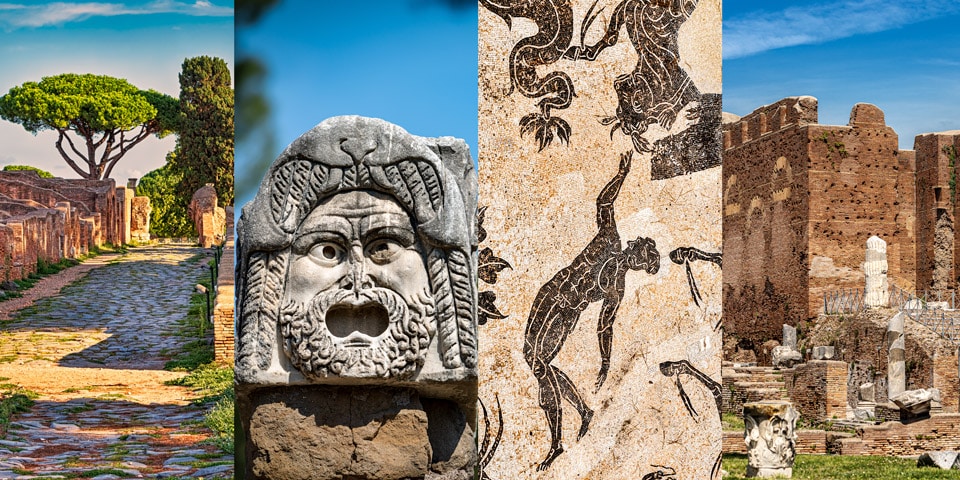 Ostia Antica is a large archeological site near Rome on the Tiber River. It had the status of Rome’s harbor or port city during ancient times. However, after the Roman Empire fell, the city became abandoned and remained untouched and preserved for centuries. Today, the Roman ruins of Ostia Antica, which served as the old city’s seaport, attract visitors worldwide.

In 400 B.C., Rome conquered the city and made it a naval base. By 150 A.D., Ostia served as a commercial Rome’s ancient Port. However, with the fall of Rome, the Port was abandoned, and the harbor silted up over time.

A small museum of Ostia offers statuaries of tangled wrestlers, kissing cupids, and gods, where most of the artworks are from the 2nd-3rd-centuries A.D. Most of the masterpieces are inspired by Greek originals, and many of them are from different religions. Since Ostia was a port, it accommodated people from all world.

Nowadays, you can walk on a vast territory full of ruins and unique buildings that went through centuries. The main street, Decumanus Maximus, was once full of carrucas, the four-wheeled carts ferried merchandise and luggage between Rome and Ostia. Moreover, two-wheeled cisia was used as public transportation for commuters.

One of the main sites to see is Ostia’s amphitheater

Founded in 12 B.C., it is a magnificent and well-preserved building, which fascinates with its size and beauty. Behind the theater is the Forum of Corporations, which served as the building with the offices of sixty-four maritime companies. You will still find mosaic names, pictures on the ground in front of each office, and a covered corridor.

In the age of Emperor Claudius, the place was raised by a second level to create the seats of the collegia, which is the association of trades for business making. The Temple of Ceres is in the middle of the Forum. Also, there are the Baths of Neptune with mosaics of the sea god. Additionally, the site is right near the modern café, where you can book a tour. 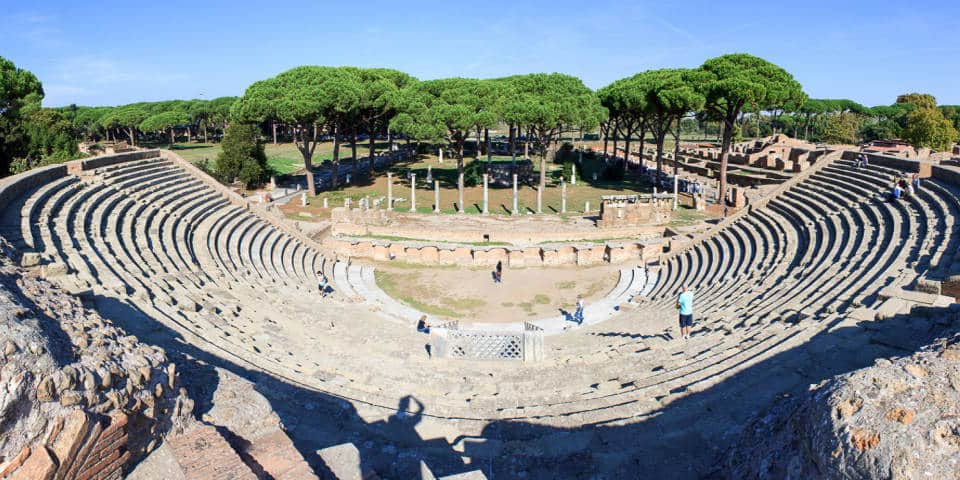 Don’t forget about the high podium of the Collegiate Temple. Interestingly, it was a social club for men of the poorer classes, where they afforded themselves a kind of a banquet while the rich could afford it daily. The dinners began at 3 pm and lasted until the sun’s rise.

Women weren’t invited to the banquets

Moreover, enslaved people were doing washings in the small terracotta tubs on the brick counters. Their heads were shaved as a distinguishing sign. The laundry is located near the public baths.

Ostia reached 50,000 inhabitants during its development, but around the third century A.D., a deep crisis decreased trade and commerce. Consequently, part of the inhabitants left the city. After the fifth century A.D., there economic recovery of the city led to the move of all commercial and administrative activities to the Port of Trajan. In addition, the Port was highly protected from storms and enemy incursions.

At the center of the square, the temple was built over a podium in the age of Emperor Domitian, among gardens and open spaces decorated with statues.

The three Masks turned to the stage of the Theater.

How to get to Ostia Antica from Rome

The most economical way to get to the archaeological site of Ostia Antica from Rome is by public transport. Since Ostia is part of the metropolis of Rome, a city ticket is enough for the trip, costing 1.5 euros and valid for 100 minutes.

First, you must get to Pyramide metro station (blue line B). Then Get to Porta San Paolo and take the first train of the line Roma-Lido di Ostia, stopping at Ostia Antica. Trains leave every 20 minutes, and travel time is about 30 minutes.

See detailed instructions with photos on how to get to Ostia from Rome by train.

A private transfer is the most comfortable way to get to Ostia Antica from Rome. You will be picked up right at the hotel and taken directly to the entrance to the archaeological complex. A round trip will cost 120 euros for a group of up to 4 people. The trip in a premium-class car with air conditioning will take about 35-40 minutes. To book a trip, I recommend contacting the most punctual transfer service in Rome, Sergio & Partners.

Is Ostia Antica worth visiting?
Ostia Antica is a worthy visit to the archaeological site; in terms of its scale and historical value, it is in no way inferior to the famous Pompeii. Ostia is also much closer to Rome than Pompeii and can be reached in a day trip format.
Where better to go for a day trip from Rome to Ostia Antica or Pompeii?
You should know that a trip to Pompeii from Rome will be exhausting and expensive, and a one-way trip takes at least 4 hours. Given its location, Ostia Antica is the smarter choice for exploring the ruins of the ancient city.
How long does it take to see Ostia Antica?
To see all the ruins of Ostia Antica, you will need 2 to 3 hours.
Why is Ostia Antica so well preserved?
Ostia Antica is well preserved as it was covered with silt from the nearby Tiber River, which also had a protective effect. Of course, it is fortunate that such a significant monument of the ancient world has survived to this day.
When was Ostia Antica built?
Ostia has founded at the mouth of the Tiber River around 620 BC. The main value of this place for ancient people was salt collected from nearby salt marshes, which served as a preservative for precious meat.
Why was Ostia Antica abandoned?
In the 3rd century, Ostia finally lost its importance to the neighboring Port, which gradually became the center of Rome's economic activity. Over the following centuries, the population continued to decline, helped by the cessation of the aqueduct. The townspeople finally abandoned Ostia in 846 after Saracen pirates sacked it.

Ostia Antica is an excellent choice for a day trip because it is located near Rome and there are many things to explore. Also, your children will like this city because there are many buildings and lots of space to run and play games. Undoubtedly, Ostia Antica is full of the history and beauty of ancient ruins.

Ostia Antica is an excellent alternative for Pompeii – a well-preserved city with fewer tourists. Thank you for the article!

One-day trip to Tivoli from Rome

Trip from Rome to Alberobello