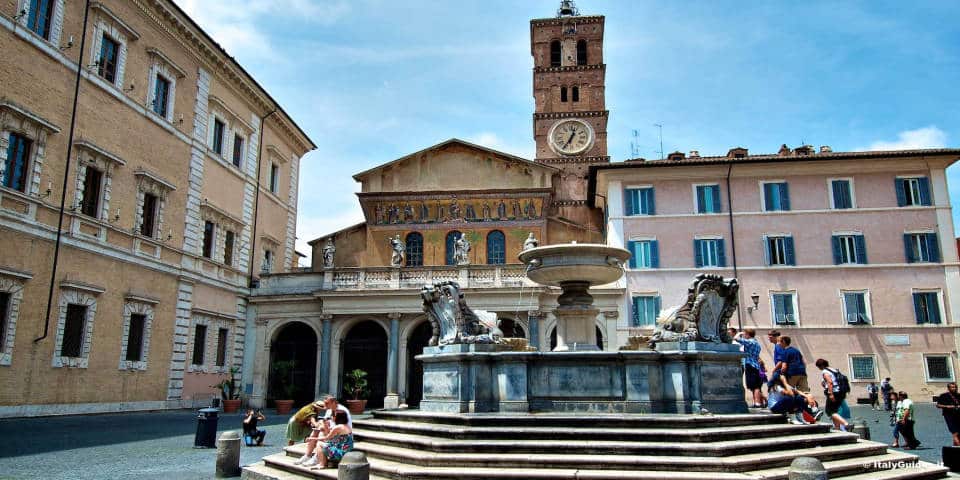 The Basilica of Santa Maria in Trastevere in Rome was found in the third century and commissioned by Pope Callistus I when Christianity wasn’t widely accepted. Located on the beautiful piazza in the famous Trastevere district, the church contains 12th-century mosaics. The church’s opening hours are from 7.30 am to 9 pm, and the entrance is free.

Santa Maria in Trastevere was founded by Pope Callistus I (217-22) but was built around 350 A.D. under Pope Julius I (337-52). During that period, the church was known as Titulus Callisti. Moreover, the basilica was partially destroyed by fire during the sack of Rome in 410. Eventually, it was reconstructed and rededicated to the Virgin Mary by Pope Celestine (422-32).

Another reconstruction was made by Pope Hadrian I (772-95). After, Pope Gregory IV (827-44) added a crypt to maintain the bodies of the popes Callistus, Julius I, and Cornelius, who were exhumed from the catacombs. Also, Pope Leo IV (847-55) and Benedict III (855-58) made renovations to the apse. 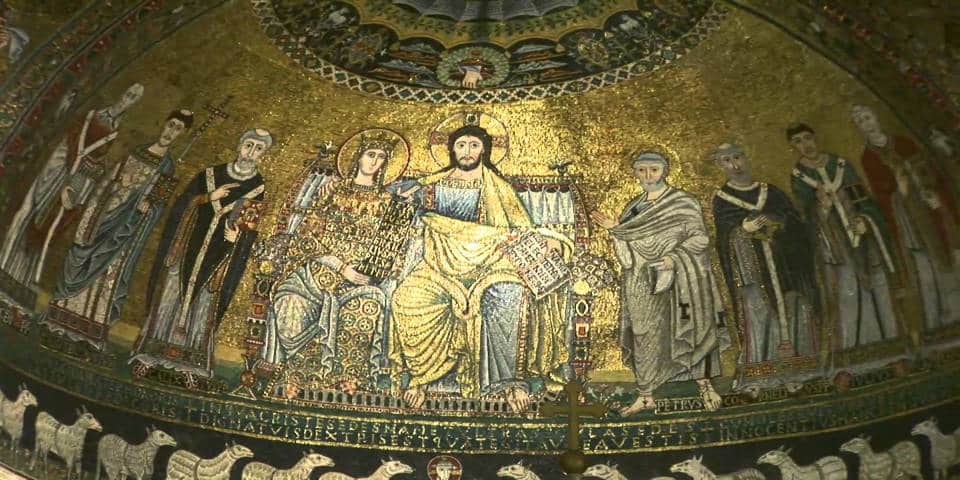 The current structure contains a Romanesque bell tower and a 12th-13th-century mosaic on the façade of the Madonna della Clemenza and ten women. At the entrance, you will see the sculpture of San Antonio, famous for granting wishes. It is a popular tradition among tourists and locals to make a wish during the visit to the basilica.

There is a myth that when Christ was born, a stream of pure oil flowed from the Earth on the site where Santa Maria in Trastevere is located, which meant the coming of the grace of God. Moreover, the column near the altar marks the spot.

The octagonal fountain in the center of the piazza was restored in the 17th century by Carlo Fontana. It is the Roman original and is a famous gathering place for locals and tourists. The portico is a 19th-century addition with fragments from the earlier temples, dating back from the 4th to 9th centuries. 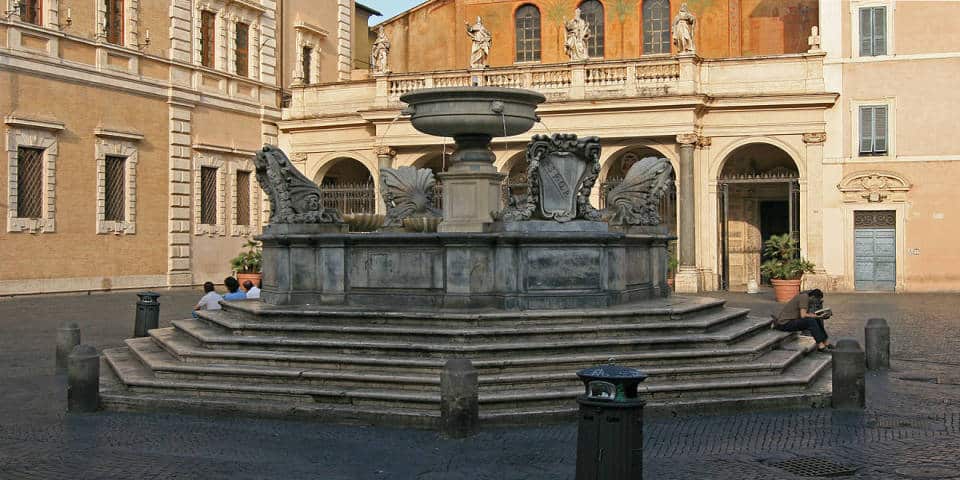 The triumphal arch of Santa Maria di Trastevere depicts the Four Evangelists, the prophets Isaiah and Jeremiah, caged birds as an embodiment of sins, seven candlesticks, and a Christogram.

The mosaics on the apse vault and triumphal arch are from the 12th century. The apse vault presents the coronation of the Virgin with saints and Pope Innocent II holding a model of the basilica. Moreover, the six mosaic panels, lower on the apse, were made by Pietro Cavallini. On the left side of the altar is the Altemps Chapel (1588) with Baroque decoration.

Also, Pope Callistus I and Lorenzo Cardinal Campeggio were buried in the basilica. 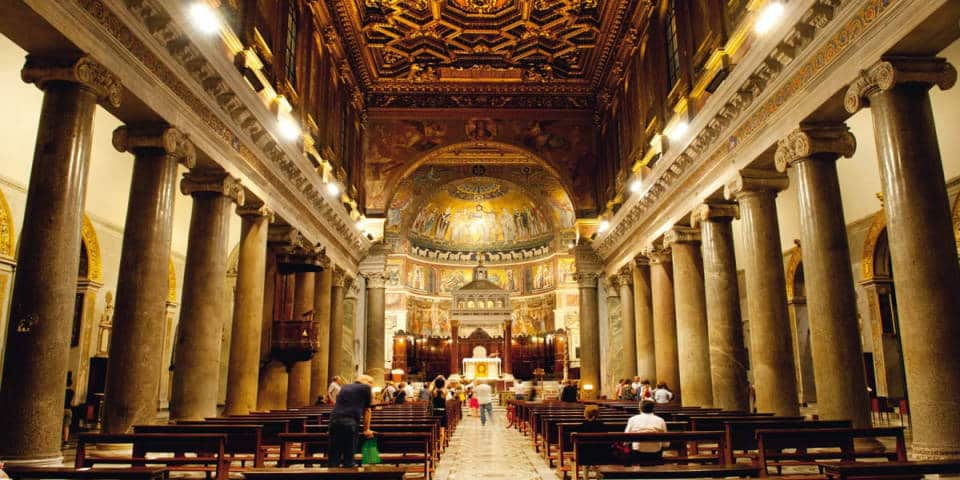 Hotel Santa Maria located near the basilica is a 3-star hotel with beautiful rooms. It has a great location because many restaurants have inexpensive dishes and high-quality ingredients. Moreover, most Roman famous sites can be reached within a foot walk. 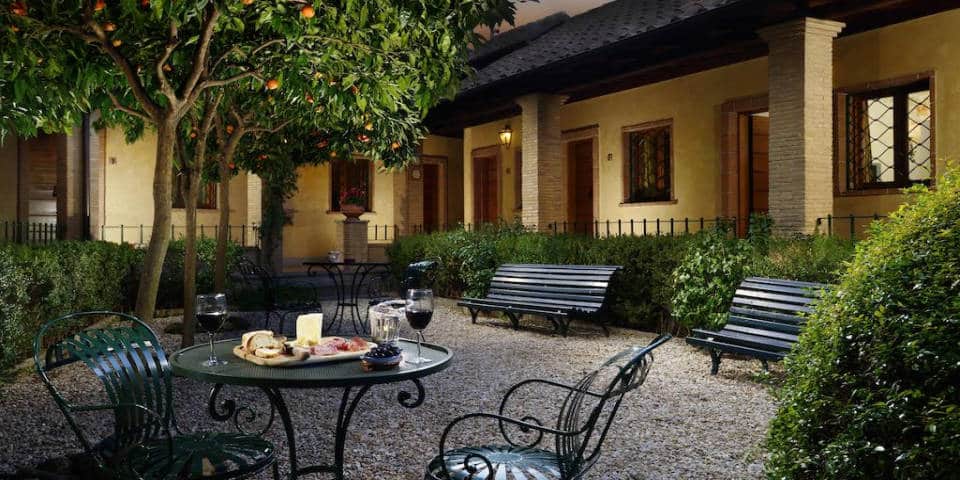 The basilica of Santa Maria in Trastevere s one of the most remarkable churches of Rome, which gathers many tourists daily. Moreover, it has a great location in the heart of beautiful Trastevere, where you can visit one of the local or international restaurants and enjoy the atmosphere of the old city.