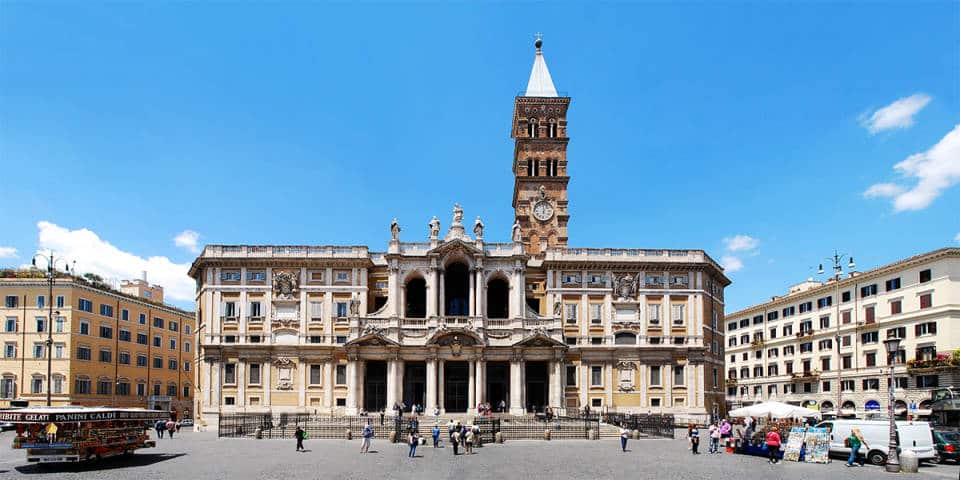 The Basilica reveres the worshiped image of Salus Populi Romani, portraying the Blessed Virgin Mary as the help and protectress of the Roman people, which was granted a Canonical coronation by Pope Gregory XVI on 15 August 1838 accompanied by his Papal bull Cælestis Regina. 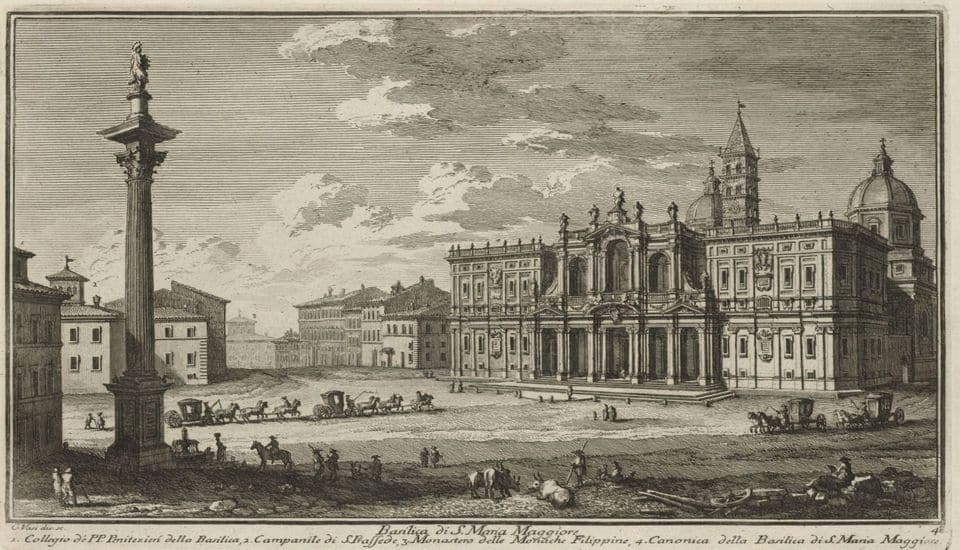 According to the Lateran Treaty of 1929 between the Holy See and Italy, the Basilica is inside the Italian domain and not the territory of the Vatican City State. Be that as it may, the Holy See wholly owns the Basilica, and Italy is legitimately committed to recognizing its full possession and conceding to it “the immunity granted by International Law to the headquarters of the diplomatic agents of foreign States.”

The Basilica of Santa Maria Maggiore was built in place of a pagan temple dedicated to the goddess Cybele. The current construction was finished in 1584 under the orders of Pope Liberius.

According to the legend, the Virgin appeared before the Pope with the instructions for building the church, and the shape of the floor was designed based on a miraculous snowfall

Previously, the Basilica was also called Saint Mary of the Snow (because of the snow that led to the shape of the church), Santa Maria Liberiana (for Pope Liberius), Saint Mary of the Nativity (because it received a relic of the Holy Nativity). Finally, the church became known as Santa Maria Maggiore since it is the largest of the 26 churches in Rome dedicated to the Virgin Mary.

The Basilica represents several architectural styles, from early Christianity to Baroque. It was renovated during the 18th century. Moreover, Santa Maria Maggiore retains the bell tower, where mosaics and marble floors are from the medieval period, and some Ionic columns from ancient Roman buildings. 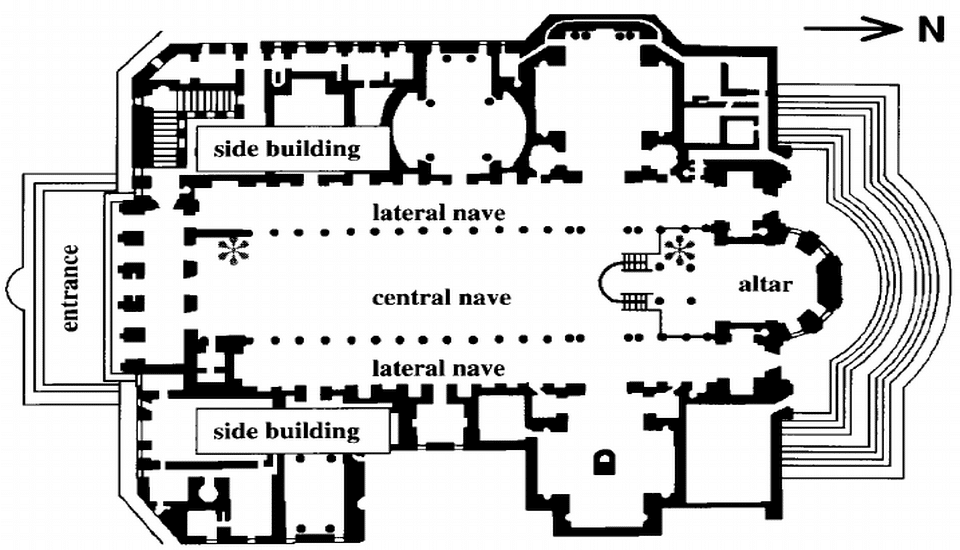 Although Santa Maria Maggiore is gigantic in its area, it was built to plan. The design of the Basilica was an ordinary one amid this time in Rome: “a tall and wide nave; an aisle on either side; and a semicircular apse at the end of the nave.” The key viewpoint that made Santa Maria Maggiore a significant cornerstone in the church building during the early 5th century was the beautiful mosaics found on the triumphal arch and nave.

The Athenian marble columns supporting the nave are older and either come from the primary Basilica or another antique Roman building; thirty-six are marble and four granite, pared down, or shortened to create them identical by Ferdinando Fuga, who provided them with similar gilt-bronze capitals.

The 14th century campanile, or bell tower, is the most elevated in Rome, at 246 feet, (approximately 75 m.)

The Basilica’s 16th-century coffered ceiling, to a design by Giuliano da Sangallo, is said to be overlaid with gold, at first brought by Christopher Columbus, presented by Ferdinand and Isabella to the Spanish pope, Alexander VI. The apse mosaic, the Coronation of the Virgin, is from 1295, marked by the Franciscan monk Jacopo Torriti. The Basilica moreover contains frescoes by Giovanni Baglione within the Cappella Borghese. 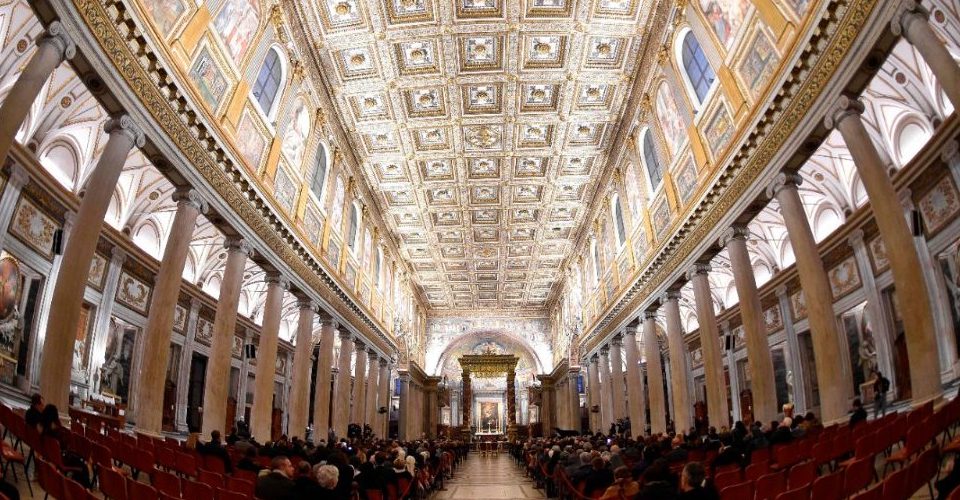 The 12th-century façade has been masked by a recreation, with screening loggia that was included by Pope Benedict XIV in 1743, to designs by Ferdinando Fuga that did not harm the mosaics of the façade. The wing of the Canonica (sacristy) to its left and a matching wing to the right (planned by Flaminio Ponzio) give the Basilica’s front the perspective of a palace confronting the Piazza Santa Maria Maggiore. To the right of the Basilica’s façade is a memorial representing a column in the form of an up-ended cannon barrel topped with a cross: it was erected by Pope Clement VIII to celebrate the end of the French Wars of Religion.

The Marian column, erected in 1614 to designs of Carlo Maderno, is the demonstrate for numerous Marian columns erected in Catholic countries in thanksgiving for remission of the plague amid the Baroque era

Crypt of the Nativity and Cappella Sistina

Under the high altar of the basilica is the Crypt of the Nativity or Bethlehem Crypt, with a crystal reliquary designed by Giuseppe Valadier said to contain wood from the Holy Crib of the nativity of Jesus Christ. Here is the burial place of Saint Jerome, the 4th-century Doctor of the Church who translated the Bible into the Latin language (the Vulgate)

Parts of the design of the Nativity accepted to be by 13th-century Arnolfo di Cambio were transferred beneath the altar of the large Sistine Chapel off the right transept of the church. This chapel of the Blessed Sacrament is named after Pope Sixtus V and isn’t to be confused with the Sistine Chapel of the Vatican, named after Pope Sixtus IV. The architect Domenico Fontana planned the chapel, which contains the tombs of Sixtus V himself and his early patron Pope Pius V. The main altar within the chapel has four gilded bronze angels by Sebastiano Torregiani, holding up the ciborium, which is a model of the chapel itself. 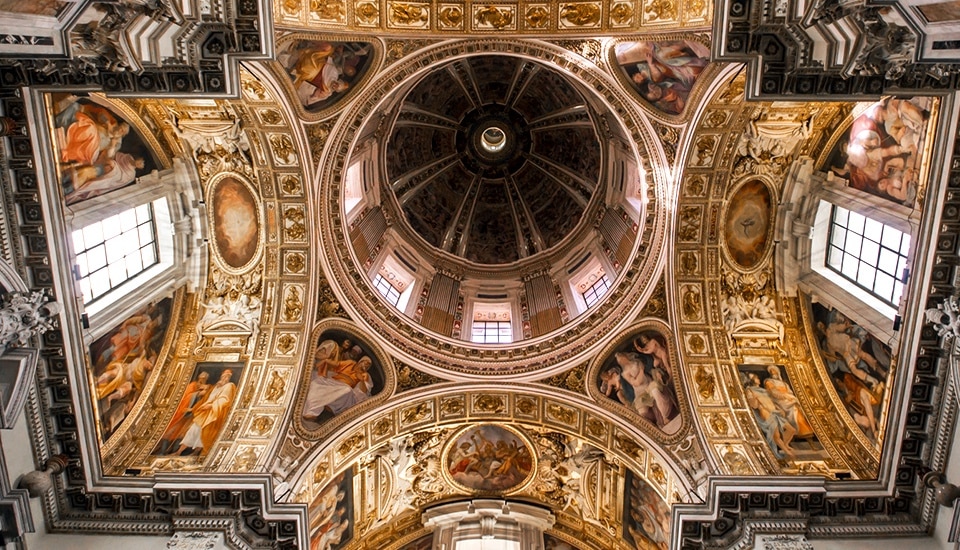 Beneath this altar is the Oratory or Chapel of the Nativity, on whose altar, at that time arranged within the Crypt of the Nativity below the main altar of the church itself, Saint Ignatius of Loyola celebrated his first Mass as a priest on 25 December 1538. 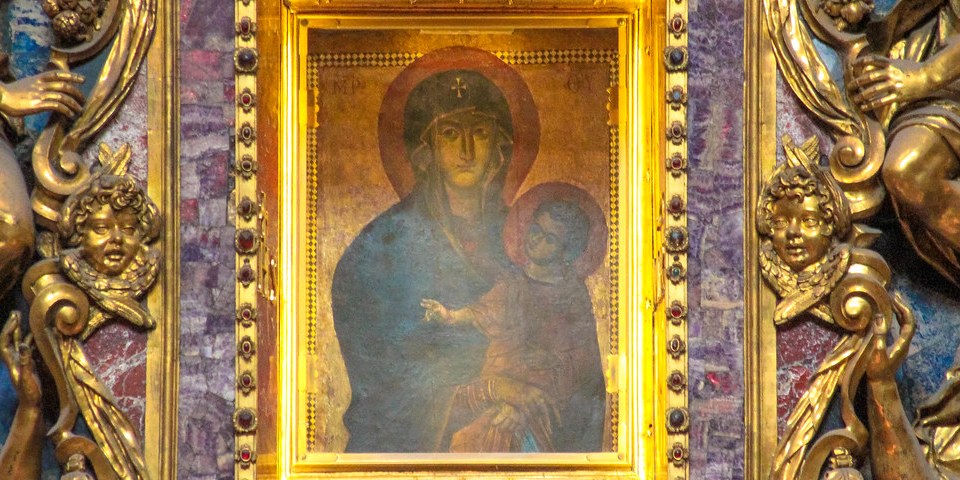 The column in the Piazza Santa Maria Maggiore celebrates the famous icon of the Virgin Mary presently revered within the Borghese Chapel of the Basilica. It is known as Salus Populi Romani, or Health of the Roman People, or Salvation of the Roman People, due to a miracle in which the icon reportedly helped keep the plague from the city. The icon is at least a thousand years old and, agreeing to a tradition, was painted from life by St Luke the Evangelist using the wooden table of the Holy Family in Nazareth.

The Salus Populi Romani has been a favourite of several popes and acted as a key Mariological symbol.

As a papal basilica, the pope frequently uses Santa Maria Maggiore. He presides over the rites for the annual Feast of the Assumption of Mary on 15 August. Except for some priests and the Basilica’s archpriest, the canopied high altar is reserved for use by the pope alone. Pope Francis visited the Basilica on the day after his election.

The pope gives a charge of the Basilica to an archpriest, ordinarily a cardinal. Once in the past, the archpriest was the titular Latin Patriarch of Antioch, a title abolished in 1964. Since 29 December 2016, the archpriest has been Stanisław Ryłko.