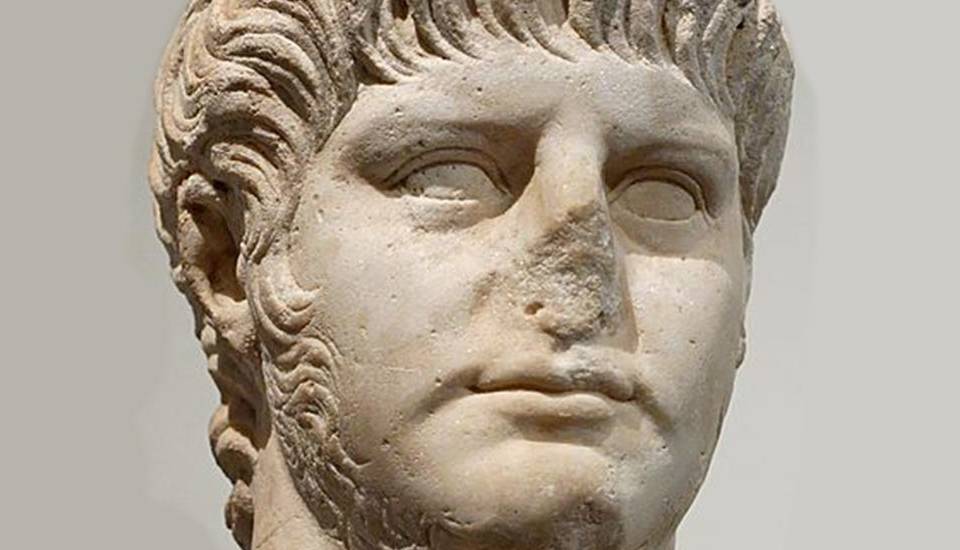 Nero Claudius Caesar Augustus Germanicus (15 December 37 AD – 9 June 68 AD) was the last Roman Emperor of the Julio-Claudian dynasty. His great-uncle Claudius adopted him, so Nero became the successor. Moreover, Nero has proclaimed an Emperor with the consent of the Praetorian Guard. His mother was Agrippina the Younger, who most probably was implicated in the death of Claudius because she wanted Nero to become an emperor. However, even if she managed to influence her son’s early life decisions and acts, five years after his reign Nero murdered his mother.

In the first years of the reign, Nero was highly influenced in his decisions and achievements by his mother, tutor Lucius Annaeus Seneca and his Praetorian prefect, Sextus Afranius Burrus

However, later, he became more independent and started to play an active role in the development of the government and foreign policy. Nero was famous for his diplomatic skills and he developed the cultural life of the empire because he commissioned the building of theatres and promoted athletic games. His hobby was making public appearances as a poet, actor, or musician. His empire-wide program of public and private works led to the rise in taxes. Moreover, Nero executed many people among whom were numerous conspirators, who wanted to assassinate the emperor for his extravagant way of reign.

Nero was born with the name Lucius Domitius Ahenobarbus in 37 AD but renamed Nero Claudius Caesar Augustus because his mother, Agrippina the Younger, married Emperor Claudius in 49 AD, who adopted Nero in 50 AD. Nero’s father was violent and died when his son was only three years old. Agrippina the Younger was the daughter of Agrippina the Elder and the great-granddaughter of Emperor Augustus. Nero’s father died when at the age of 40 and he was involved in a political scandal several years before his death.

One of the most notable for cruelty and insanity was Emperor Caligula, who reigned from 37 AD until 41 AD, and died from multiple stab wounds made by his own Praetorian Guard on the Palatine Hill. Claudius succeeded Caligula as Emperor, so Nero’s mother married him. Agrippina persuaded Claudius to adopt Nero. She planned to make Nero the next emperor and rule the empire by influencing his decisions.

Nero officially entered public life as an adult in 51 AD, when he was around 14 years old

At the age of 16, Nero married the daughter of Claudius, Claudia Octavia. During the same period, he gave several speeches about various communities including the Ilians, and the Arameans, asking for a five-year tax delay after an earthquake. Also, about the northern colony of Bologna since their settlement suffered a destructive fire.

Emperor Claudius died in 54 AD. According to the historical facts, he was poisoned by his wife Agrippina. Before the realization of her plan, she put all her efforts to replace the guard officers with men loyal to her. Consequently, Nero became a new ruler of the empire without incident.

According to famous historians like Tacitus, Suetonius, and Cassius Dio, Nero’s building projects were too extravagant and costly. He became an emperor at the age of 16, which made him the youngest sole emperor until Elagabalus, who became a ruler of the empire when he was 14 in 218 AD. The future Emperor Trajan described Nero’s reign as Quinquennium Neronis, but the interpretation of this phrase is ambiguous. When Nero was proclaimed Pharaoh of Egypt, he adopted the titulary Autokrator Neron Heqaheqau Meryasetptah Tjemaahuikhasut Wernakhtubaqet Heqaheqau Setepennemu Merur, which means Emperor Nero, Ruler of rulers, chosen by Ptah, beloved of Isis, the sturdy-armed one who struck the foreign lands, victorious for Egypt, ruler of rulers, chosen of Nun who loves him.

At the beginning of his leadership, Nero promised to follow the Augustan model in his principate, remove all treasury trials of Tiberius, finish the corruption and respect the privileges of the Senate and individual Senators. Agrippina wanted to rule through her son and she murdered political rivals. In addition, one of the first coins issued by Nero was with the depiction of Agrippina. Most people welcomed the new emperor during the first period of his reign, so his first part of leadership was considered a mini-golden age. Moreover, Nero restored much of the Senate’s power, which was lost in the last years.

Nero organized lavish games, plays, concerts, gladiator battles and taxes were reduced, so populace considered him to be generous and smart

Agrippina was an overly protective mother, who wanted to be the true force behind her son. She even managed to spread her influence to others. However, Nero did not like the way his mother pushes on him and moved her out of the palace. Later, he denied her the protection of her Praetorian Guard and banned Agrippina from all gladiatorial contests. When she realized that loses her power, Agrippina started to fight back by throwing her support behind Britannicus, who was Nero’s stepbrother and son of Claudius. However, Claudius mysteriously died at a family banquet because of food poisoning. Agrippina realized that she was next.

Nero planned the death of his mother together with specialists from Alexandria. First, he wanted to elaborate a device created for the bedchamber ceiling which would collapse and crush on her while she sleeps. However, the structure was too complicated. His second plan was to create a boat that would collapse and sink, but Agrippina swam to the shore. Finally, he just stabbed to death his mother, but this death started to haunt him for the rest of his life.

Nero was married to Octavia, the daughter of Claudius and Messalina, but had affair with Poppaea Sabina. In reality, Agrippina detested Poppaea Sabina and forced Nero to marry Octavia. To marry the woman whom he loved, Nero accused Octavia of adultery and exiled her. Moreover, the daughter of Claudius was murdered soon, but Nero made it look like a suicide. However, Nero’s second marriage wasn’t happy. Poppaea and Nero’s child died after her birth, while Pappaea’s next pregnancy ended in tragedy for both. It was the fault of Nero, who kicked her in the stomach while they were arguing, so she and her unborn child died.

Great Fire of Rome and Other Disasters

The reign of Nero was notable for numerous catastrophes. Among them was the Piso Conspiracy, which aimed to kill Nero. At least nineteen senators and other leaders were involved in this conspiracy. However, failure of the plan led to the execution of forty-one persons. Most importantly, it led Nero to become forever paranoid and untrusting of others. Later, there was failed Boudicca rebellion happened in Britain. Also, there were many insurrections in nearby provinces together with Gaul and Judea.

Undoubtedly, the main event and threat to Nero’s reign were the Great Fire, which began on July 19, 64 AD, and lasted for six days. Rome was divided into fourteen districts, where ten of them became destroyed, hundreds of people died, and thousands became homeless. There are still many questions about this fire, where two main among them are: “Did Nero play his lyre while the city is burned? Did he start it?” There are two versions of the beginning of the fire. On the one hand, historians assume that Nero started the fire and was watching it from the Tower of Maecenas; on another hand, the blame fell on the persecuted Christians who had always considered Nero the anti-Christ.

To rebuild Rome, Nero had to raise taxes. After the reconstruction, the city became better than ever: wider streets, new brick buildings, and beautiful colonnades

Nero’s life wasn’t easy and there were too many insurrections, conspiracies, and other negative events. Moreover, he was proclaimed an enemy of the public by the Senate. Consequently, Galba became the new emperor. When Nero understood that he is not emperor anymore, he attempted suicide in the villa of his freedman Phaon, but failed to do it by himself and needed help to die. His last words were: “What an artist dies in me.”

Emperor Nero was an extraordinary brutal personality, famous for his paranoid character.
In his life there were many conflicts leading to negative events. The last words of Nero were “What an artist dies in me.”