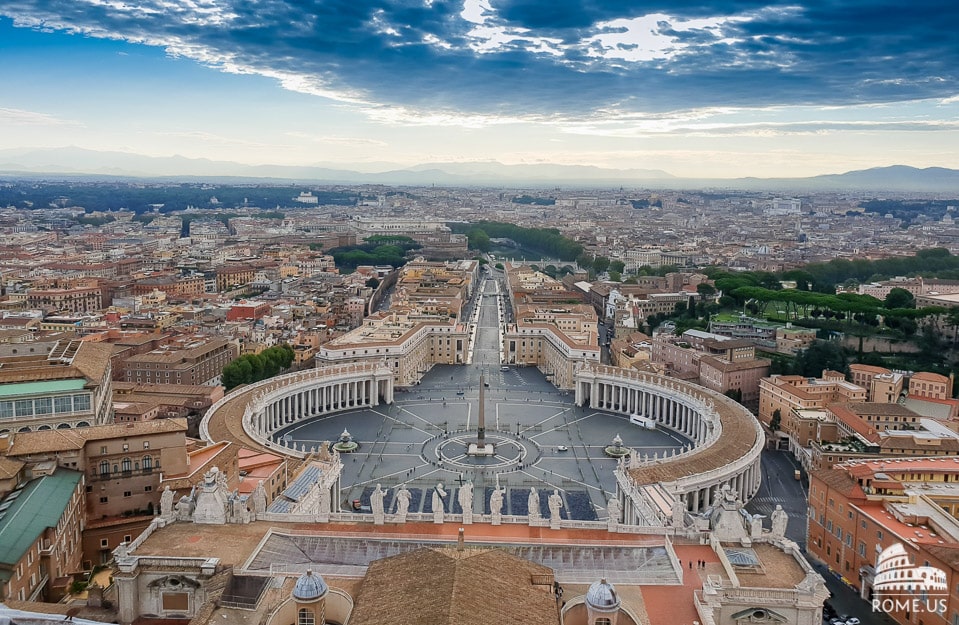 St Peter’s Square (Piazza San Pietro) in the Vatican City State is one of the most famous squares in the world, which houses over 300.000 people. It was designed by Gian Lorenzo Bernini and had dimensions of 320 meters long and 240 meters wide. The square was named after Saint Peter, an apostle of Jesus and the first Catholic Pope.

The construction of the square took place between 1656 and 1667 by the famous sculptor and architect Bernini under the commission of Pope Alexander VII. As soon as the Pope was elected, the project of the square was created, and the working process was begun, following Alexander’s detailed instructions. The piazza has a trapezoidal shape, which creates a heightened perspective for a viewer leaving the basilica. Moreover, according to the Lateran Treaty (1929), the area of Saint Peter’s square belongs to the authority of the Italian police for the control of visitors. However, it is part of the Vatican City State.

In 1817, circular stones were added to mark the top of obelisk’s shadow at noon since the sun entered each of the signs of the zodiac. This effect makes the obelisk a large sundial’s gnomon 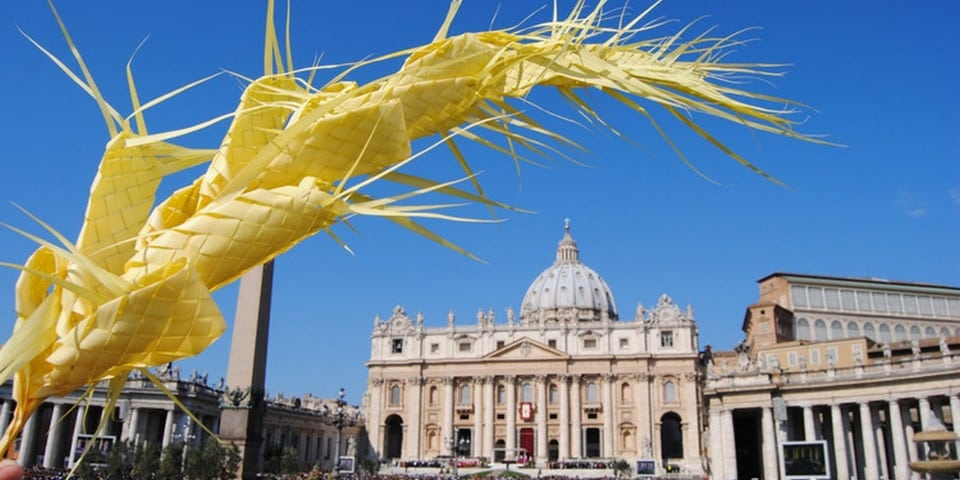 Saint Peter’s Square has bordered on two sides by semi-circular colonnades. According to Bernini, these colonnades represent the stretched arms of the church, which embraces the world. To the left and right of the obelisk, you can see the circular marble plates that indicate the foci of the elliptical square. Interestingly, when you stand on either of these plates and look at any colonnade in the square, it will look as if there is only one row of columns instead of four. This trick shows Bernini’s talent as a sculptor or architect and his knowledge of geometry.

There are about 400.000 people who come to the square on special occasions such as the election of a new pope or Easter celebration

Of course, the square’s main building is St Peter’s Basilica with its impressive dome. There are always long queues in the square because people worldwide come daily to visit this great square and the most prominent church, which was built between 1506 and 1626 and borders St Peter’s Square to the west. Moreover, you can see representatives of the Pontifical Swiss Guard during your visit to the smallest government in the world and even ask them for a ticket to the Papal Mass if you have more than 2-3 days in Rome. 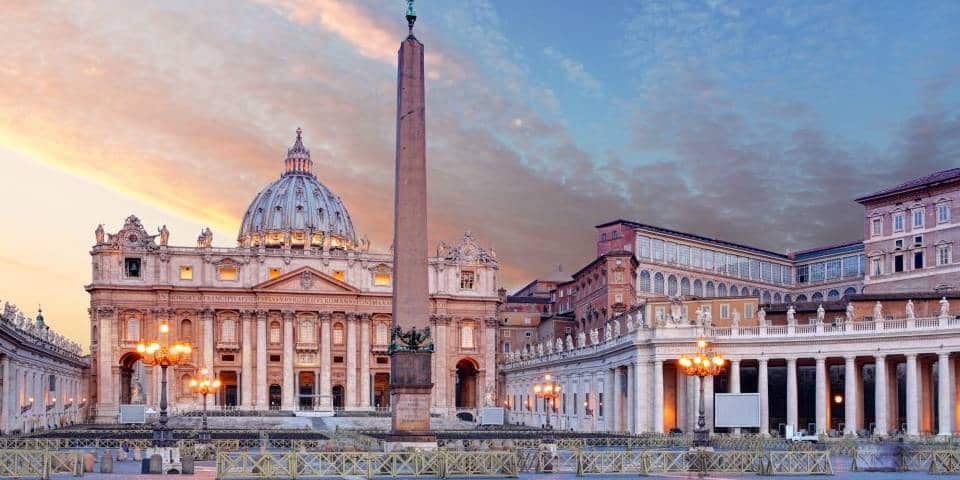 The square is spacious, and there are many details worth attention too.

In the center of Saint Peter’s Square stands the obelisk, 25.5 meters tall or 41 meters, including the pedestal. It was carried to Rome from Heliopolis in Egypt in 1586 and had an exciting history. The obelisk was built for Cornelius Gallus, who was the city’s perfect. In 37 AD Emperor Caligula asked to move the construction to Rome with a unique ship. The obelisk was installed at the spine of the Circus of Caligula, which later became the Circus of Nero, located on the current Vatican City State territory. 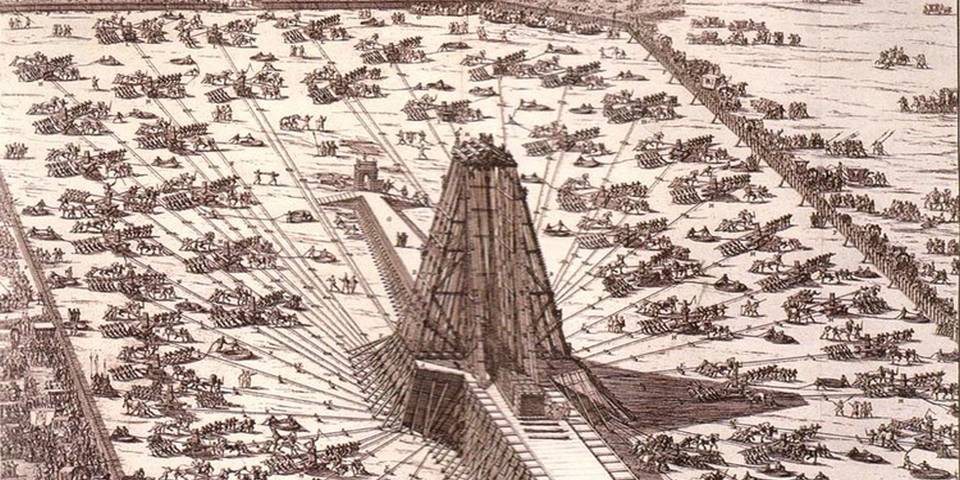 After several centuries, in 1585, Pope Sixtus V decided to move the obelisk to its present location, which is about 300 meters from the previous point where it stood. The relocation became a severe task, and even Michelangelo claimed it was impossible. Finally, however, the Pope commissioned Domenico Fontana with the transportation to realize his idea. It took 900 people and more than 100 horses to relocate the obelisk. But during the process of moving it, the Pope forbid anyone to speak in the square since there were too many visitors who wanted to see the process of realization of the project, which seemed unbelievable.

However, the ropes were on the verge of breaking, and people became scared that the obelisk could fall. One sailor yelled against the pope’s order:“Water on the ropes!” Fortunately, the workers heeded his advice. The water-cooled down the ropes, and the sailor saved the lives of many people and the obelisk itself. Despite the sailor breaking his decree, Sixtus V decided not to punish him. But instead, the pope thanked the man and rewarded him. Furthermore, the sailor asked that his family’s farm in Bordighera supply the palms for Palm Sunday every year because it was their family business.

Even today, the Vatican sources their Palm Sunday fronds from Bordighera 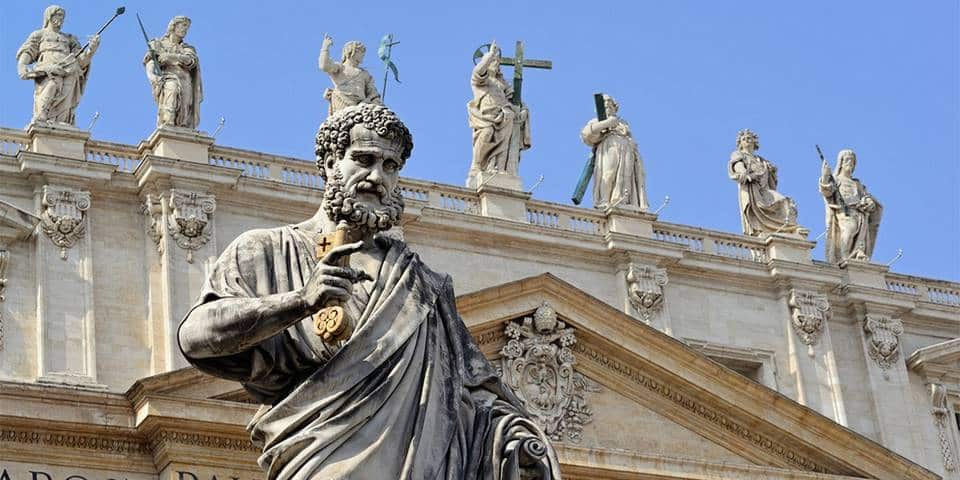 One of the first things that catch your attention when you come to the square is an impressive colonnade of four rows. There are 284 columns and 88 pilasters that flank the square. The Doric columns are 20 meters high and 1.6 meters wide. Moreover, there are 140 statues of different saints created in 1670 by famous Bernini and his students. The statues depict popes, martyrs, evangelists, and other important religious figures. 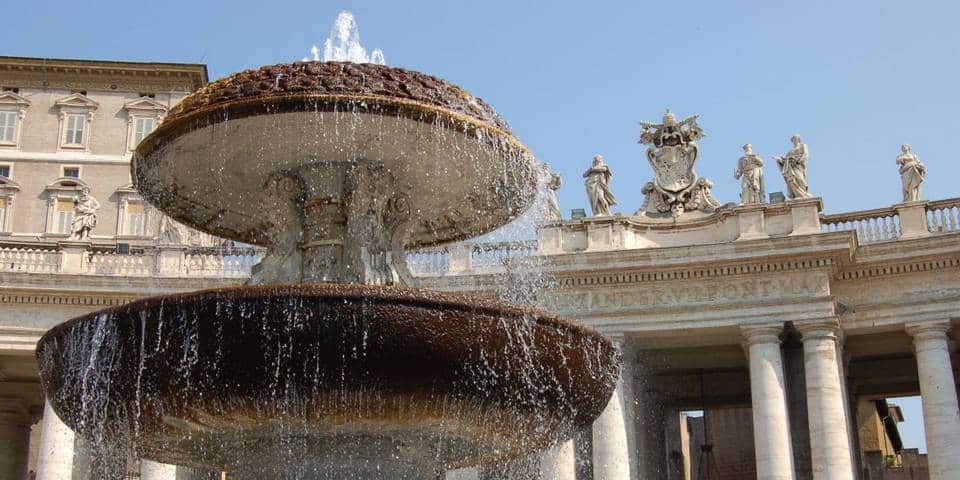 There are two fountains in the square: one by Gian Lorenzo Bernini (1677) and another one by Carlo Maderno (1613). To maintain the symmetry of the fountain by Maderno, Bernini decided to create an identical copy of the fountain on the left side of the square. Consequently, the fountain was created by Carlo Fontana, according to the project Bernini.

Masses with the Pope are celebrated in St Peter’s Basilica, Saint Peter’s Square, or both. Most of the masses are inside the Basilica, which has a huge capacity and can host more than 15.000 people.

The Holy See issues different kinds of tickets: for Cardinals, Governors and Diplomats, Bishops, Priests, special guests, and public tickets. Moreover, you will need to have a ticket for most Masses. You can get it for free directly from the Swiss Guards in St. Peter’s Square at the “Bronze Door” from 8 am until 8 pm (summertime) and from 8 am until 7 pm (wintertime).

On the way to the Vatican is the Via della Conciliazione, one of the most beautiful Roman streets that begins in the Castel Sant’Angelo. What is your opinion about the Vatican? 🙂