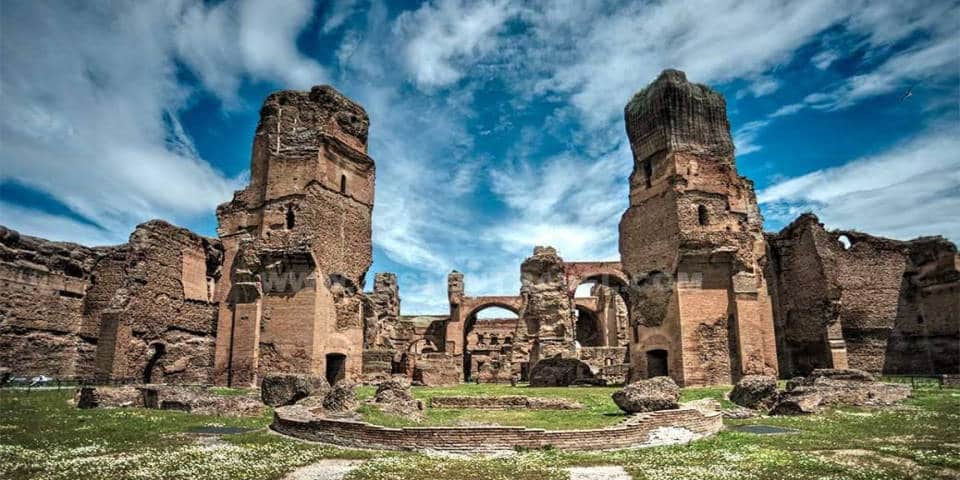 Baths of Caracalla (Italian: Terme di Caracalla; Latin: Thermae Antoninianae) are famous ancient Roman public baths constructed between 211 and 224 by the emperors Caracalla, Heliogabalus, and Severus Alexander. The site is located along the Appian Way in Rome. Considered one of the most luxurious thermal baths, it accommodated about 1600 visitors and was used up until the 6th century. Also, it is one of the most impressive archeological constructions of the Imperial epoch.

Most of the Roman population lived in overcrowded apartment buildings without water or sanitary facilities, so the baths were the solution to the problem. Moreover, they served as a place for socialization.

The baths of Caracalla contain massive columns, mosaics of glass and marble on the walls, painted stuccos, and different statues of impressive sizes. The water system goes from the main aqueduct, the Aqua Antoniana. However, the thermal baths were reconstructed several times and finally closed in 537 A.D. 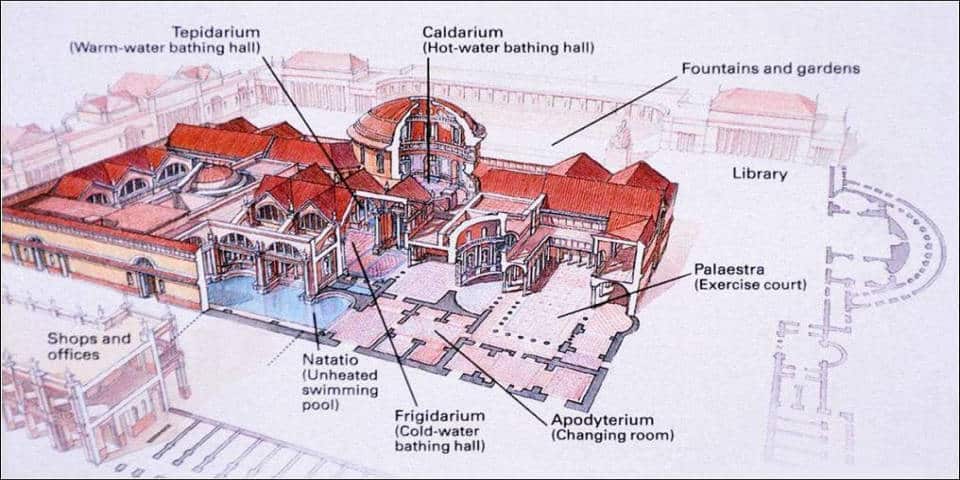 There were three large bathing rooms: the frigidarium – a cold pool, the tepidarium – a lukewarm pool, and the calidarium – a hot pool

Bathers could freely move from one room to another because the size of the thermae was huge, and even today, the ruins are massive. The walls and floor of the tepidarium and calidarium were heated by a unique system – the hypocaust. Since the floor was raised and there was a space left between the walls, the hot air was circulating through a furnace. The frigidarium was located in the middle of the construction and surrounded by two zones – Palaestra. These zones were gymnastic areas, where games and competitions were held. Additionally, there was an Olympic size pool – the Natatio, which served recreational swimming activities.Moreover, there were two libraries and beautiful gardens.

The baths of Caracalla are well preserved and contain many colorful mosaics, where some mosaic floors were removed, and now you can find them in different museums all around the world. Some of them can be seen nowadays in the Vatican Museums.

The decor consisted of the walls covered with marble slabs, while the upper register was covered with stucco. Interestingly, all the floors contained colorful mosaics and maritime figures, like sea horses or fish. There were mostly mosaics made from Egyptian grey granite, Numidian yellow marble, green-veined marble from Carystus, and green or purple polyphony from Egypt and Sparta. 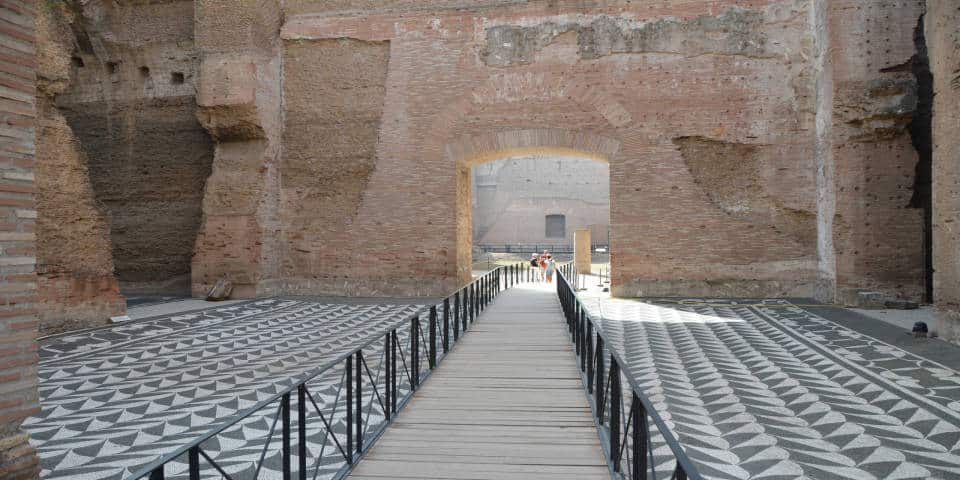 There are monumental sculptures, such as one of Hercules 10 feet 6 inches tall, found in the 16th century. 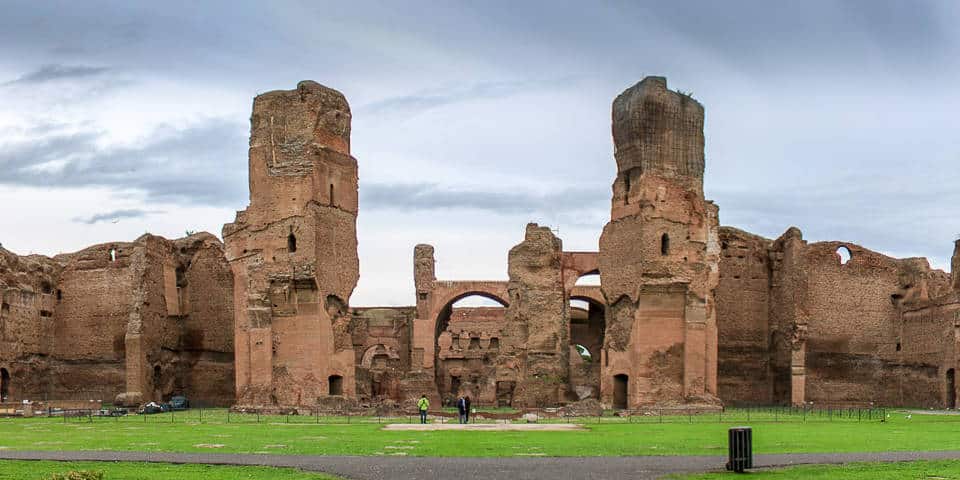 During the Renaissance epoch, Donato Bramante and Andrea Palladio used the Baths of Caracalla as an inspiration for grand structures

During the summertime, the Baths of Caracalla serve as an open-air theater called “Teatro dell’Opera” with ballet and opera performances. Examples of performances are “Aida” by Giuseppe Verdi and “Carmen” by Georges Bizet. 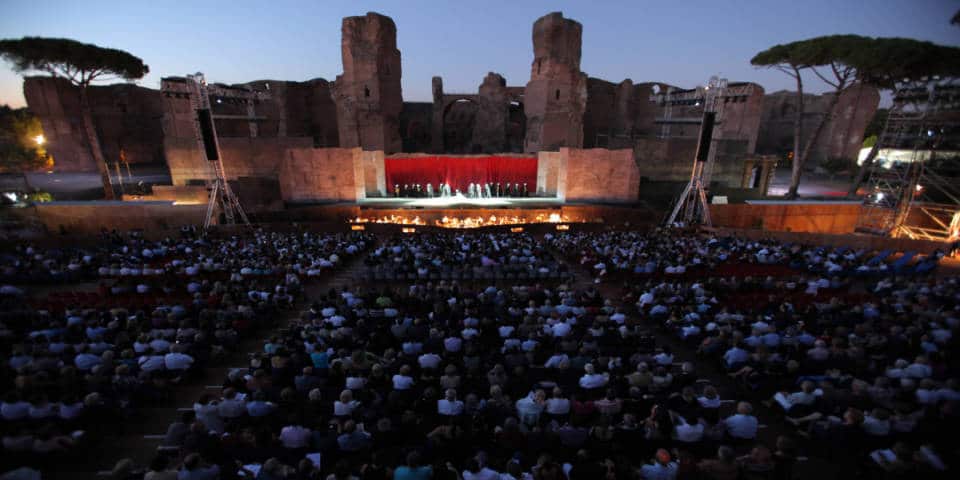 The public baths of Caracalla are one of Rome’s most ancient archeological constructions, with massive sizes and impressive history. It would be a great choice to visit this site during your Roman holidays.