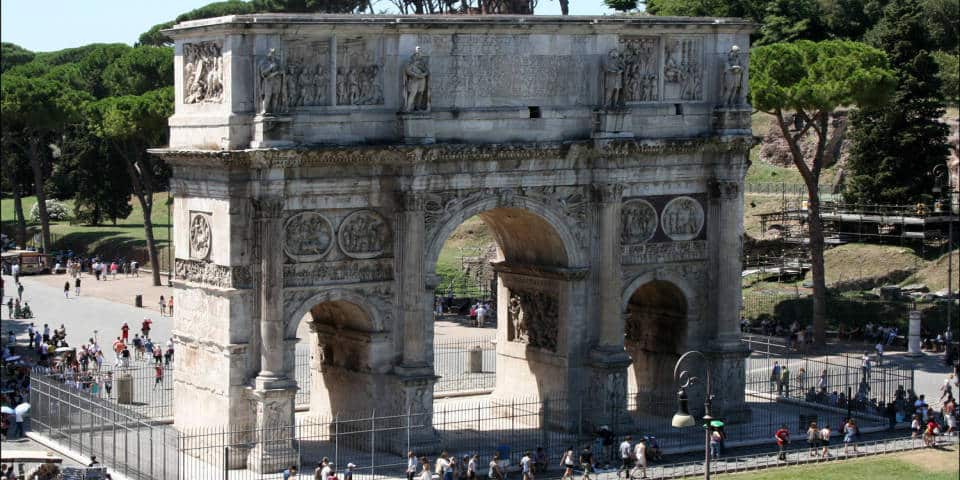 The Triumphal Arch of Constantine, erected in 315 C.E., commemorates Roman Emperor Constantine’s I the Great Victory over the Roman tyrant Maxentius at the battle of Milvian Bridge in Rome. The Arch is located along the Via Triumphalis, between the Colosseum, the Temple of Venus, and the Roma and Roman Forum. It is the most modern Roman triumphal Arch and the last monument of Imperial Rome.

The Arch was erected on 25th July 315 C.E. on the 10th anniversary of Constantine’s reign. It is 21 meters high and almost 26 meters wide. Moreover, the monument is made from grey and white Proconnesian marble. The Arch was a part of a fortress under the Frangipane in the Middle Ages before being renovated in the 15th century C.E. Also, in 1597 C.E., Pope Clement VIII removed one of the yellow marble columns. Instead, he used it in a doorway of the St John Lateran church, replacing it with a purple column. 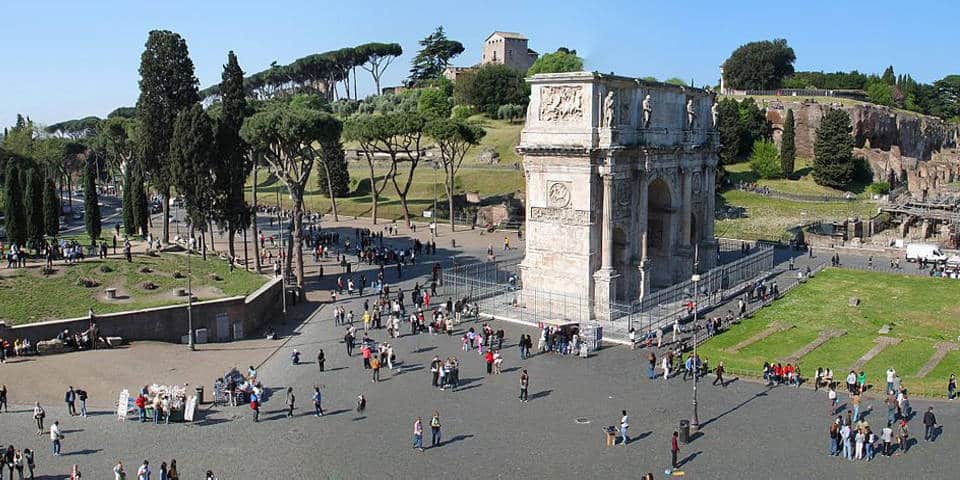 Constantine believed that his Victory over Maxentius was acquired with the help of the Christian God. Consequently, during the reign of the emperor, the persecution of Christians ended, and Christianity became the official religion in the Roman Empire. Moreover, Constantine moved the empire’s capital from Rome to Constantinople (now Istanbul) in 325A.DD.

The block above the monument’s arches presents sculpted panels and an inscription in Latin. It reads:

To the emperor Flavius Constantine the Great
pious and fortunate, the Senate and People of Rome
because by divine inspiration and his own greatness of spirit
with his army
on both the tyrant and all his
faction at once in rightful
the battle he avenged the State
dedicated this Arch as a mark of triumph.
(Claridge, 308)

The Arch is large, and many parts of it were recycled from the 1st and 2nd centuries. Monuments such as the Luna marble panels were taken from the Arch of Marcus Aurelius. There are eight marble panels on each façade, showing architectural elements where the emperor is at war or conducting his civil duties. 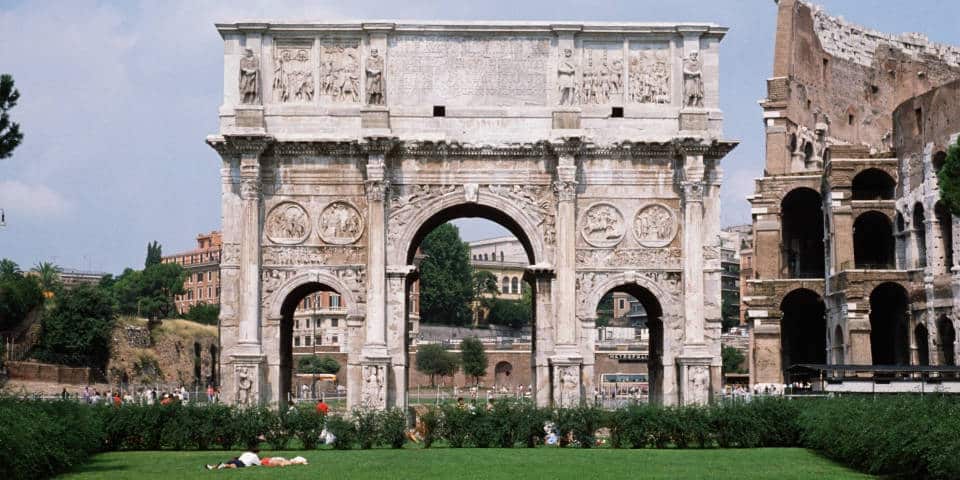 The medallions depict scenes of the lion and bear hunt or of sacrificial ceremonies in honor of Hercules, Diana and Silvanus, and Apollo. Moreover, the two inner central arch reliefs and the upper panel on each side of the monument are connected to the Great Trajanic Frieze, which was eliminated from the Basilica Ulpia in Trajan’s Forum.

There are two frieze panels, where the first one depicts Trajan or Domitian on campaign riding a horse and charging barbarians. However, the depiction was re-worked to make it look more like Constantine. The second panel has an architecture drawing of Constantine crowned by Victory with two females representing honor and virtue. 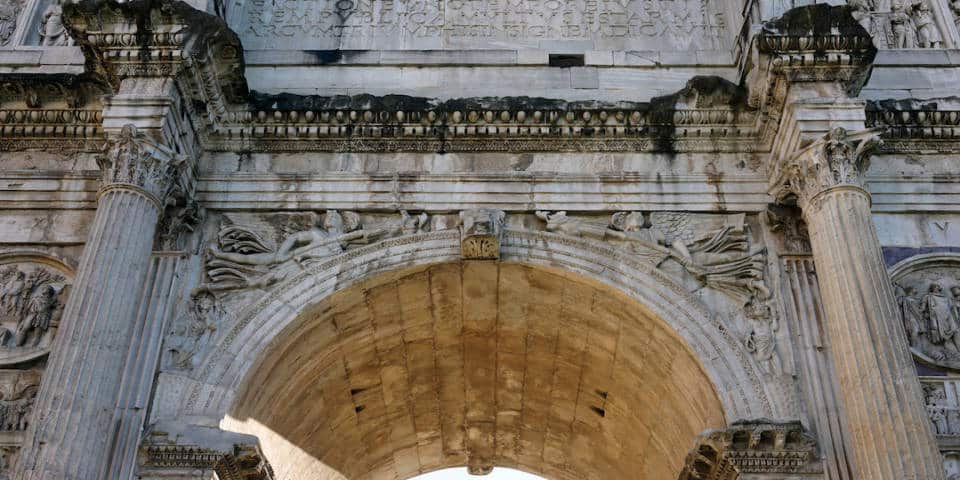 The eight Corinthian columns are from the Flavian monument of the 1st century, which was lost. So you can see the Dacian prisoners standing above each of them. 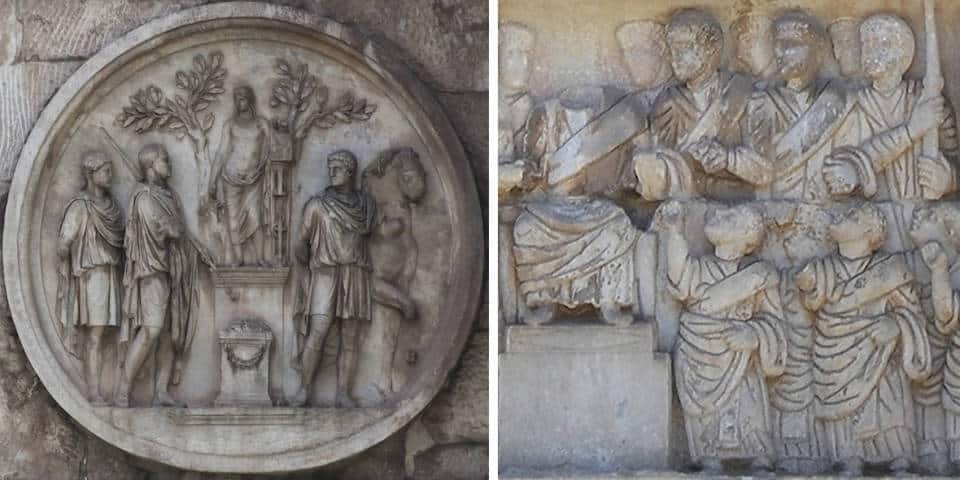 Moreover, the monument contains a sculpture depicting the Sun and Moon on each short side. Additionally, below these, you can see a frieze depicting the entry into Rome from the east side and departure from Milan from the west.

The Arch located next to the Colosseum

Overall, the Arch of Constantine is one of the best-preserved monuments from ancient Rome. It has a central location and serves as one of the most photographed sites nowadays.