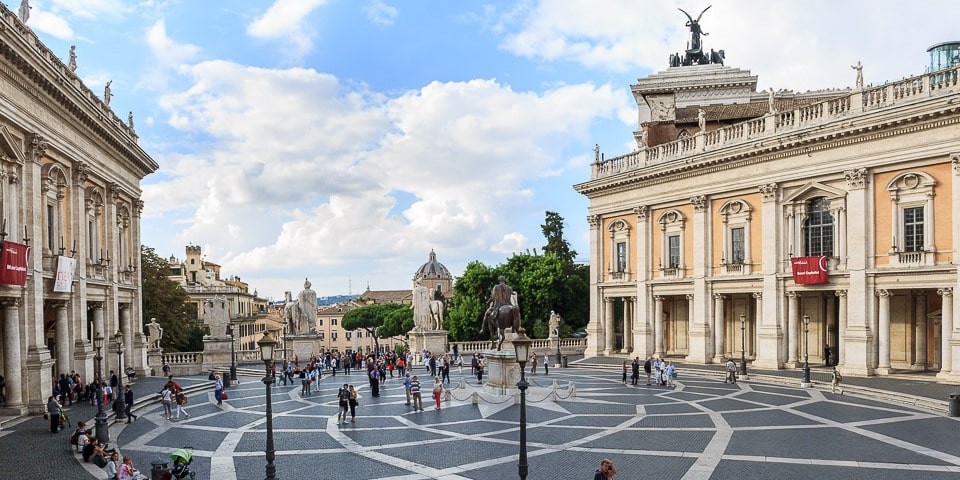 Capitoline hill (or Monte Capitolino) – one of the most popular and significant out of seven hills on which ancient Rome was built. This is the place where people used to worship ancient Gods, where the laws were passed, and wealthy noblemen built their luxurious villas and Renaissance masters made history.

Not everybody knows, but Capitoline hill was chosen by Romulus (first king of Rome) as a start point of a new city called Rome. In ancient Rome Capitoline became a place of Senate gatherings and place of official records office – Tabularium. Capitoline temple (also Capitoline Triad temple) was built in 5th BC century. The temple was dedicated to three main ancient Roman Gods: Jupiter, Juno and Minerva. The fall of Roman Empire in 1453 led to the destruction of these constructions to the point that citizens were using the area to herd the cattle.

Only in 1536 Capitoline hill with Piazza del Campidoglio crowning its top started to regain its current appearance with the expected arrival of Spanish king Charles V in 1538. Ashamed of the state of Capitoline hill, pope Paul III commissioned then and presently famous Renaissance architect and artists Michelangelo Buonarotti to bring Capitoline hill its past grandeur and consequently become a symbol of Rome. Although, Michelangelo was not able to finish the restoration project due to his death, his students continued his work and the construction was finally accomplished only in 1654.

The central place of the hill is proudly taken by the Piazza del Campidoglio. From the birds’ eye, we can see that the square has a shape of trapezoid. This way, Michelangelo made it visually open to the city and its citizens.

At the center of the square, we can see the Palace of Senators (Palazzo Senatorio) with the Palace of the Conservators (Palazzo dei Conservatori) and Palazzo Nuovo at its sides. The complex of the Capitoline Museums is full of hidden symbols that to these days puzzle scientists and art historians. Who knows maybe you will become the one to decipher Michelangelo’s secret messages?

As it was said before, visiting Capitoline hill is considered to be of top priority when visiting Rome. Three palaces mentioned earlier comprise famous Capitoline museums complex. Moreover, tourists can also see Basilica of St. Mary of the Altar of Heaven (Santa Maria in Ara Coeli).

Palace of Senators (Palazzo Senatorio) was built in 13th-14th centuries. Today, the Palace houses the Roman city hall and touristic visits are prohibited. However, tourists still can visit Gallerea Lapidaria, which hosts the most important works of Capitoline’s epigraphic collection. The Ancient underground corridors of Tabularium will help you jump back in time and see life and politics of Ancient Rome.

Palace of the Conservators

Palace of the Conservators (Palazzo dei Conservatori) was built in 14th century and served as a meeting place for local magistrates – judges and senators (conservatori). Now the building of the palace hosts the museum of marble busts of Ancient Rome, frescoes and Pinacoteca that exhibits works of Caravaggio, Rubens and Velazquez.

As some could have guessed from its name, this palace is the most recently added to the complex of Piazza del Campidoglio. It was built in 17th century and is a copy of the Palace of the Conservators. Today, it hosts statues of Ancient Rome and Greece.

Basilica of St. Mary of the Altar of Heaven 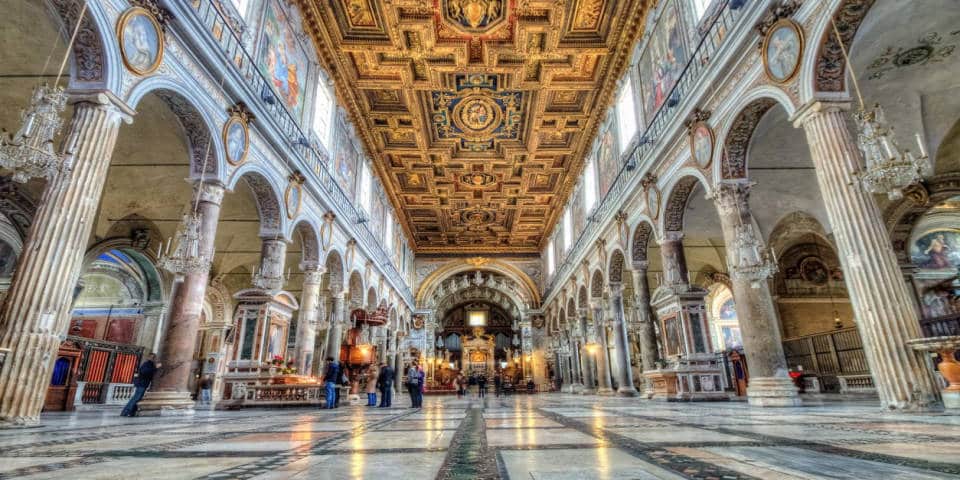 Finally, Basilica of St. Mary of the Altar of Heaven (Santa Maria in Ara Coeli) was built on the place of temple of Juno Moneta. Initially, it used to be a Greek monastery, then it belonged to Franciscan and Benedictine monastic orders, who completed and consecrated it in1921. The special attention should be given to wooden ceiling, the image of Madonna Aracoeli (Our Lady of the Golden Hands) and wooden statue of the the Santo Bambino of Aracoeli (“Holy Boy of Aracoeli or “Child Jesus of Aracoeli”) that believed to have some powers.