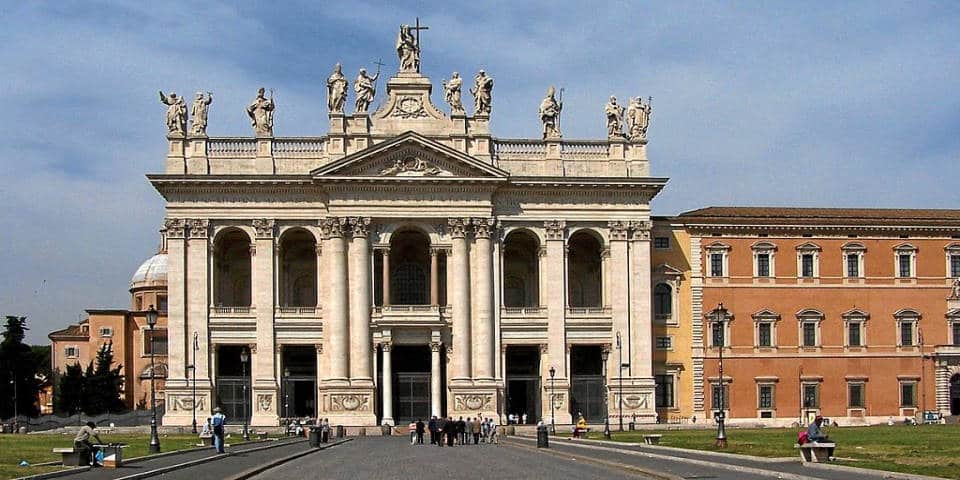 The Basilica of Saint John in Lateran (San Giovanni in Laterano) is defined as “the mother of all churches in the world.” It represents the mixture between the Pagan and Christian eras. You should visit the museum, which collects precious liturgical furnishings, sculptures, and ornaments of an ancient basilica. It was the first Christian basilica built in the city and the Pope’s main place of worship. Moreover, it was repeatedly damaged and restored, so San Giovanni in Laterano was continuously enriched over the centuries.

In pre-Christian times, the lands near the Celio hill belonged to a rich Roman family of Lateran. A mention of how in the 1st century, A.D. Plauzio Laterano was exposed in intrigues against Emperor Nero is left in the “Annals” of Tacitus. However, his plan didn’t work, and all the property of Laterano went to the imperial treasury.

The founder of the basilica is the Roman emperor Flavius Valerio Constantine (Flavio Valerio Costantino). Before the decisive battle with Maxentius, Constantine the Great saw in the sky Christma – a monogram of the name of Christ, which foreshadowed his victory. Thus, at the beginning of the third century, the Emperor recognized the freedom of religion, which led to the creation of the first Christian Church in Rome.

The richly decorated St. John the Baptist Cathedral was repeatedly looted and later restored. In the second half of the 5th century, Pope Illarion attached a room for baptism to the basilica. Moreover, three chapels were created and named after John the Baptist, John the Divine, and the Holy Cross. In the 9th century, Pope Leo III reconstructed the temple’s ceiling and decorated its apse with stained glass windows. Finally, in the 10th century, a chapel dedicated to St. Thomas was added to the basilica.

During the XIV century, Rome lost its privilege to be considered the center of Christianity because the pontificate moved to French Avignon

In the same century, the cathedral was fired twice. Also, upon the return of the papal authority to Rome, the Vatican was elected the new residence. The old building of the temple was almost destroyed, and Pope Martin V. started its restoration in the 15th century. In the following decade, most Romanesque columns were demolished during the construction work to give way to the early Baroque style. In the 16th century, the dome of the baptistery acquired an octagonal form, which we can see nowadays. 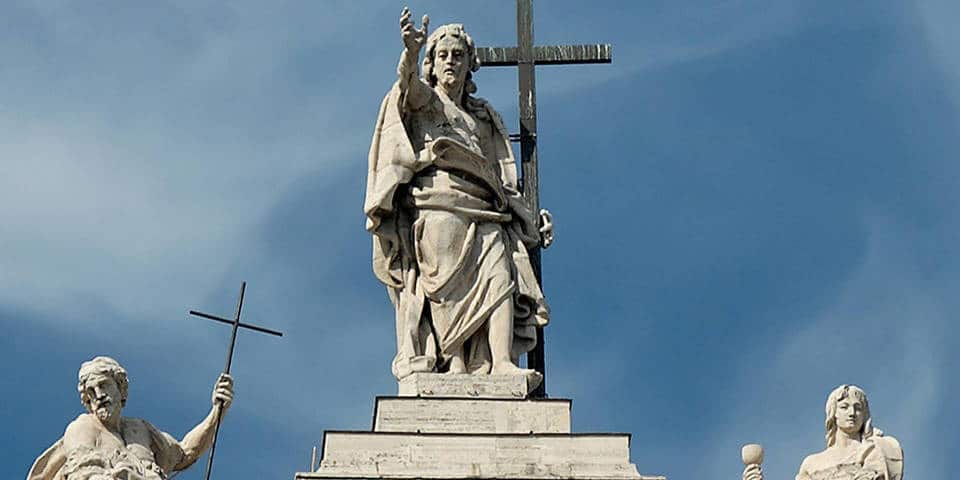 The Cathedral of St. John the Baptist has undergone many changes during its existence. The exterior of the building shows inclusions of Romanesque style, classicism, and baroque. The basilica was restored repeatedly, most notably by Borromini in the 17th century and Alessandro Galilei in 1735, when he added a substantial white façade.

Additionally, the engineer and architect Domenico Fontana decorated the church’s facade with sculptures of the apostles. Then, Francesco Borromini rebuilt the nave and passages of the basilica in the baroque style. Moreover, magnificent bronze doors were taken from the Roman Forum, and they still serve as the main entrance to the temple. 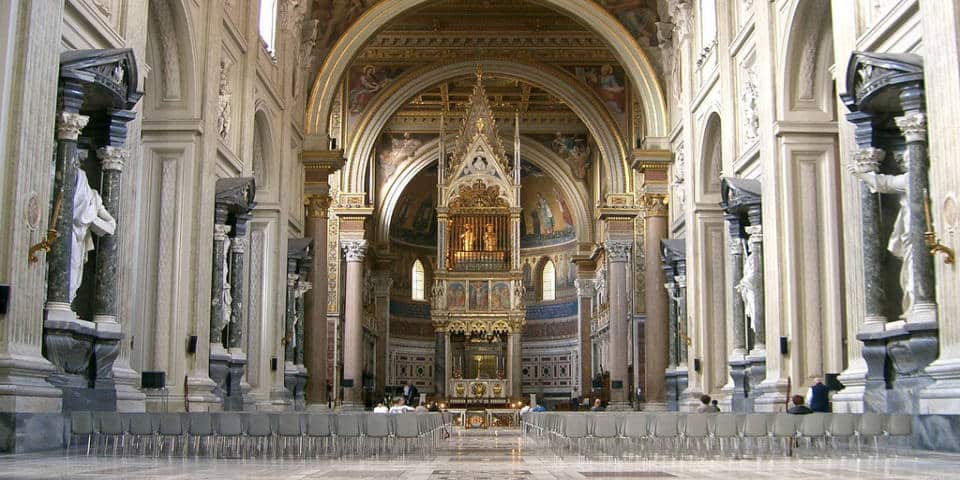 The temple went through several restorations in the 19th and 20th centuries to preserve its historical appearance. By the 2000th anniversary of the basilica, the Holy Doors, created by Floriano Bodini, were opened.

See also a Guide to Borromini’s Masterpieces in Rome.

The Basilica of Saint John in Lateran fascinates me because of the beauty of its interior. The most valuable mosaics from the times of Emperor Constantine were preserved in the temple’s apse. Moreover, early Christian martyrs with scrolls in their hands and the face of Jesus towering over them are executed in a Byzantine manner. In the 13th century, the mosaics were restored by Giacomo Torriti. The master added the Order of the Franciscans symbols to the ancient drawings.

Precious porphyry columns and bright Byzantine mosaics serve as solemn decorations for the preaching of the pontiffs. The central altar of the temple contains ancient Christian relics – the heads of the apostles Peter and Paul.

The nave of the temple impresses with its rich decoration. Mosaic floors are dotted with contrasting circles and squares, characteristic of the Cosmatheco style. Columns of the nave are lined with Numidian marble. Also, white plates are decorated with decorative carvings and emblems of the pontiffs. In the nave of San Giovanni in Laterano, you can see a partially preserved fresco depicting Pope Boniface III. The author of this skillful work is Giotto di Bondone. 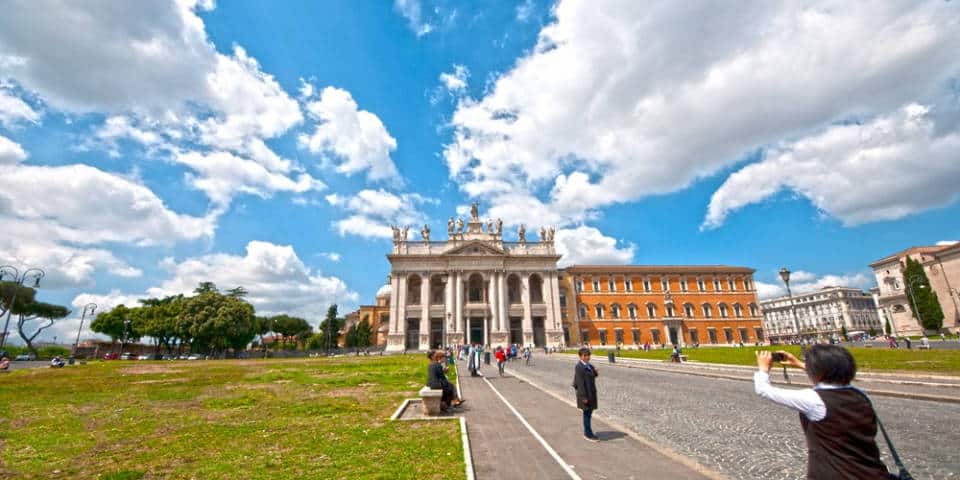 Capella di S. Maria Assunta appeared in the 18th century to accommodate the tomb of Cardinal Giulio Aquavia, who died in the 16th century. Another chapel is dedicated to the martyr San Giovanni Nepomuceno and was created in the 19th century.

The architect Giacomo della Porta designed the Massimo Chapel in the 16th century. The main relic of the chapel is the painting “The Crucifixion of Jesus Christ.” In addition, there is a chapel consecrated in honor of John the Theologian. Moreover, there is the tomb of the Portuguese Cardinal Antonio Martinez de Chavez, who died in the 15th century.

There is a museum in the temple where you can see the sacred relics of the 11th-19th centuries. The most valuable exhibits of the museum are the casket with the cloak of John the Theologian, the precious cross of the 13th century, the relics of the Great Martyr Catherine, and many other masterpieces. Pope John Paul II created the museum in 1984. The door to the exhibition is behind the statue of Innocent III.

The cathedral is located on Piazza di San Giovanni in Laterano.