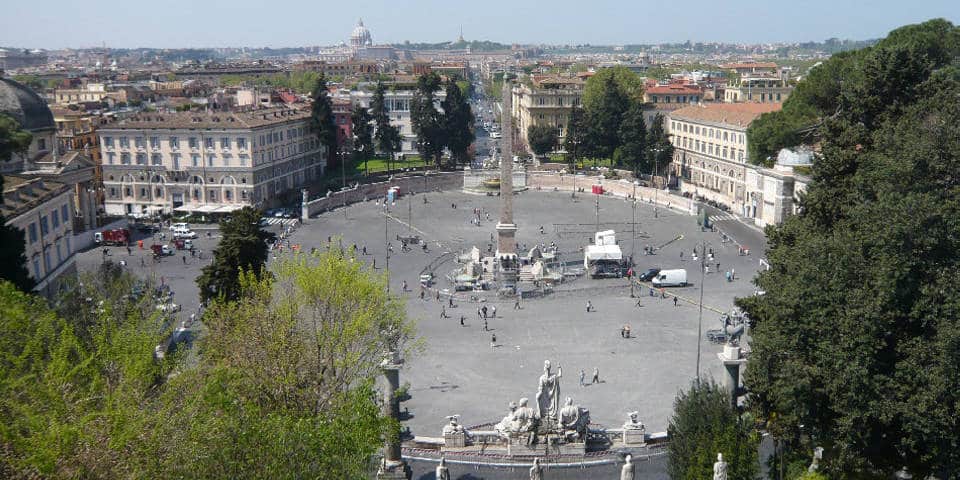 Piazza del Popolo is located between the Pincio district and the banks of the Tiber River. There are churches, fountains, monuments, and ancient and modern marble memoirs on the square. It was rebuilt by a Valadier architect in 1834, who designed two half-laps to the Obelisk.

Piazza del Popolo is the site where foreigners arrived in the city during the era of the Empire. The church of Santa Maria del Popolo is on the left side of the square, which was rebuilt by Baccio Pontelli and Andrea Bregno between 1472 and 1477. The church hosts paintings and sculptures by Caravaggio, Pinturicchio, Carracci, Raffaello, Bernini, and Bramante. 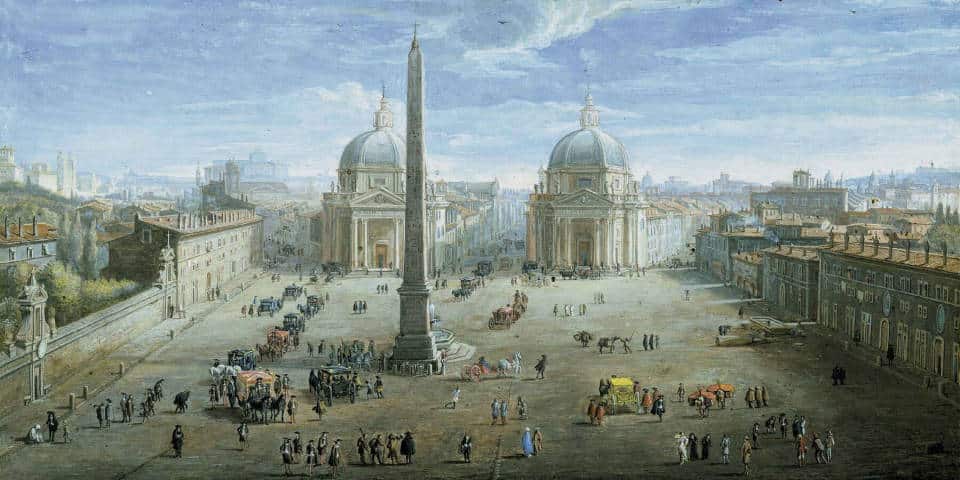 The square is named after the poplar tree

Rome’s Northern entrance served as a vestibule into the city through the gate in the Aurelian Walls. It was known as Porta del Popolo, but the name was changed several times. Initially, it was called Porta Flaminia, and Emperor Aurelianus commissioned the construction. Then, during the Early Medieval period, the name was changed to Porta San Valentino because of the nearby catacomb. Finally, Porta del Popolo was the official name because the church adjoining the gate is Santa Maria del Popolo.

Also, in the Middle Ages, the square was named Piazza del Trullo, after the fountain with statues in its center. This fountain was moved to Piazza Nicosia to make four fountains with Egyptian lions. It was under the supervision of Domenico Fontana.

In 1655, the Swedish Queen Christina arrived in Rome through Porta del Popolo. Bernini had been commissioned to remake the inner façade of the gate before her arrival. A plaque appeared above the arch with the sign “FELICI FAUSTOQUE INGRESSUI MDCLV” (For a Happy and Propitious Entrance), which you can see nowadays. Moreover, the Queen decided to spend all her life in Rome after her visit. 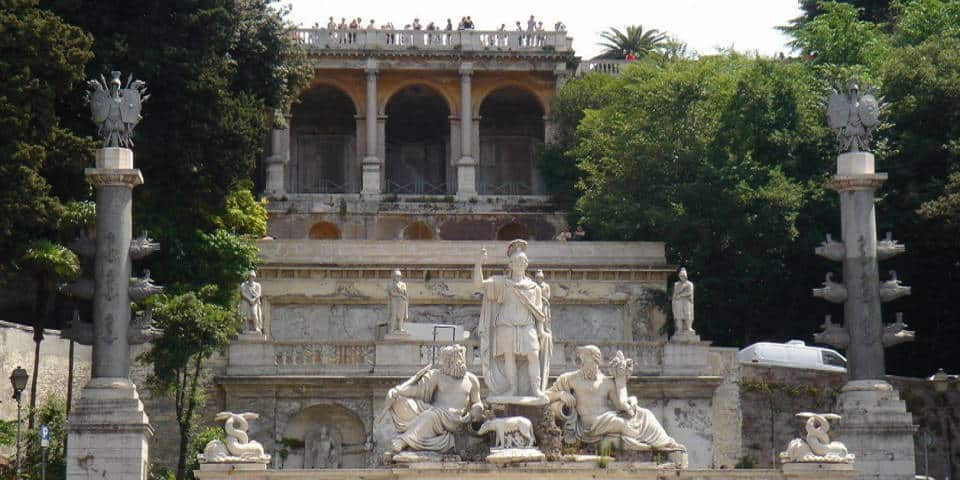 By the end of the 1700s, during the Napoleonic invasion, there was an increase in visitors and pilgrims who came to Rome through Porta del Popolo. For this reason, the square was modernized. Moreover, during the Napoleonic epoch, Touron was head of the “Commission of Embellishments” in the Eternal City. Valadier was under his commission to redesign the square. Works began in 1816 and ended in 1824. Three buildings remained untouched: Santa Maria del Popolo, Santa Maria di Montesanto, and Santa Maria dei Miracoli.

The fountain of Neptune between statues of the two tritons and the Goddess Rome was added in 1823, at the time of the reign of Pope Leo XII. Piazza del Popolo became accessible from each side. Moreover, the square became accessible to the park on the above hill, now known as Villa Borghese. Today, the three churches on the square are dedicated to the Virgin and surround the Obelisk dedicated to the pagan Sun god.

At the square’s southern end, you can find two famous symmetrical churches: the Santa Maria dei Miracoli and the Santa Maria in Montesanto. Pope Alexander VII commissioned them in 1658, and Carlo Rainaldi designed both. 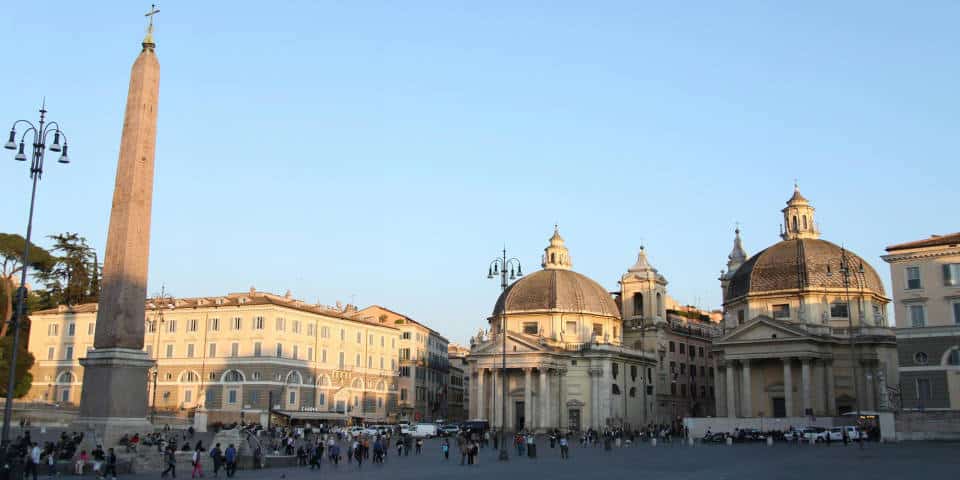 It is important to note that the third church, the Santa Maria del Popolo, was built in 1477 on the site of an 11th-century chapel. There are many remarkable artworks as Rome’s oldest stained-glass windows and paintings of Caravaggio. Also, the Chigi and the Della Rovere chapels created by Raphael were covered with 15th-century frescoes.

What to See on Piazza del Popolo? 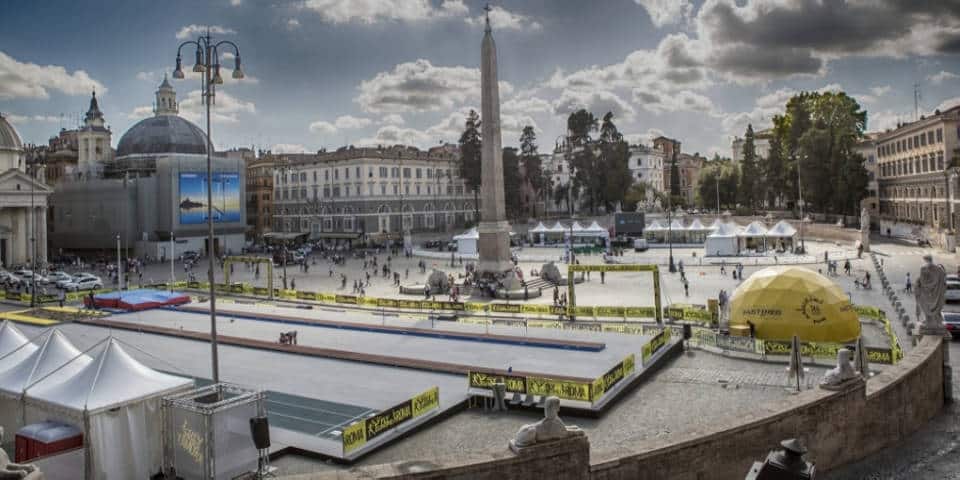 How to Get There

There are many excellent hotels near Piazza del Popolo. This area is convenient for staying if you are interested in shopping and the most famous sites of Rome.

Read also about the best hotels near Piazza del Popolo.

Since this is a tourist area, you should be careful in choosing a restaurant. There are several options to visit:

Piazza del Popolo is one of the must-see sites in Rome. It has an impressive architecture with remarkable fountains, statues, churches, and an obelisk in the center of the square. Moreover, you can quickly discover the most important Roman sites within a footwalk with its great location.