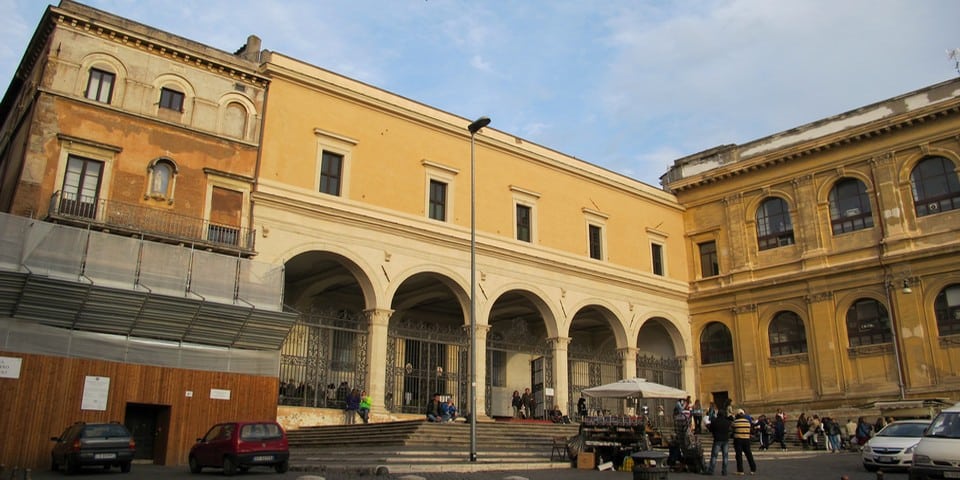 San Pietro in Vincoli (Saint Peter in Chains) is a Roman Catholic titular church and minor basilica, famous for being the home of Michelangelo’s statue of Moses, part of the tomb of Pope Julius II.

The Titulus S. Pietri ad vincula was given on 20 November 2010, to Donald Wuerl. The previous Cardinal Priest of the basilica was Pio Laghi, who died on 11 January 2009

Frequently Asked Questions
Why was St Peter in Chains?
The Apostle Peter was jailed in Jerusalem around the year 42 on the orders of Herod Agrippa, shackled in an iron chain for preaching about Jesus.
The night before his trial, St. Peter was said to have been released from the chain by an angel and led out of prison. Initially, the chains were kept in Jerusalem until Patriarch Juvenaly donated them in 439 to Empress Eudoxia, who transported them to Constantinople. She sent one of the chains to Rome as a gift to her daughter Eudoxia (according to another version, as a gift to Pope Leo I).

Do I need a ticket to visit the Church of St Peter in Chains?
Entrance to the Church of St Peter in Chains is free of charge for all tourists, regardless of their religion.
Did Michelangelo hit the statue of Moses?
Yes, it is indeed true. Once finished the statue, it seemed so real and alive that Michelangelo violently hit the knee of the statue with a hammer, shouting, "Why don't you speak to me?".

Initially, the church was named the Basilica Eudoxiana. However, it was first rebuilt on older foundations in 432-440 to house the relic of chains that bound Saint Peter when he was imprisoned in Jerusalem, the episode called “Liberation of Saint Peter.” The Empress Eudoxia, the wife of Emperor Valentinian III, received them as a gift from her mother, Aelia Eudocia. In contrast, Aelia had received these chains as a gift from the juvenile bishop of Jerusalem.

Who made the Church of Saint Peter in Chains?
This basilica was consecrated in 439 by Sixtus III. Several restorations, including the one by Pope Adrian I, and further work in the 11th century. From 1471 to 1503, when Pope Julius II was elected, Cardinal Della Rovere, the nephew of Pope Sixtus IV, made a significant restoration. The front portico, attributed to Baccio Pontelli, was added in 1475. The cloister (1493-1503) has been attributed to Giuliano da Sangallo. Later, in the 18th century, Francesco Fontana was working on the restoration process of the church. The last renovation was in 1875.

Discover more about San Pietro in Vincoli during a private guided tour over Christian Rome, “the City of Popes.”

The Chains of St. Peter 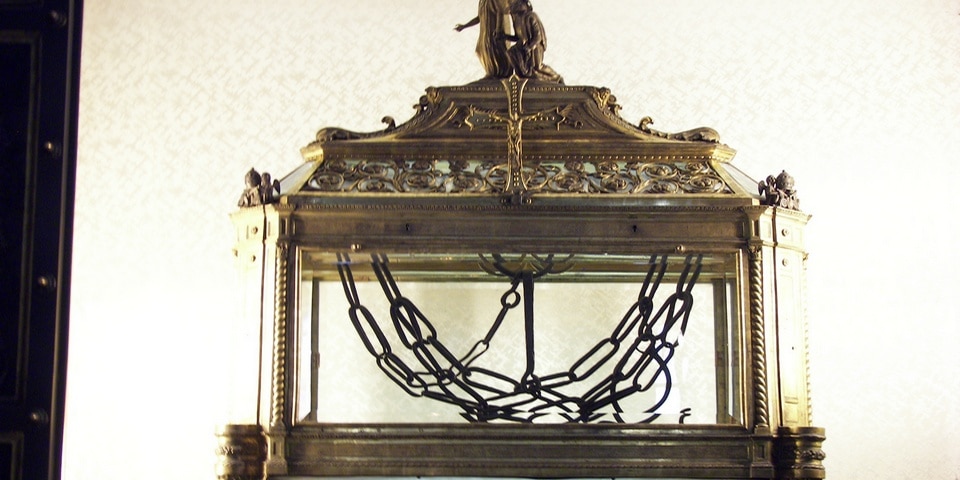 According to legend, when Leo compared the two chains, they miraculously fused together. The chains are now kept in a reliquary under the main altar in the basilica 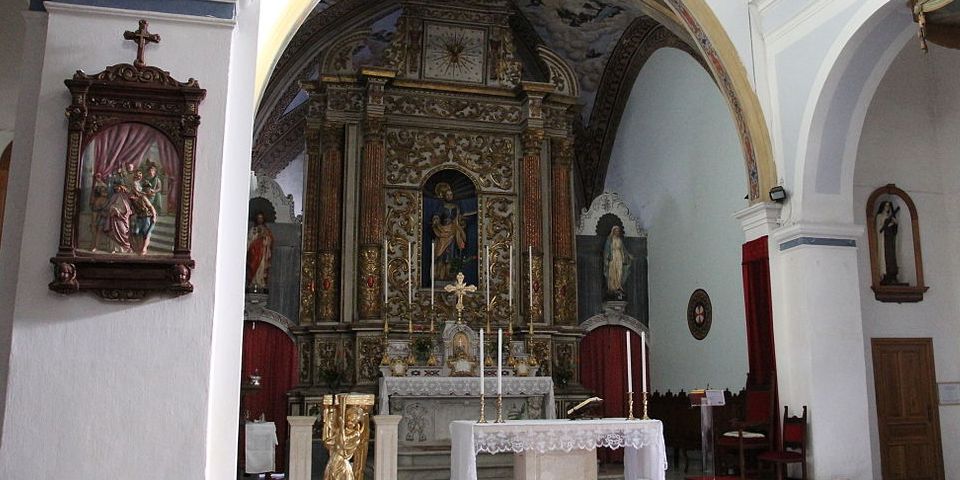 The interior has a nave and two aisles, with three apses divided by antique Doric columns. The aisles are surmounted by cross-vaults and the 18th-century ceiling, frescoed in the center by Giovanni Battista Parodi, portraying the Miracle of the Chains (1706). 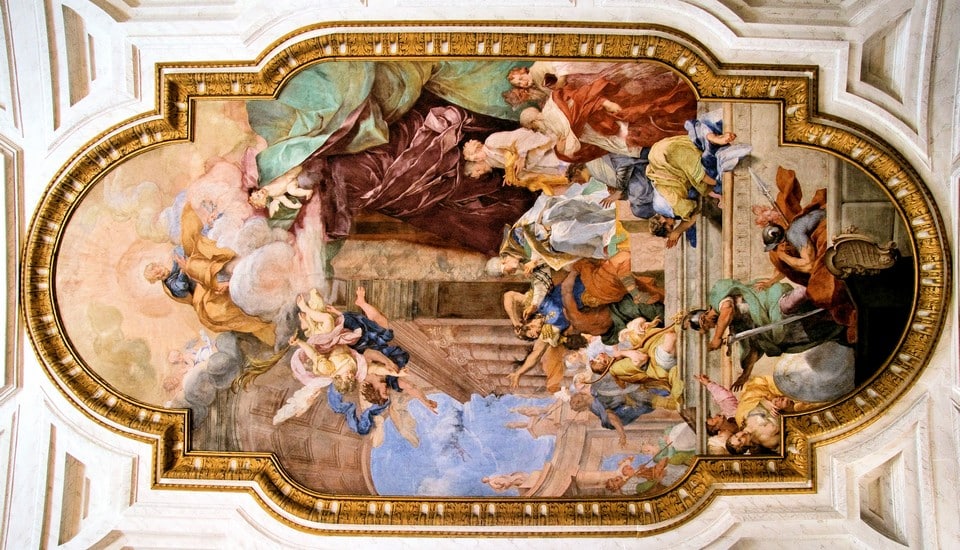 Other artworks inside the basilica include two canvases of Saint Augustine and St. Margaret by Guercino, the monument of Cardinal Girolamo Aguchi designed by Domenichino, who is also the painter of a sacristy fresco representing the Liberation of St. Peter (1604.) The altarpiece on the first chapel to the left is a Deposition by Cristoforo Roncalli. The tomb of Cardinal Nicholas of Kues (1464), Cardinal Nicholas before St Peter, is by Andrea Bregno.

Moreover, painter and sculptor Antonio Pollaiuolo is buried at the left side of the entrance. The tomb of Cardinal Cinzio Passeri Aldobrandini, decorated with an allegorical skeletal representation of Death, is also located in the church. 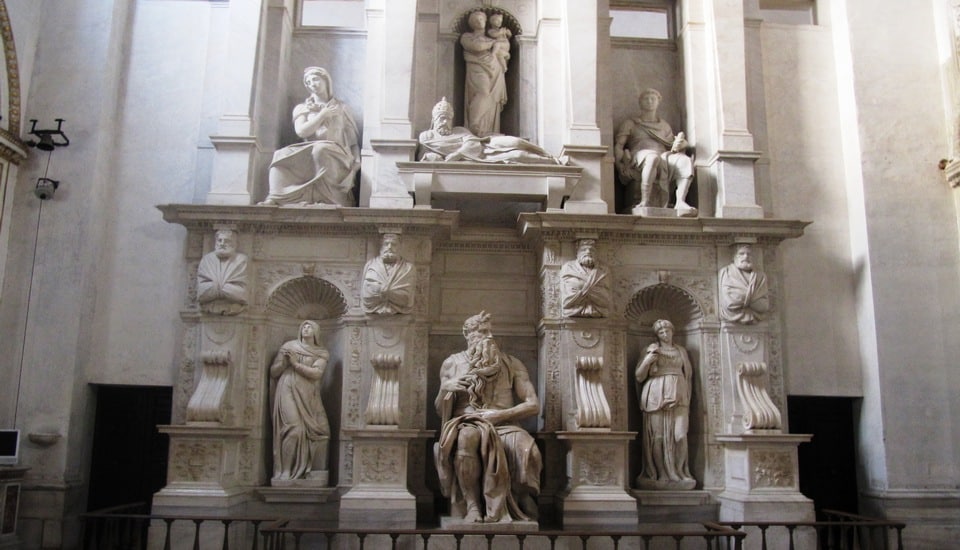 The monumental Tomb of Pope Julius II was never intended to be inside the basilica but in the new St Peter’s Basilica. The present wall monument was a massively downgraded version of an original freestanding tomb project, when mooted in 1505, it would have had about 40 statues by Michelangelo.

On the pope’s tomb, there are 7 full-figure statues and 4 bearded hero-caryatids.

The basilica is mainly famous because of the tomb of Giuliano della Rovere, who in 1503 became pope Julius II. In 1505 he asked Michelangelo to come to Rome to work on his tomb. Michelangelo designed a huge monument and went to Florence to select the best blocks of Carrara marble to start sculpting. However, in 1508, the pope decided he wanted Michelangelo to start working on the Sistine Chapel. Shortly after the ceiling of the Sistine Chapel was finished, Julius II died, and his successors commissioned Michelangelo with other tasks. By the time Michelangelo died in 1564, only the statues of Moses, Leah, Rachel, and two dying slaves were completed.

Nowadays, no one knows exactly what the monument was initially supposed to look like. First, there is the statue of Moses that prominently takes a central position. He is flanked by Leah and Rachel, both created in the latter years of Michelangelo’s life. Michelangelo’s students designed the statues above Moses.

Even Michelangelo considered the statue one of his best works and the story says that he found it so lifelike that he started talking to Moses. When the statue didn’t answer Michelangelo became angry and he threw a chisel at the knee of Moses. Nowadays you can see the cut on the statue’s right knee 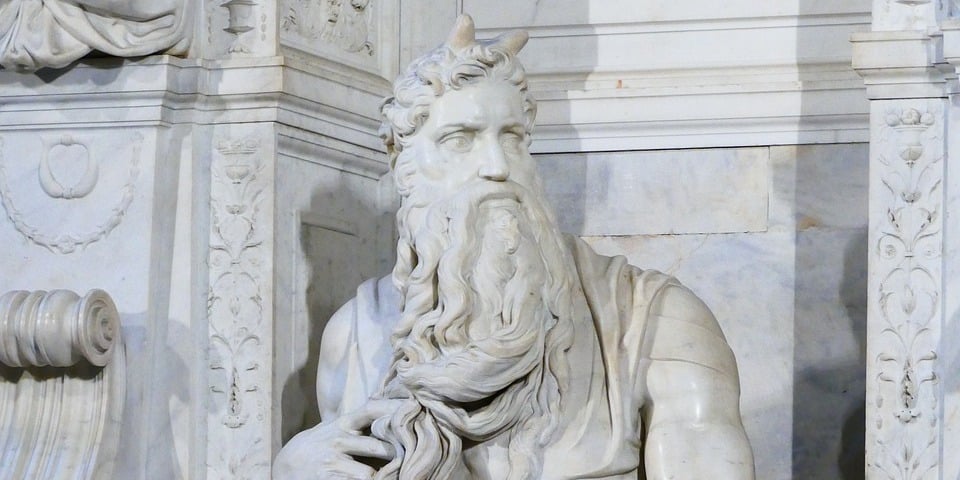 The church is located on Oppian Hill near Cavour metro station, a short distance from the Colosseum.

However, for visitors to the artworks, the times are: