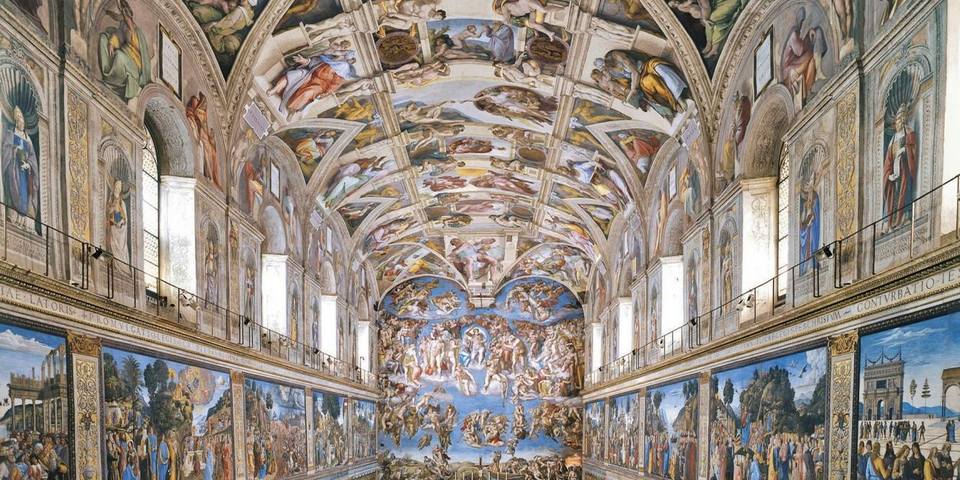 The Sistine Chapel (Cappella Sistina) is one of the chapels of the Apostolic Palace and one of the most important gems of the Vatican City State, Rome, and the world. It is famous for its architecture with many detailed frescoes. Moreover, it is the temple in which popes are chosen and crowned.

The election of a new pope has been held in the chapel since 1492, along with other locations. Consequently, it became the sole venue of elections in 1870. Some frescoes cover the walls and the ceiling. Some of the notable artists who worked on the chapel are Perugino, Michelangelo Luca, and Botticelli. The location of the Sistine Chapel is inside the Vatican Museums.

By its original definition, it was the chapel of the Vatican fort, known as Cappella Magna. The name of it comes from Pope Sixtus IV della Rovere (pontiff from 1471 to 1484), who commissioned its restoration between 1477 and 1480. All this time, the chapel has served to celebrate papal acts and ceremonies of the Catholic Church. The 15th-century decoration of walls consists of the false drapes, the Stories of Moses and Christ, and the portraits of the Popes. The panels of the chapel also contain depicted events from the Old and New Testaments of the Bible.

However, the Sistine Chapel is quite plain outside for such an important building: there is a block-like rectangular brick building without any adornment. Moreover, there is no impressive façade and no processional entrance door. All entry points of the chapel are internal, and you can visit it only from other parts of the Papal Palace. 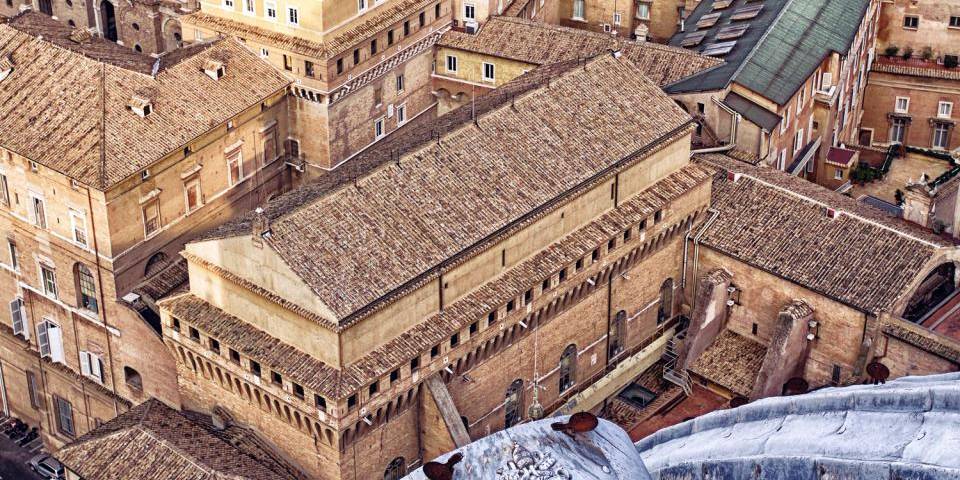 Importantly, all electronic devices are prohibited for use inside the chapel during the election, and all 115 cardinals who participate in the latest election are swept for bugs before they enter the chapel. Talking about visitors and taking photos inside the Sistine Chapel is also prohibited.

Immediately after the cardinals have entered, the doors of the chapel are closed with words “Extra omnes”, which means “Everyone out”

The chapel has existed since 1368. The present version of it was designed by Pontelli and built under the guidance of Giovannino de’ Dolci.

The Sistine Chapel was restored by Sixtus IV, who commissioned its restoration in 1477. During the pontificate of the Pope, a group of most famous Renaissance painters was called to work on the decoration of the chapel.

At that time, two series of fresco panels were created, one on the life of Moses to the left of the altar and another on the life of Jesus Christ, located on the right side. Moreover, these panels were created together with portraits of the popes who had governed the Church until then. The paintings were finished in 1482. On the festivity of the Assumption, Pope Sixtus IV celebrated the first mass in the chapel, blessing the Virgin Mary. 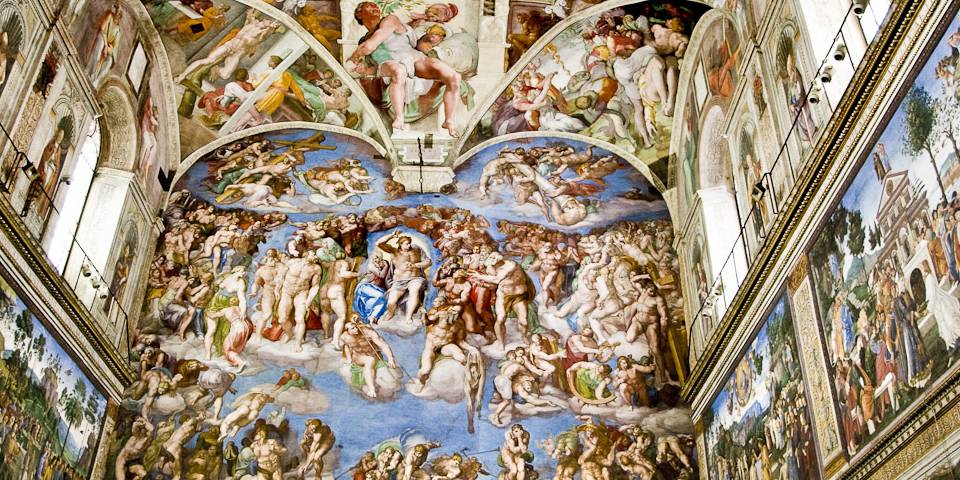 On August 15, 1483, Sixtus IV consecrated the first mass in the Sistine Chapel

Consequently, the place became a rostrum for religious and official papal activities. Most people know it as the venue of the Papal conclave. Two mostly known works of the chapel are the Final Judgement, which represents the Apocalypse of St. John, and the Creation of Adam, which represents the story from Genesis in which God gives life to Adam by Michelangelo. Interestingly, Raphael was a rival of Michelangelo, who accused Raphael of plagiarism, complaining that everything that Raphael knew about art, he had from Michelangelo. While Michelangelo worked on the ceiling of the Sistine Chapel, the young Raphael visited Rome and became attracted to his work in the papal apartments, which showed the influence of Michelangelo. Before starting works on the chapel, Michelangelo had created a marble masterpiece of a standing male nude, David (Davide), between 1501 and 1504 in Florence.

The frescoes of the entrance wall were repainted in the mid of 16th century by Hendrik van den Broeck, who worked on the Resurrection of Christ by Ghirlandaio, and Matteo da Lecce, who repainted the Discussion over the body of Moses by Signorelli. Unfortunately, the masterpiece was damaged during the collapse of the door in 1522. Moreover, there was a complete restoration of the Sistine Chapel’s frescoes between 1979 and 1999. Several interventions were added: the marble parts (cantoria), the screen, and the coat of arms of Pope Sixtus IV.

One of the famous paintings is the “Baptism of Christ,” which was performed in 1482 by the Italian painter of the Renaissance, Pietro Perugino. The size of the fresco is 540 cm x 335 cm. The fresco shows Christ, John the Baptist, Pigeon as a symbol of the Holy Spirit, God in the luminous cloud, cherubs and seraphim, two angels, a crowd of people, the Jordan River, the landscape of Rome, the triumphal arch, the Colosseum, and the Roman Pantheon. 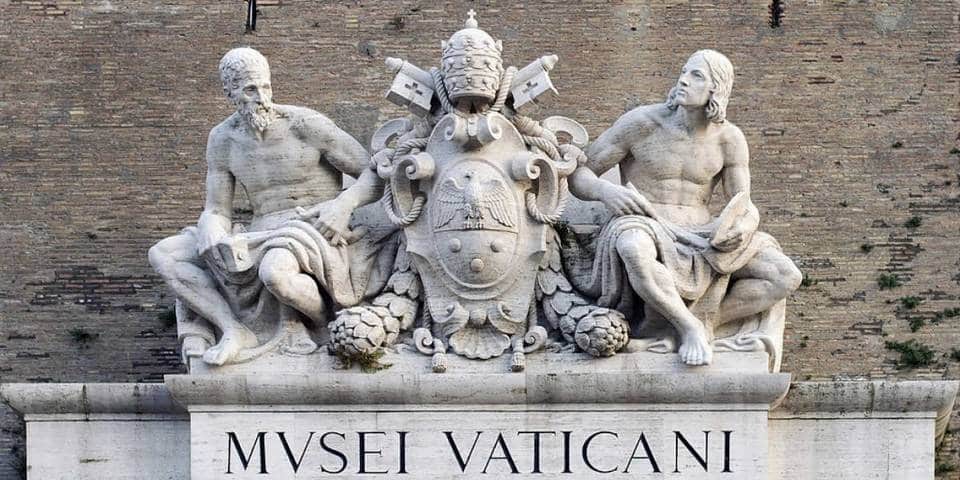 The best way to see the Sistine Chapel is by ordering an individual tour of the Vatican Museums. Unfortunately, the chapel cannot be visited on its own and can be entered through the museum complex. 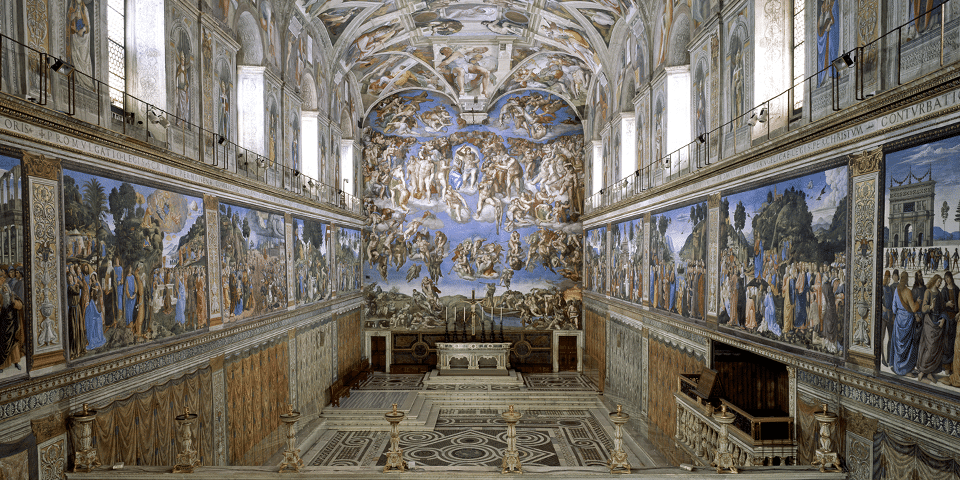 Commissioned by Pope Julius II, Michelangelo worked on the vault of the chapel. The artist painted all the frescoes from the ceiling of the Sistine Chapel. It took four years to paint the frescoes and complete the work, from 1508 to 1512.

The work made by Michelangelo changed the course of Western art

Before working on the chapel, Michelangelo was famous thanks to his work as a sculptor. Pieta and David’s masterpieces led him to fame, but his works with a brush were underestimated. According to Vasari, Julius gave work on frescoes to Michelangelo because of the instigation of two artistic rivals of his, Bramante and Raphael.

The first painting on which Michelangelo worked was the Noah fresco (entrance side of the chapel), but he removed the scaffolding when he completed the scene. The artist realized that the figures were too small to serve their purpose on the ceiling and adopted larger figures in the following scenes. Thus, one can notice that the size of the paintings becomes bigger, moving toward the altar side of the chapel. Moreover, Michelangelo painted a fictive architectural molding and supporting statues down the extent of the chapel for framing the central Old Testament scenes in grisaille (means greyish coloring) to give them the presence of real fixtures.

To reach the chapel’s ceiling, Michelangelo created special scaffolding. Instead of creating the structure from the floor up, he made a wooden platform held up by brackets implanted into holes in the wall. When he finished the painting in stages, the scaffolding was designed to move across the chapel. After the installation, Michelangelo began the painting process. He used a fresco technique, which means he applied washes of paint to wet plaster. To create an illusion of depth, Michelangelo scarped off some of the wet mediums before painting. 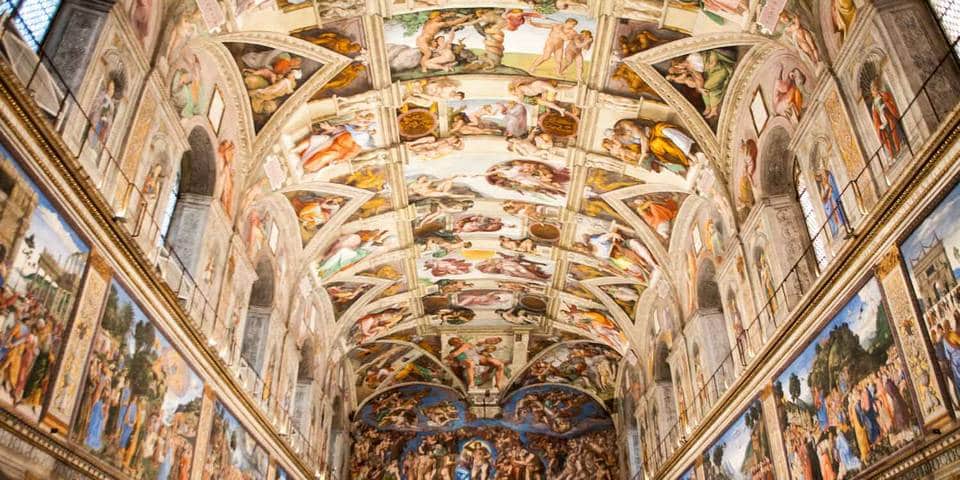 Since plaster dries quickly, Michelangelo worked in section, adding planes of fresh plaster each day. Now these sections are called giornata and are still perceptible nowadays

The theme of the ceiling of the Sistine Chapel comes from the Old Testament of the Bible, precisely the Book of Genesis. Consequently, most of the frescoes embody the human connection with God. Each section on the ceiling shows various scenes from the biblical stories.

The creation of Adam

The Creation of Adam is considered the best-known picture in the Sistine Chapel. You can find it in the central part of the vault. The story from Genesis in which God gives life to Adam is explained in this masterpiece. 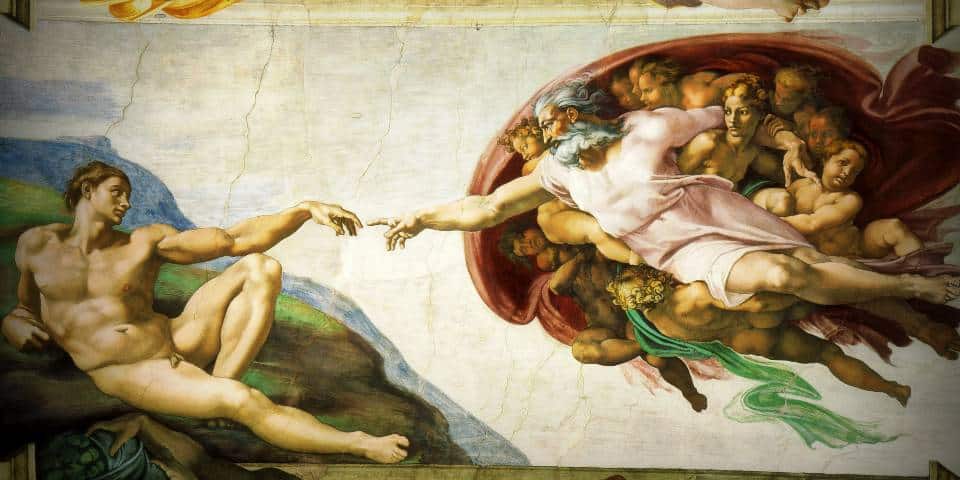 This painting exists in thousands of imitations and parodies and is the most replicated religious masterpiece ever. God is depicted with a white beard in a cloak, while Adam is completely nude. The arm of God is outspread to convey the spark of life from his own finger to Adam’s one. Adam’s left arm is mirroring God’s to show that man exists as the likeness of God. Moreover, there are many hypotheses regarding the meaning of the twelve figures around God. The painting shows the person protected by God’s left arm, which according to hypotheses, might be Eve, the Virgin Mary, Sophia – the goddess of wisdom, or an angel of the feminine build.

Between 1536 and 1541, the iconic Final Judgement mural on the wall of the altar was painted for the popes Clement VII and Paul III. The Final Judgement represents the Apocalypse of St. John. You can find there righteousness in the company of Christ and saints and the sinners who achieve their punishment. In addition, the dimensions of the altar are 13.7 by 12.2 meters. 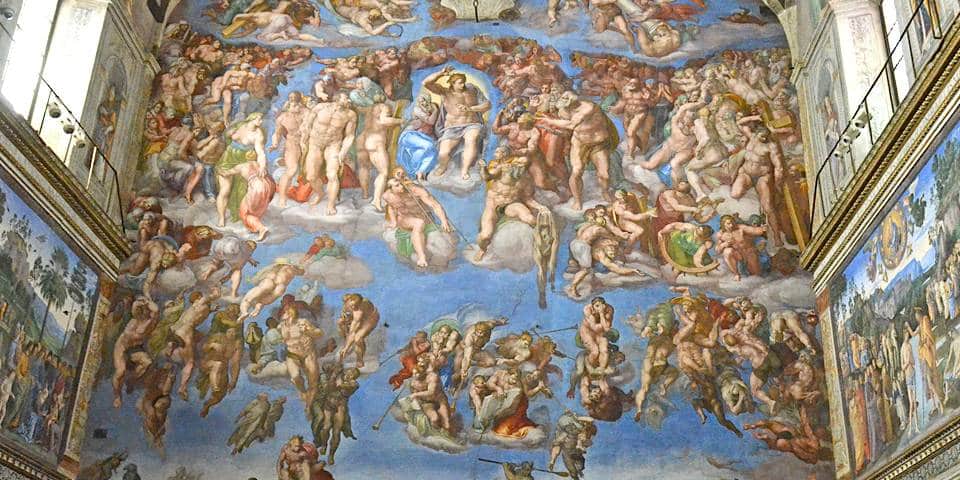 Michelangelo began to work on the mural thirty years after the ceiling of the Sistine Chapel was full. The Last Judgment fresco covers the whole ceiling. There were many controversies because the figures in the painting were naked. Cardinal Carafa claimed that Michelangelo was obscene, and a censorship campaign by Carafa and Monsignor Sermini began to remove the fresco. Consequently, the masterpiece of Michelangelo remained until Daniele da Volterra enclosed the genitalia in the figures.

Interestingly, Michelangelo added his portrait in the painting, where he is represented as St. Bartholomew after his skinning

Michelangelo’s Creation of Man panel of the ceiling from 1512 contains an image that has been misunderstood for 487 years. First, the image of the brain represents God bestowing intellect on man. Many scholars have interpreted the masterpiece to mean God bestowed life on man. 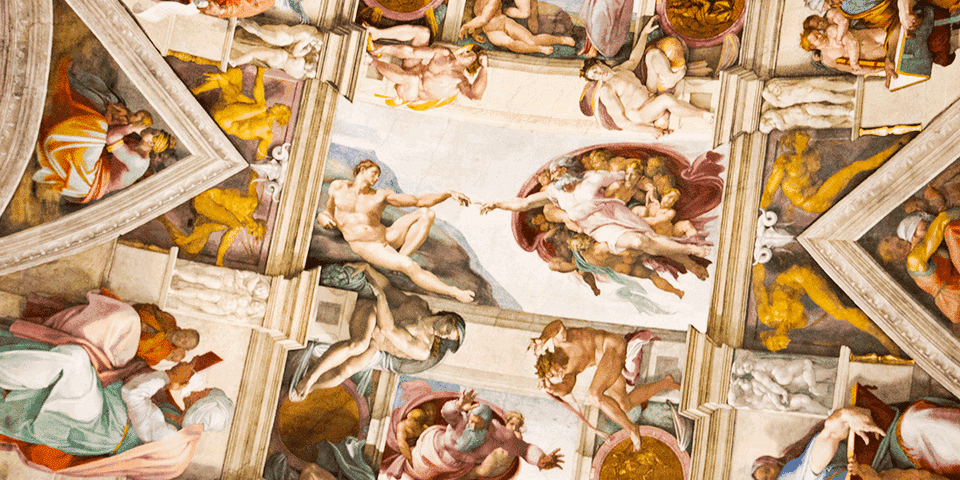 Before and after restoration

The frescoes of the Sistine Chapel had several interventions before the restoration process started in 1980. Primarily, the problems with the ceiling appeared because of the water penetrating through the floor above. In 1625, a restoration was made by Simone Lagi, the “resident gilder,” who covered the ceiling with linen clothes and cleaned it by rubbing it with bread. He stated that the frescoes “were returned to their previous beauty without receiving any harm.”

Another restoration took place between 1710 and 1713 by the painter Annibale Mazzuoli and his son. They used sponges dipped in Greek wine and repainted some areas’ colors, which were lost due to the efflorescence of salts. Moreover, Mazzuoli applies lots of glue varnish. This restoration was focused mainly on the ceiling, while less attention was paid to the lunettes.

After, between 1935-1939, the Restoration Laboratory of the Vatican Museum made a restoration to consolidate some areas of the intonaco at the eastern end of the chapel and to remove the dirt. 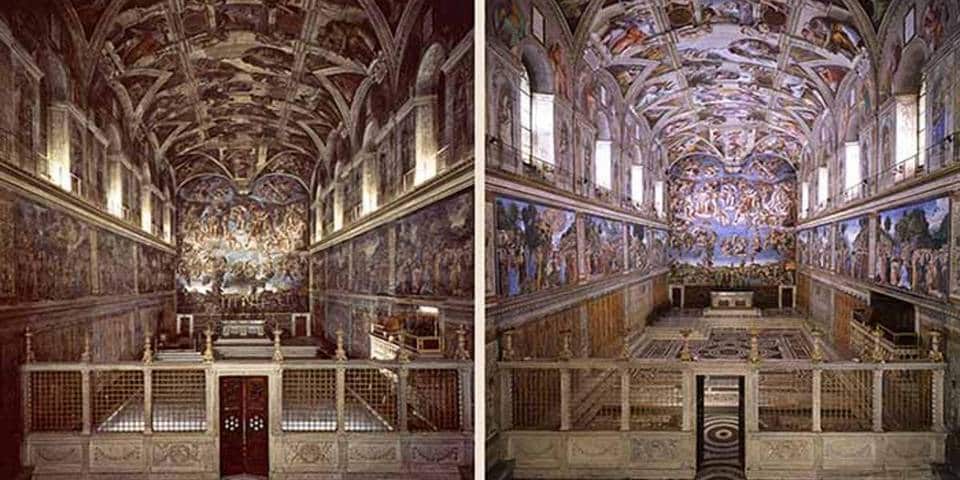 The experimentation for the modern restoration began in 1979. The team of restorers with Gianluigi Colalucci, Maurizio Rossi, Piergiorgio Bonetti, and others took as their guidelines the Rules for restoration of works of art by Carlo Pietrangeli, the director of the Vatican’s Laboratory for the Restoration of Pictures.

The most important point of the restoration procedure was a study and analysis of the artwork. Between 1980 and 1984, the first stage of restoration, the work on Michelangelo’s lunettes, was completed. The later focus was transferred to the ceiling, and works were finished in 1989. From there, the focus was transferred to the Last Judgement, and the restoration was unveiled by Pope John Paul II on 8 April 1994. The final stage of restoring the wall frescoes was approved in 1994 and unveiled in 1999.