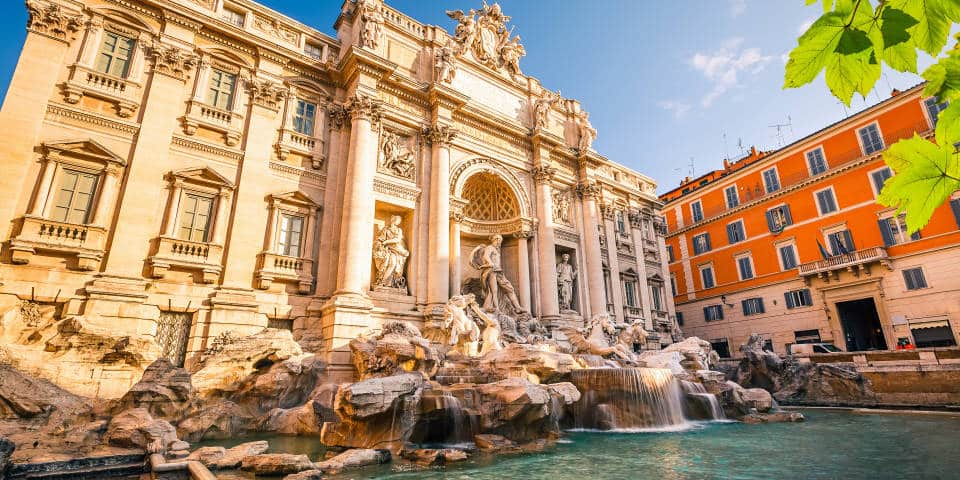 A genuine pearl among hundreds of different fountains in Rome is considered to be the Trevi Fountain (Italian: Fontana di Trevi). Majestic and spectacular sightseeing is more like a scene from an ancient play, made in stone, rather than a clean water source. The fountain’s perfect location and incredible beauty attract thousands of visitors to the Italian capital.

Of course, every wish needs its own coin. So, you will need two coins to find romance and to marry an Italian in Rome. If you have already found your love and want to return to Rome in the future, then just flip one coin. The coin’s denomination is not important, and it is not necessary to throw 2 euros. Believe me, 10 cents are enough.
What is written on the Trevi Fountain?
At the top of the fountain is written in Latin:
CLEMENS XII PONT. MAX.
AQUAM VIRGINEM
COPIA ET SALUBRITATE COMMENDATAM
CULTO MAGNIFICO ORNAVIT
ANNO DOMINI MDCCXXXV PONT VI.
Meaning in English: Clemens XII Pontifex Maximus decorated the Virgin Aqueduct and committed it with abundance and salubrity to the cult in the Year of the Lord 1735, the 6th year of his pontificate.
The other inscription behind the statues of Abundance, Health, and Ocean says in Latin:
POSITIS SIGNIS ET ANAGLIPHIS TABULIS IUSSU CLEMENTIS XIII PONT. MAX. OPUS CUM OMNI CULTU ABSOLUTUM A. D. MDCCLXII.
Meaning in English: The statues and the reliefs were decreed to be placed here by Clemens XIII Pontifex Maximus, and the work was solved from every further work and care in the Year of the Lord 1762.

Fountain Trevi was constructed in Rome in 18 century, but its background is so captivating that we cannot help but mention it. Emperor Octavian Augustus and his associate, Mark Vipsanii Agrippa, in the 20-es B.C., started an extensive reorganization in Rome. Among the numerous reforms, Mark Agrippa suggested providing the city with clean drinking water.

Later, tribune Agrippa put a lot of effort into the purification of the city canalization and construction of the water pipe system. A newly-constructed aqueduct got such a romantic name, Aqua Virgo. Every time its waters came the way of 12 km to fill the cups of ancient Romans with virgin clean water. 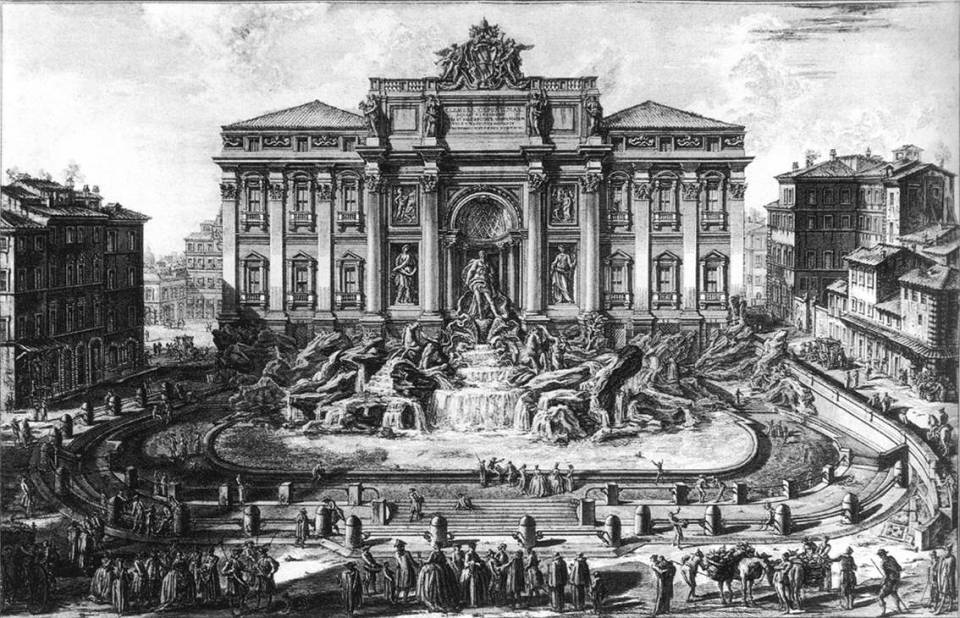 Before the beginning of the 17th century on the Trevi Square (Italian: Piazza di Trevi) one could still quench his thirst from the plain spring flowing to the stone bowl. But the Roman Pontiff Urban the 3rd decided to adorn the centre of the city with more elaborate architecture. One of the most prominent baroque architects, Gian Lorenzo Bernini started to work on the design of the new fountain.

Gian Lorenzo Bernini fulfilled the initial project of the fountain. However, the death of the Urban the 3rd interrupted all the works. But at the beginning of 1700, the drafts saw the light while Berninni’s apprentice, Carlo Fontana, returned to work on the project. Following the inherited ideas of the baroque style of his teacher, Fontana set them in the frame of a more classical style. The architect intensified the image of the initial project by placing a massive statue of the Neptun and his servants at the head of the fountain. 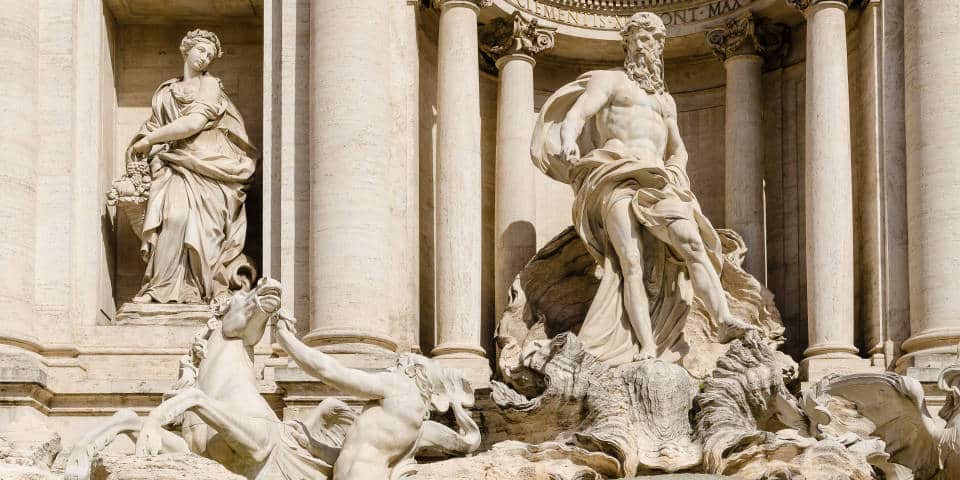 Fontana died in 1714, and the construction was intermitted again. Roman Pontiff Clement 12th announced a vacancy for the head architect. And Nicola Salvi squeezed the win in the course of heated strife between the sixteen renowned architect-engineers of the 18th century. The winner was offered a double challenge. From one side, he was to create something colossal and breathtaking. On the other side – he should have fit that beauty into the architectural look of Trevi Square.

Overlooking Trevi Square, it would be hard for a modern man to perceive Poli Palace (Italian: Palazzo Poli) and the fountain as a united architectural complex. However, Nicola Silvi did his job exceptionally well, and under his guidance, overwhelmingly beautiful sculptures with an abundance of various forms and figures were created. 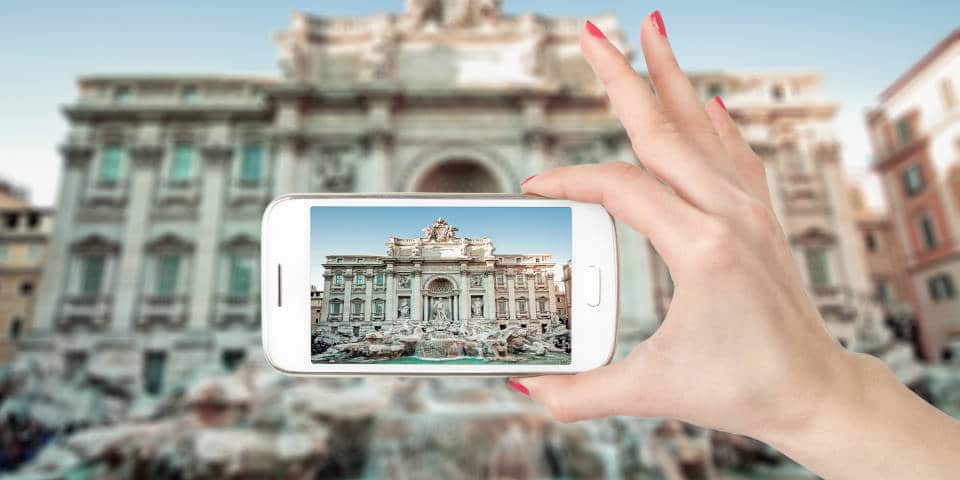 The construction of the fountain lasted 30 years: from 1732 to 1762 years. By this time the scene from the Neptun’s life appeared against the baroque palazzo of the Italian nobleman. The real incarnation of the ocean, mighty and strong, breaks out of the water shed on his wain harnessed with horsefish and water lizards. The architect succeeded greatly in conveying the movements, a powerful endeavor to reach the surface. And an absolutely stunned spectator breathlessly wait this water cavalcade to proceed its onward movement with noises and splashes.

The statue of the sea God epitomizes water that brings this vivifying cool to Rome for many centuries. Behind Neptun’s left shoulder, in the hovel of the frontispiece of Poli Palace, the statue of the Goddess of health is located. She is accompanied by the Goddess of fertility from the right. Both stone ladies decently and with an air of dignity meet the crowds of visitors, who crave to take a glance at the central fountain in Rome every day. 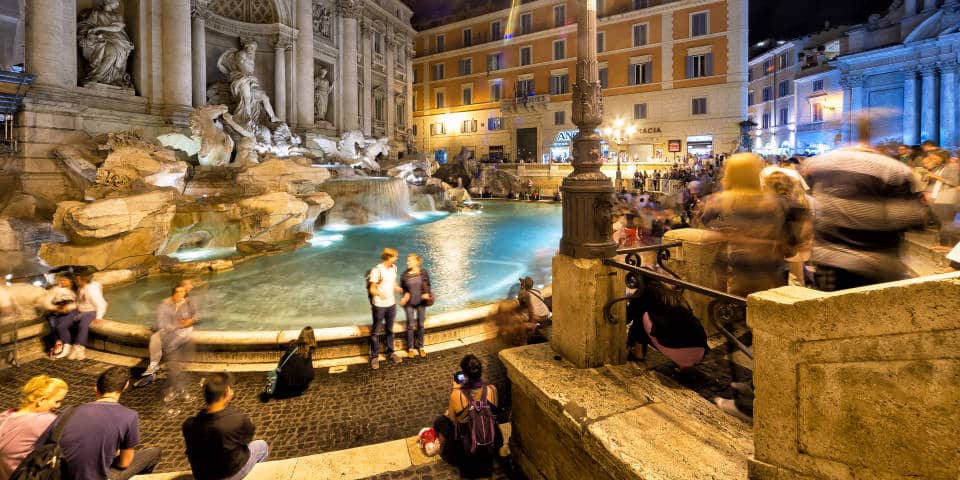 Guests of the Italian capital flock to the sightseeing to admire breathtaking views and accomplish a compulsive ritual. They turn back onto the fountain and throw the coins over their shoulder. It is said that by throwing coins to the feet of Goddesses, one can expect their mercifulness.

More often, awestruck travelers throw in the fountain more than one coin in hopes of finding the one and returning to Italy and Rome again. By the way, tourists in Rome leave about 1500 Euro in the crystal clear water of the Trevi Fountain every day, which is a lovely revenue that amounts to more than a million Euro per year!

The name of the fountain

Concerning the name of the picturesque spring, several versions of its origins exist. The most widespread opinion is that Trevi Square is where three significant streets in Rome are gathered. However, experts in the Latin language think that Italian “trevi” comes from the altered Latin word “trivium,” which can be translated as “junction of the three roads.” The second legend tells us a story about a young lady named Trivia, who managed to give ancient builders a hint where the spring with pure drinking water was located to construct the aqueduct. 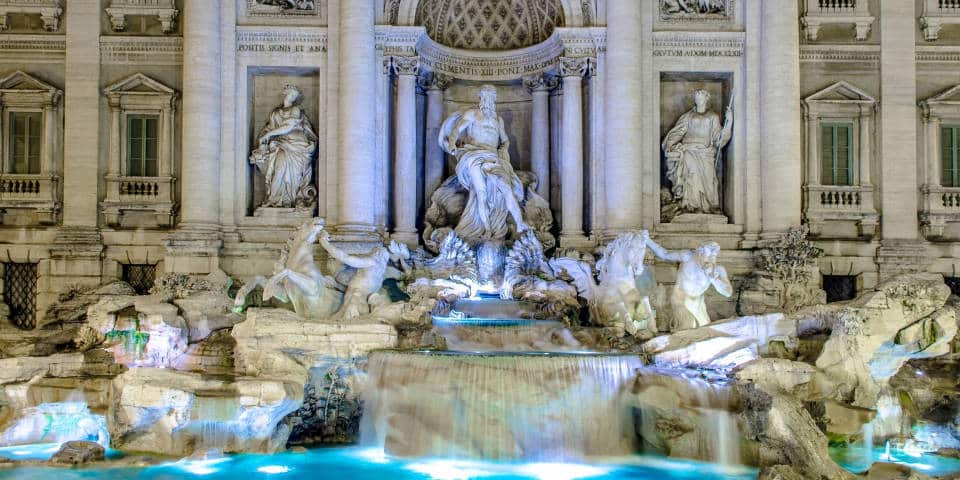 Trevi Fountain is a champion among his co-brothers in Rome. His width amounts to 20 meters, while the height is about 26 meters in the center! Apart from the impressive size, the artificial reservoir can be proud of being located close to the ancient residence. In due time Russian nobility took fancy to Poli Palace. Princess Mariya Volkonskaya, in particular, rented the palace’s first floor in the 30-es of the 19th century. In that apartments, she hosted such guests as Nikolay Gogol, the Brullovs, Fedor Brunni, Michael Pogodin, and some other representatives of the artistic society. 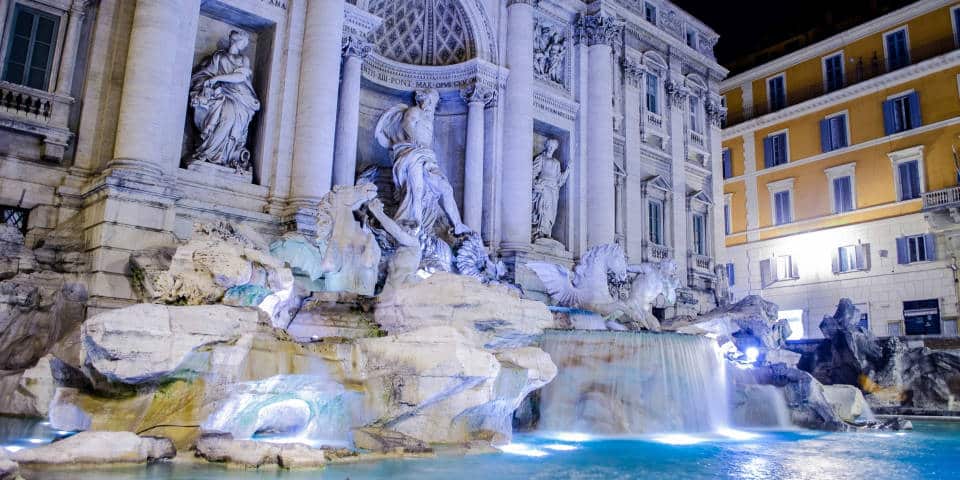 Being one of the most famous sights in Rome, one can find Fountain Trevi in postcards, photographs, and even on the video. But the fountain acted its most remarkable part in the movie by Federico Fellini, “The good life” (“La Dolce Vita”). The icon of the Italian film, Marcello Mastroianni, and drugged with all life pleasures blonde, Anita Ekberg, put on an act a scorching scene in the freezingly cold water of Fountain Trevi in January.

Furthermore, it played a significant role among other Italian beauties in shooting Audrey Hepburn and Gregory Peck in the movie of another film director William Wailer. Not to mention that Fountain on Trevi Square also starred in the film “Madly in love” (“Innamorato pazzo”), where an intractable macho, Adriano Celentano, untreasured Rome in all its glory to a foreign princess Ornella Muti.

From June 2014 to November 2015, the fountain was officially closed for visitors because of reconstruction procedures. And the reason for that was the decay of stone constructions, daily necking down by the water streams and crowds of tourists. Needless to say that the last reconstruction occurred about 125 years ago. It was a close call when in 2014, superb sculptures started losing some of their parts, and emergency repair was organized immediately. 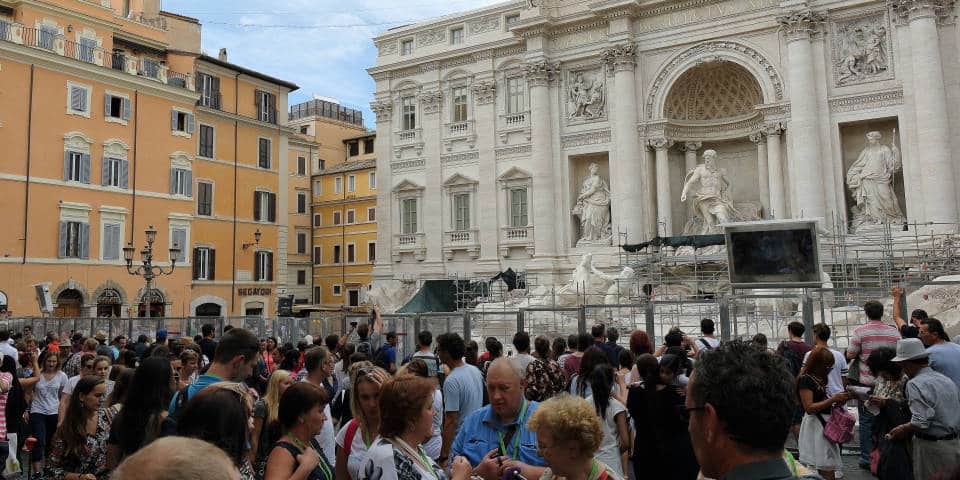 However, the fashion house “Fendy” took a particular interest in reconstruction of the famous fountain. According to approximate estimates 2 millions and 200 thouthand Euro were needed for the renovation of the monument of art.

The distance from the Spanish Steps to the Trevi Fountain is only 650 meters (0.4 miles). You can walk it in just 8 minutes. 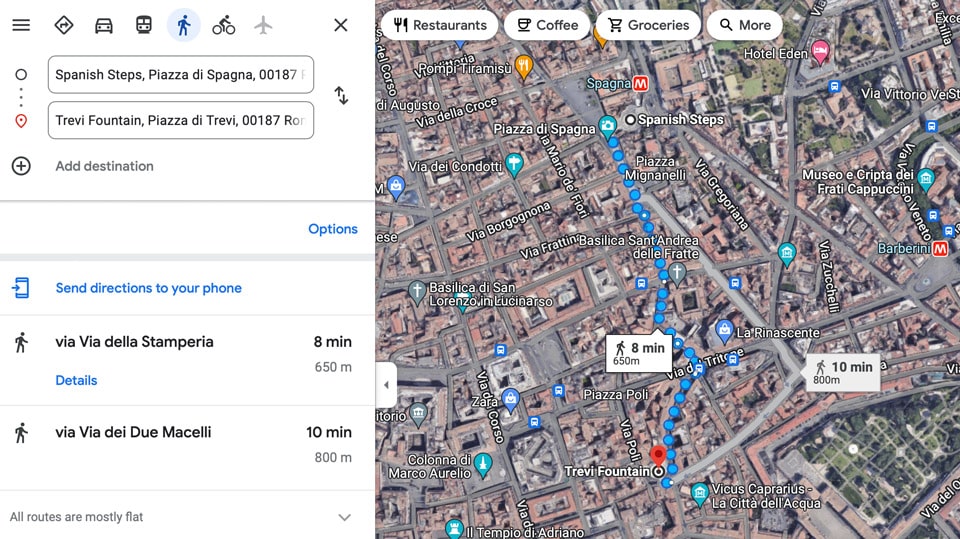 As a local expert, I recommend a more exciting and self-guided sightseeing route: 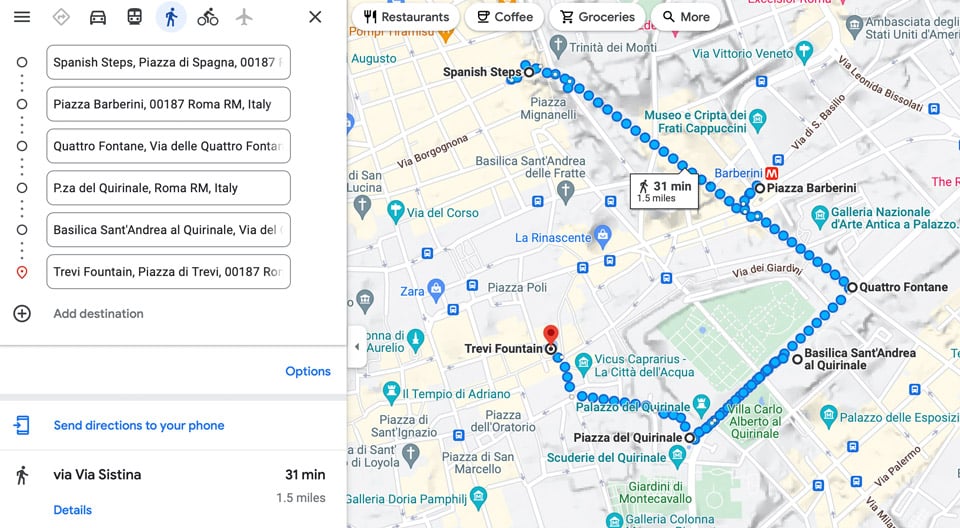 The length of such an informative and beautiful route is only 1.5 miles. Considering visits to churches and photographs against the backdrop of attractions, the walk will take about 1 hour.

The Trevi Fountain is located in the region called Trevi, and the Colosseum in the Monti region, the distance between them is 1 mile (1.6 km). You can walk it in just 20 minutes. 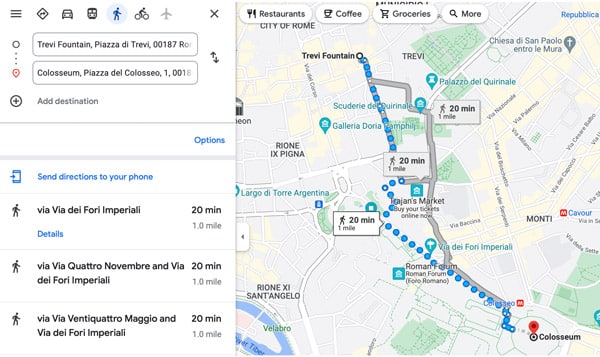 Below more exciting and self-guided sightseeing route from Trevi Fountain to Colosseum: 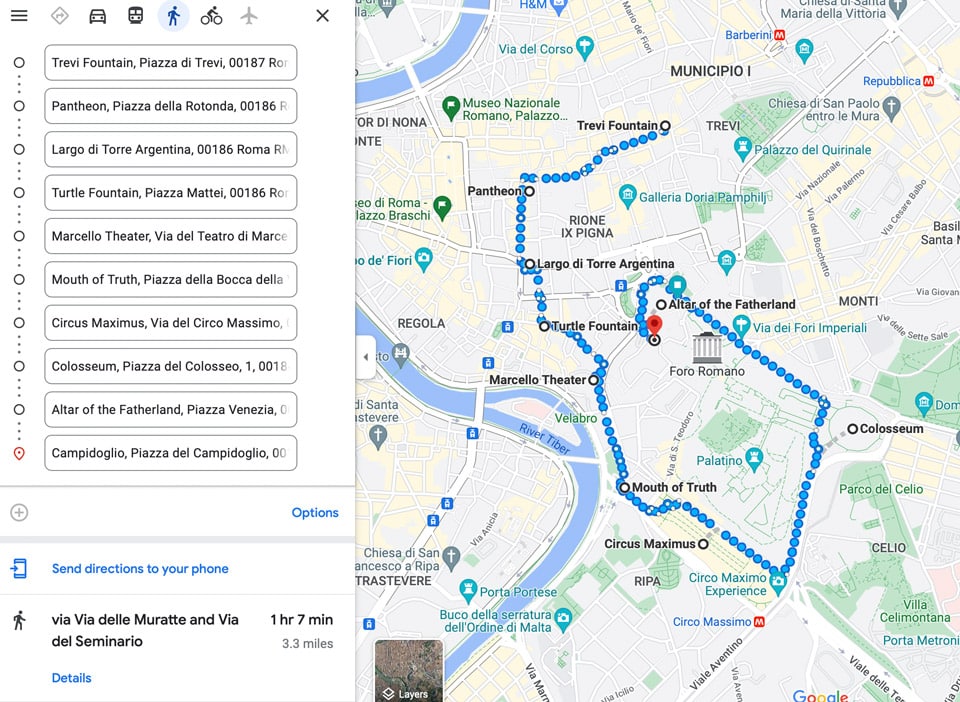 The route is 3.3 miles (5.3 km) long, and the walk will take approximately 2 hours, including sightseeing.

If you want a private tour or get advice on planning a vacation, please contact me through the contact form.
I wish you a perfect holiday in Rome.