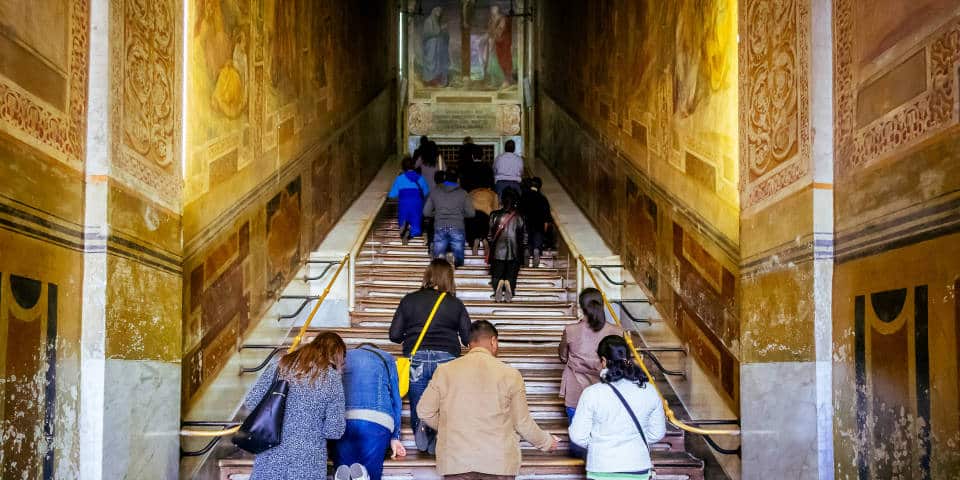 La Scala Santa (Holy Stairs) is one of the most valuable relics of the Christian faith, located in Rome. Twenty-eight marble steps lead to the Holy of Holies (Latin: Sancta Sanctorum), the chapel of the popes, located in the Lateran Palace (Italian: Palazzo del Laterano).

The legend says, it is the very stairs, down which procurator Pontius Pilate walked Jesus Christ to judgement.

FAQ about Holy Stairs in Rome

Frequently Asked Questions
Can I climb up the Holy Stairs in Rome?
Yes, of course. Climbing the holy stairs is an essential act of worship for all Christians. To make the pilgrimage, you must climb 28 steps on your knees.
Was Jesus crucified in Rome?
No, Jesus was not crucified in Rome. Instead, the Bible describes the execution of Jesus of Nazareth in Jerusalem under Roman rule at the beginning of the Christian era (between 30 and 36 AD).
Did Jesus ever walk in Rome, Italy?
Jesus himself never came to Rome in Italy. However, in Rome, many places are associated with the worship of Jesus thanks to his followers, the apostles Peter and Paul.
Who brought the Holy Stairs to Rome?
The Holy Stairs was brought to Rome from Pontius Pilate's palace in Jerusalem in 326 by Saint Helena, mother of the Roman Emperor Constantine after she had converted to Christianity.
What are the famous steps in Rome?
The most famous steps in Rome are:

According to the Holy Scripture, the trial of Jesus was held in Pilate’s property (Pretoria) in Jerusalem. Sentenced to death, the son of God went along wide marble steps. Pontiff Sergius II writes that in the 4th century AD, the relic remained in Rome due to Iulia Helena Augusta, mother of Emperor Constantine I. Bishop Sylvester I received gifts from her and ordered to establish the relic in the papal palace.

At the end of the 16th century, Lateran Palace was significantly reconstructed. The Scala Santa acquired its current location. It is also assumed that 4 more steps were added to the original 24 ones. Construction works were carried out in a short time, workers did not dare to desecrate the relic with their feet. The staircase was set out from top to bottom.

By the end of the 19th century, the worship of the Scala Santa or Stairs of Pilate (Latin: Scala Pilati) had reached its peak. Numerous pilgrims flocked to the Lateran Palace on the eve of all the great church holidays. People gathered to walk the way from the foot of the stairs to the Basilica of San Lorenzo (Italian: Cappella di San Lorenzo in Palatio) on their knees reading the appropriate prayers at every step. Finally, they had to cover marble under the wooden blades to prevent it from complete destruction. 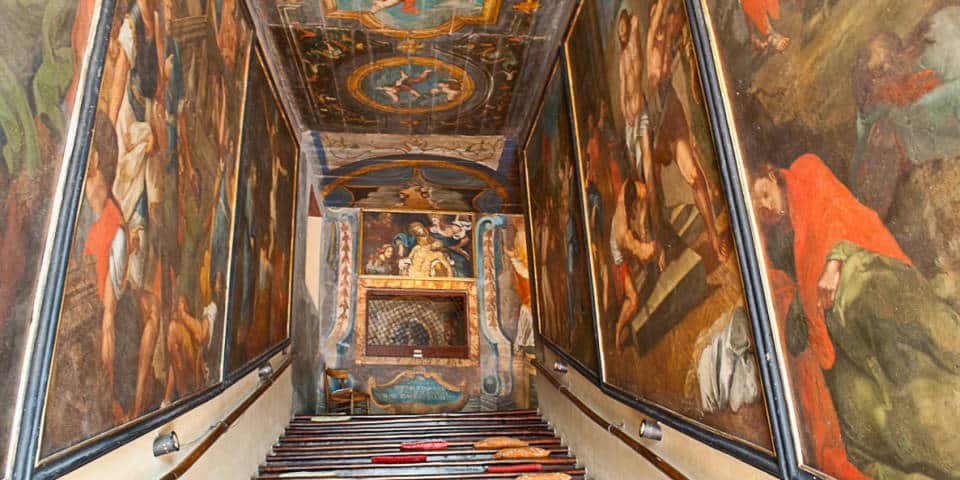 All the believers feel a great thrill when looking at traces of blood from the Savior’s back tormented with whips during the procession to Calvary. The slits in the form of a cross on the protective wooden panels allow reach the most valuable relics of the Holy Stairs. Now the stairs have unique windows with a good field of view which are mounted on the 2nd, 11th, and 28th steps.

The frescoes of medieval painter Baldassare Croce create a special atmosphere on the path leading to the Sancta Sanctorum. The centerpiece is a painting depicting crucified Christ, Mother of God, and St. John. The rest of the illustrations of the Holy Scripture emphasize the importance of the Lateran Palace and the Scala Santa.

In 2007, the stairs were restored, and Croce’s works found lost colors and expressiveness. 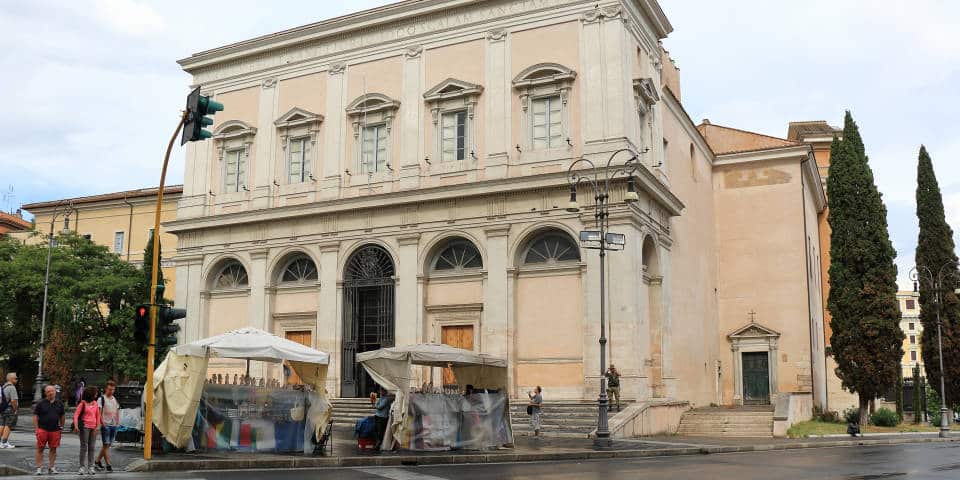 Near the Scala Santa’s first step is two white marble statues. One of them is “The Kiss of Judas” by Alberto Giacometti, and the second is “Pilate’s court” made by the same sculptor. Giacometti lived and worked in the XX century; his works are dated from 1901 to 1966.

It is believed that the pilgrims who have climbed the Scala Santa during the celebration of a great post (every Friday) acquire indulgence. During all the other days, visitors get a partial remission of sins if they walk all the steps on their knees with an open and humble heart.

Being on the ancient steps, Catholics send up “Prayers while climbing the Scala Santa” and Orthodox – Akathist to the Divine Passion of Christ.

There are sidesteps to the Holy of Holies passing a series of worshipers on bended knees.

The Basilica of San Lorenzo or Sancta Sanctorum, where the steps lead, is the place where the treasures of the Roman pontiffs are kept. And the most valuable property of the chapel is the miraculous icon with the face of the Savior Akeropit (the 6th century AD).

Things To Do After Visiting the Holy Stairs

After visiting the holy stairs, I recommend taking a tour of the San Callisto Catacombs and, of course, visiting the Archbasilica of St. John Lateran.