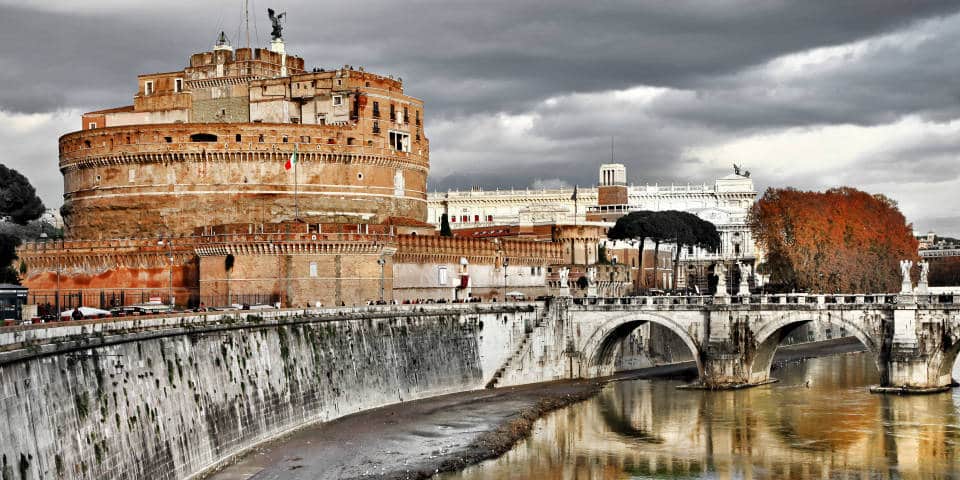 The Mausoleum of Hadrian, usually known as Castel Sant’Angelo (Castle of the Holy Angel), has a grand view and impressive history. During its long existence, built at the dawn of Christianity on the banks of the Tiber, the cylindrical mausoleum was the last refuge for the Roman emperor, the residence of pontificals, fortress, then prison, and later – the museum and treasury.

The tomb of Emperor Hadrian Publius was erected on the high bank of the river in about 139 AD. The original mausoleum had a form of a cylinder and was richly decorated. A flat roof of the building featured an ornamental garden in the center of which a gilded quadriga was set. In 138, the Emperor’s ashes were placed in the tomb with his wife Sabine and adopted son urns. Also, on Hadrian’s order, Ponte Sant’Angelo (Bridge of Hadrian), leading from the center of Rome to the tomb, was built. 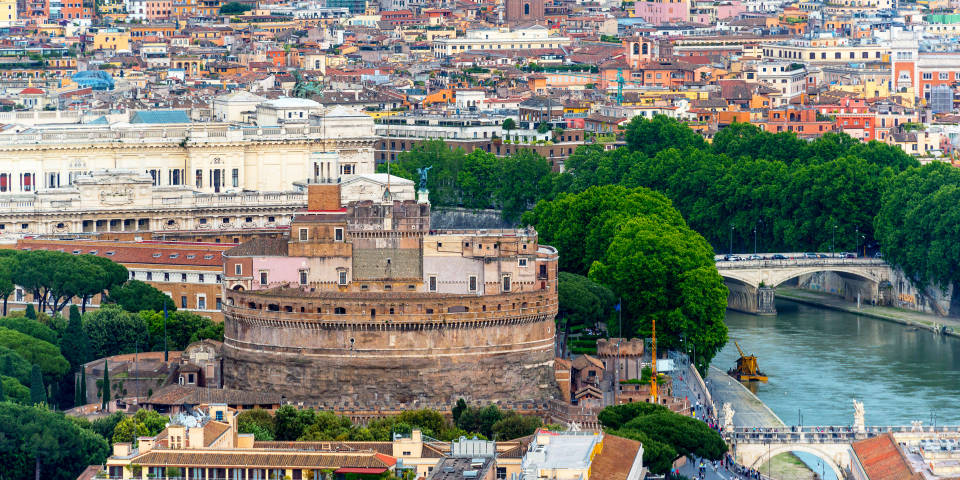 By the 5th century AD, Hadrian’s mausoleum had lost its former luster and solemnity. It was gradually transformed into a military fortress. During the Goths’ invasion, most of the bronze ornaments, urns, and statues were stolen or destroyed.

There is a legend which says that the Archangel Michael appeared above the mausoleum putting his sword back into the sheath. Thus, the end of the plague in 590 AD was marked. To celebrate this, the tomb was given its present name.

Another interesting fact: in Italy and in many other European countries, a man who had just sneezed said: “God bless you!“. In the Middle Ages, it was believed that the plague began with sneezing attacks. And only God could help the plague ill person!

By the 14th century, Castel Sant’Angelo in Rome became the pope’s residence. Nicolaus III connected the castle to St. Peter’s Basilica (Italian: Basilica Papale di San Pietro in Vaticano) by a covered corridor called Passetto di Borgo. Pope Clement VII found a refuge in the castle during the invasion of Charles V’s army in 1527 in Rome. The inhabitants of the besieged fort actively attacked the enemies through the slit windows. Famous sculptor-goldsmith Benvenuto Cellini was one of those glorious defenders.

A little later, comfortable apartments ordered by the pontificate appeared on the mausoleum territory if the story of the siege would repeat. Unfortunately, the castle also served as a prison for some time.

The main architectural ensemble of Castel Sant’Angelo has formed long ago, during the reign of Emperor Hadrian. A powerful cubic foundation was faced with expensive marble. There was a “washer” of the mausoleum on the top of the pedestal, made of volcanic stone. Outside, the building was faced with travertine and decorated with carved pilasters in the form of oxen’s heads (Bucrani). The tomb was surrounded by a wall that served as a decoration as well as a fortification. 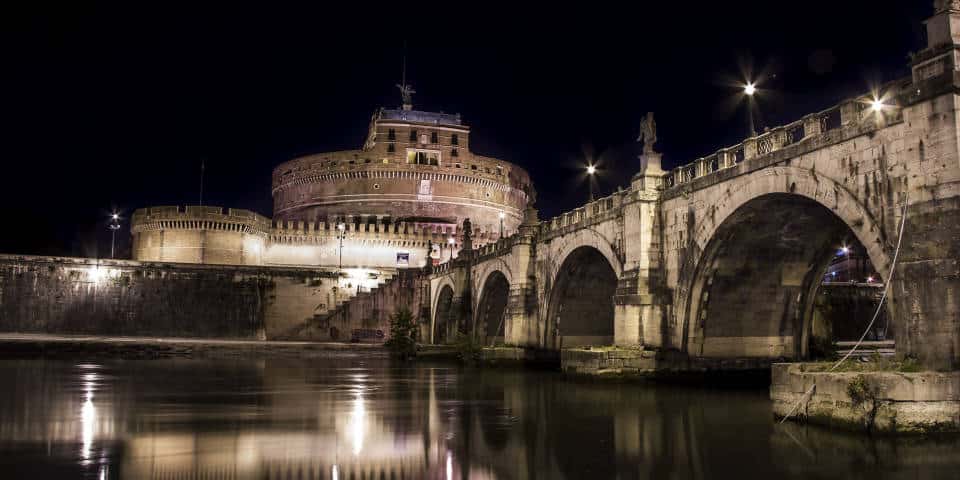 Nowadays, the castle looks much more modest than it was under Hadrian. Travertine, marble, pilasters, and bronze were lost over the centuries. However, the external structure of the mausoleum has remained almost unchanged in contrast to the internal one. Ancient tombs where the Emperor and his family, Antonius Pius, Marcus Antonius, and their nobles rested were damaged. Urns with the ashes were lost.

In the 14th century, the mausoleum has been turned into a fortress. Pope Boniface IX (Latin: Bonifacio IX) ordered the architect, Niccolo Lamberti, to strengthen the castle walls, equip bastions and create the only entry in the form of a drawbridge. In the building itself, a new premise – St. Michael’s Chapel (Italian: Cappella San Michele Arcangelo) – appeared.

In the 15th century, Pope Alessandro VI of the house of Borgia said that architect Antonio Giamberti da Sangallo had to turn the castle into a natural stronghold for battle. The castle was fortified with four bastions and a ditch around the buildings. The fortress also had papal apartments which featured frescoes from the famous Pinturicchio. A new palace of Alessandro VI was used for luxurious receptions and celebrations. 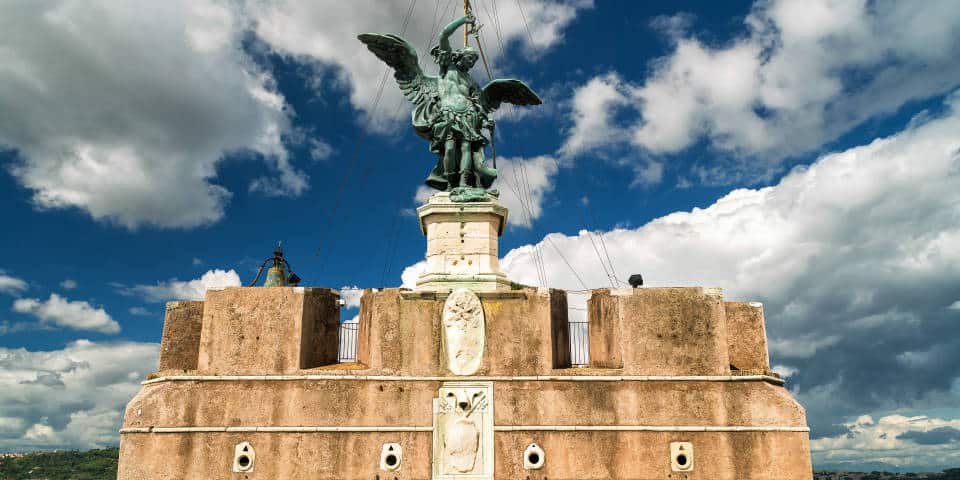 In 1536, Raffaello da Montelupo created a statue of the Archangel Michael with a sword. The marble saint with bronze wings reminds the Romans of the events described in the legend and protects the castle. In the 17th century, in the castle, Angel’s Patio appeared where de Montelupo’s Archangel had found its place.

In the second half of the 17th century, Urbano VIII destroyed most military and decorative buildings of the 15-16th centuries. Instead, he created a new version of the fort with a solid defensive wall and fortifications. They began to decorate Ponte Sant’Angelo, leading to the castle, with the statues of angels in 1667. Giovanni Lorenzo Bernini and his students have spent about two years completing 10 Baroque-style sculptures, which guard the bridge up to today.

In the 18th century, not in stone but in bronze Archangel Michael saw the world. The work of Flemish sculptor Peter Anton von Verschaffelt still adorns the castle’s roof. 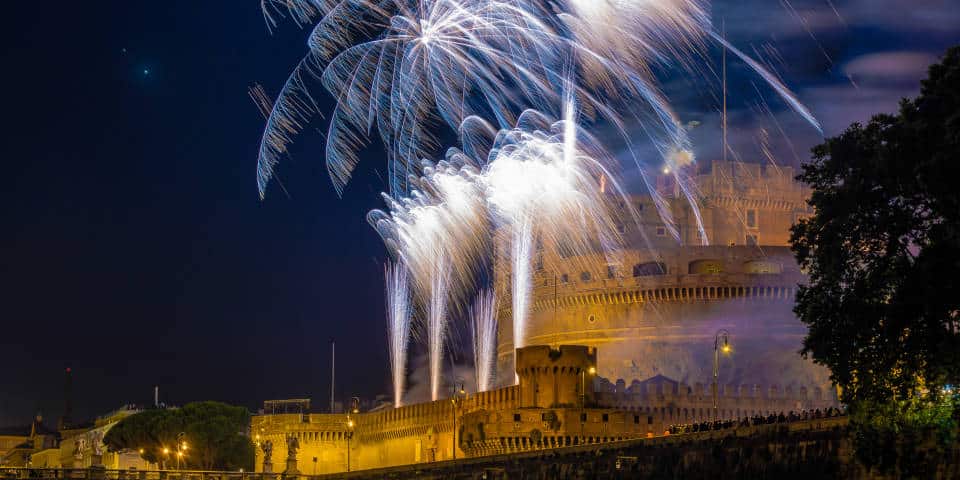