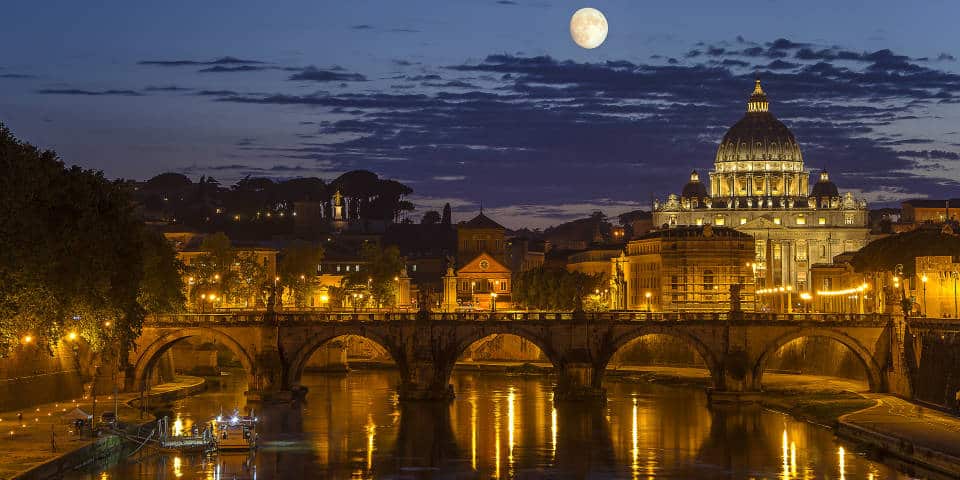 The Tiber river (Latin: Tiberius; Tevere) has been a so-called identifying mark of Rome since the days of the Great Empire. A meandering river surrounds the famous hills of the Italian capital, lovingly skirting the silhouette of Trastevere.

The glistening mirror of the river is surrounded by many landmarks of ancient and medieval architecture. Dozens of bridges connect the left and right banks of the Tiber, making Roman landscapes so beautiful and romantic.

The Tiber flows out of the Apennine Mountains slopes in Emilia-Romagna. A full-flowing mountain river runs through Umbria and Lazio on its way to Rome, joined by the rivers Nera and Aniene. Before Rome, it is flanked by concrete fortifications, and the watercourse is changing into the channel Fossa Traiani across the capital. The endpoint of the Tiber is the Tyrrhenian Sea (Italian: Mar Tirreno). 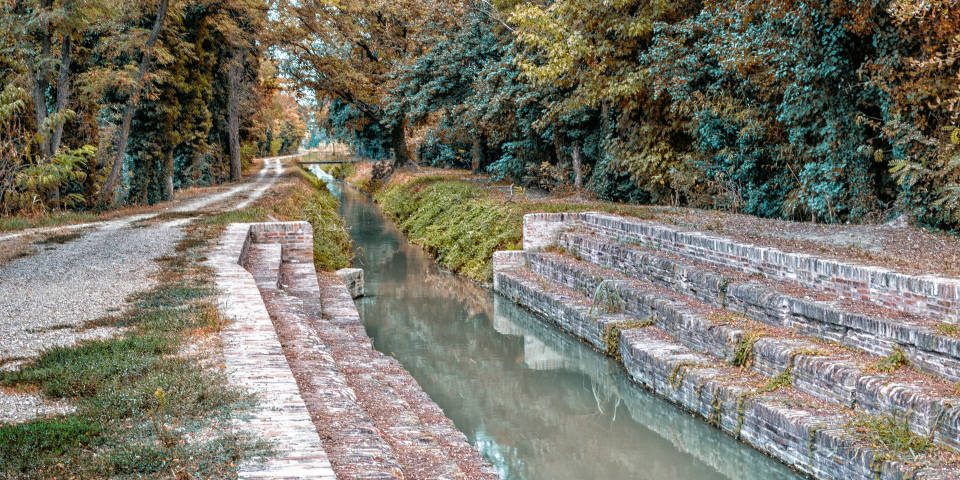 The total length of the third longest river in Italy is 406 km (252 mi) and the basin is 17,375 square kilometres (6,709 sq mi). The river is the most important source of water supply for Rome. Italians often call the Tiber “flavus”, which means “white” from Latin. This nickname is used because of the yellow-whitish color of the water.

Origin of the Name

There are several suggestions about the origin of the name “Tiber.” According to one of them, “Tiber” has a pre-Latin origin, deriving from the noun “Tibur” – an ancient name of the town of Tivoli, located 30 km away from Rome. In this article, you can read about a one-day tour to Tivoli from Rome.

Also, the name of the river was mentioned in the writings of the Etruscans, being called “Tiferios,” which could be adopted and transformed by the Italians into “Tiber.”

However, there is a legend in the biography of the famous river. King Tiberinus, who lived in the 900’s BC, was drowned in the river Albula, which later became known as Tiberius. Jupiter made the dead king a guardian of stormy waters, called Volturnus. It is believed, that due to this ancient myth, sculptors began to depict rivers, seas and oceans in the form of mighty men. 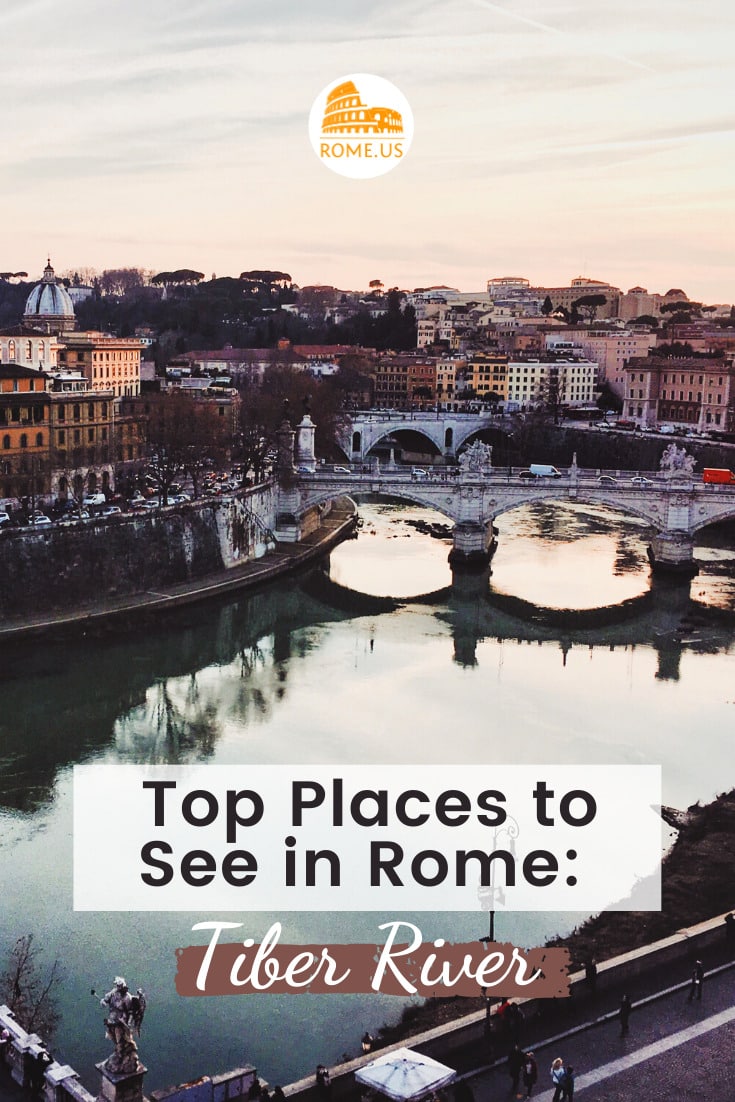 It was the Tiber, where, according to the legend, newborn Romulus and Remus, the founders of Rome, were to be drowned. Historians believe that Rome was founded in 753 BC on the banks of the river Tiber about 25 km (16 mi) from the coast of Ostia. In ancient times, the river served as a border between the Etruscans, located to the west, the Sabines – to the east, and the Latins – to the south. 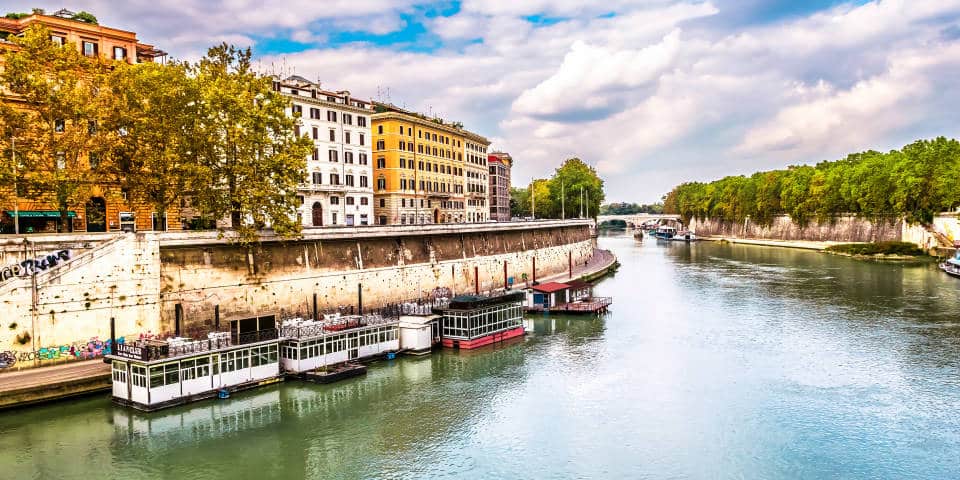 The river played a significant role for the Romans, who built its economy due to the movement of merchant ships. Traders brought provisions, building materials and other goods to the capital. During the Punic Wars in the 3rd century BC port of Ostia was crucial for sea battles. Thus, the Tiber became also a strategic dominance in the hostilities of Rome.

Later, a spacious berth was built along the coast of the river near the Campus Martius area. After the arrangement of the Roman central sewer system, Cloaca Maxima, the Tiber became an important part of it, delivering clean water to the city center through underground tunnels and pipes.

Over time, the river became shallow, and the capital port and maritime trade moved to Rome’s neighbor – Fiumicino. In the 17-18th century, the pontificate made a lot of effort to clean the water body bed in Rome. Thus, the ecology of the Tiber was improved. However, nothing has changed in river transportation since it lost its former significance.

The left and right banks of the Tiber connect 26 bridges on the territory of Rome. Along with the new bridges, a few of the old ones have successfully survived. For example, the Milvian Bridge (Italian: Ponte Molle or Ponte Milvio) was founded in the 1st century BC to prolong the Via Flaminia (an ancient Roman road) and to connect Rome with Ariminum (modern Rimini). In the 4th century AD, the Milvian Bridge was a place for a tremendous battle between two emperors, Maxentius and Constantine the Great (Latin: Constantinus).

It was not a battle for power, but for the dominant religion. The defeated Maxentius was drowned in the Tiber, and Constantine became one step closer to the status of the sole emperor of Rome. Thus, the era of Christianity began. Nowadays, close to the Mulvian bridge, the Stadio Olimpico, which holds domestic football games of Roma and Lazio clubs, is located.

Ponte Sisto is a pedestrian bridge crossing between the right bank of the Tiber and Trastevere. The medieval stone bridge, dedicated to Pope Sixtus IV, looks very beautiful in the background of the old quay. On the left bank, right across the bridge, is Piazza Trulissa – a popular meeting place for residents of the capital and visitors of Trastevere. From July to August, the Tiber at Ponte Sisto quay is filled up with tents with snacks, cocktails, and live music. Everybody is invited to look at local prices and plunge into the cozy atmosphere of the evening.

Read about Best Restaurants in Trastevere District with local food. 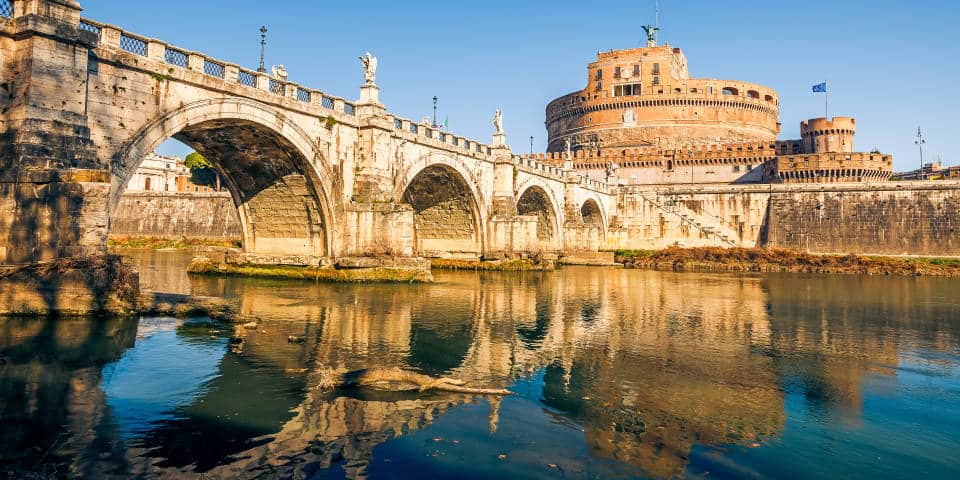 To the south of Vatican City, on the river, there is a small island – Isola Tiberina, which looks like a fishing boat from a bird’s-eye view. In the 10th century, The Basilica of St. Bartholomew on the Island (Italian: Basilica di San Bartolomeo all’Isola), where the tomb of San Bartolomeo is, was founded. If you cross the Tiber across the island, then, on the right bank, one of the most amazing Roman sights – the Mouth of Truth (Italian: Bocca della Verita) – can be seen.

Ponte Sant’Angelo (meaning the Bridge of Hadrian) dates back to the 2nd century AD. It is used only for a walk. In ancient times, the bridge was named after Emperor Hadrian, because it was built under his command. The crossing leads to the Mausoleum of Hadrian, also known from the Middle Ages as Castel Sant’Angelo. The castle’s huge stone cylinder keeps the Christian pontiffs’ remains and many historical artifacts. In the 15-16th centuries, the bridge, faced with marble, was decorated with statues of Saints Peter and Paul. And in the 17th century, Giovanni Lorenzo Bernini completed the decor with 10 statues of angels.

FAQ about the Tiber River

What is the Tiber River known for?
The Tiber River is one of the longest rivers in Italy, flowing right through the historic center of Rome. In ancient times, the Tiber was navigable and played an essential role in the development of the Eternal City.
Where is river Tiber located?
The Tiber River is located in central Italy. It stretches for about 249 miles (400 km), starting from Tuscany through Umbria, Lazio, past Rome, to the Tyrrhenian Sea at Ostia (literally translated as "mouths" of the river).
What is the Tiber River in Ancient Rome?
In ancient Rome, the Tiber River was a reliable source of fresh water. The Romans used this water to irrigate their farms and provide drinking water for people and animals. Rome was not located at a river delta but developed about 15 miles (25 km) from the Tiber River flows into the Mediterranean Sea.