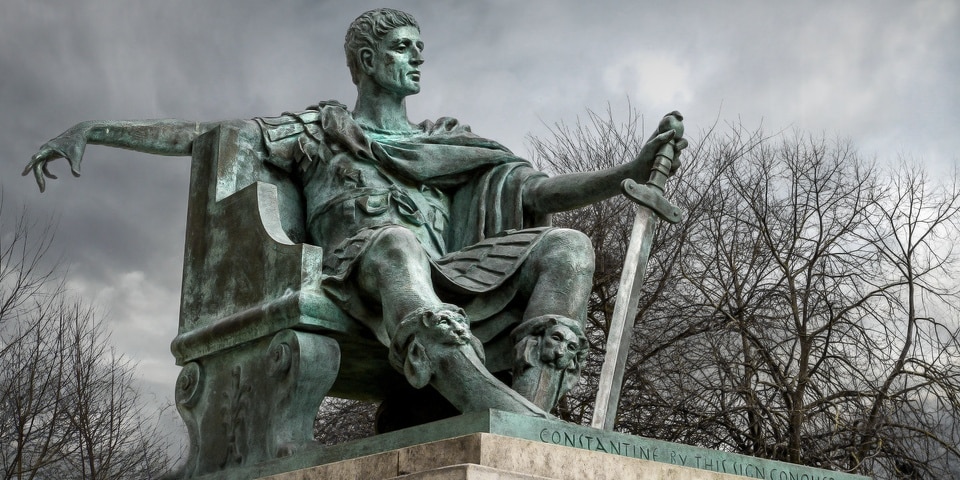 Constantine I or Constantine the Great was a Roman emperor from 306 to 337 AD. Diocletian’s previous emperor decided to split the empire into two parts since it was too large to be ruled by one person, creating a tetrarchy or the rule of four. Diocletian ruled the east from Nicomedia as an “Augustus,” with Galerius as his “caesar.” Maximian and Constantius the Pale ruled the west.

The son of Constantius, Constantine, reunited the split empire and moved the capital away from Old Rome and built a new capital – Constantinople

Constantine, Gaius Flavius Valerius Constantinus, was born at Naissus in today’s Serbia from 272 to 285 AD. His father was a military commander and the caesar of the west, so Constantine lived his life in the imperial court with a later rise in ranking as a staff officer for Diocletian. All people who surrounded Constantine thought about him as a person with endless energy.

In 305, Diocletian and Maximian abdicated their thrones to Galerius in the East and Constantius in the west. However, the son of Maximian, Maxentius, and Constantine felt betrayed. It led to a long battle over control of both parts of the empire. After the abdication of Diocletian, Galerius allowed Constantine to return to the west in 306 and to serve under his father. Thus, before Constantius died of leukemia (the reason he was called “Pale”) in 306 in York, Constantine had a chance to campaign with his father in Britain against the Picts.

After his father’s death, Constantine continued to build a reputation as a person able to make strong decisions in a fast way, and in 307, he attacked the Franks. There, he killed two Frankish kings by throwing them to beasts in the amphitheater at Trier. He gained the respect of the army, and they started to trust him.

With the death of Constantius and the success of the war in Britain, people expected Constantine to become the new Augustus in the west. However, Severus, who was caesar and a close friend of Galerius, was advanced to the post, despite the claim that Constantius had named his son Augustus before the death.

Despite the official decree, Constantine was declared Augustus by his people. Galerius, however, refused to acknowledge this statement, calling himself a caesar. It shouldn’t be overlooked that Maxentius ignored Galerius and Constantine and declared himself Augustus in 307 AD. With the support of Rome and the Praetorian Guard, he controlled Sicily, Corsica, Sardinia, and some parts of North Africa. In the end, six different people will eventually take control in the west.

Because of the friendship with Galerius, Severus was not trusted by both Constantine and the brother-in-law of Constantine Maxentius. They united with the former Augustus Maximian to defeat the new Augustus and joined forces against Severus. Unfortunately for Severus, who received the order to stop Maxentius, his army left him. Being feared for his life, he moved to Ravenna to be killed outside of Rome. His death prompted Galerius’s unsuccessful invasion of the west with the military forces. In 308 AD, a new tetrarchy was formed with Licinius as the new Augustus, while Constantine retained the position of caesar. Eventually, Maximian committed suicide.

The Battle of Milvian Bridge

Maxentius left Rome to meet with Constantine in the famous Battle of Milvian Bridge in 312. One day before the battle, Constantine saw the sign of the cross superimposed over the sun in the sky. Moreover, he saw an inscription under it: “In Hoc Signo Vinae,” which meant “conquer by this sign.” Later during the night, Constantine had a dream with the sign’s explanation, where Christ appeared in front of him, telling him to carry the sign of the cross into the battle.

The next day, the old banners were changed with new ones with the sign of the cross. Constantine easily defeated Maxentius, who fled back to Rome. However, before coming to the city, he fell into the river and drowned. Historians consider this victory an important turning point in history, which meant a fusion of church and state.

Constantine gained complete control over the west. One of his first acts was to issue the Edict of Milan, a toleration of all religions

Galerius and Maximinus Daia were serving as Augustus and caesar in the east. However, Galerius soon died, and Maximinus and Licinius started fighting for the east’s control. This led to the split of the empire between them, where Licinius got the Balkans and Maximinus got Asia Minor with eastern provinces. Their arrangement didn’t last long, and soon they met in a fight in Thrace in 313. Moreover, Licinius fought under the sign of the cross in that battle.

Licinius and Constantine didn’t have good relationships. Moreover, Licinius married Constantine’s half-sister Constantia. The two men first met on the battlefield in Cibalae in 316, where Constantine defeated Licinius. During the following years, Licinius executed Christians and destroyed churches. This led Constantine to gather an army and defeat him in a second battle at Hadrianopolis.

In 324, Licinius was totally defeated at Chrysopolis and Constantine’s victory reunited the empire

Constantine became the sole emperor when he was 52 years old. He realized that Old Rome was not the city that he wanted to see as the capital, and he changed it to Byzantium. The ancient city had a valuable location on the European side of the Strait Bosporus to control traffic to and from the Black Sea. The city had wide streets with statues of Alexander, Caesar, Diocletian, and Constantine. He rebuilt Christian churches and pagan temples and worked on many other public projects. Finally, in 330, the city was dedicated.

Constantine showed his religious tolerance to both Christians and pagans. In 312, he officially started to claim himself to be a Christian. His mother, Helena, was a devout Christian, and her influence on the son had an obvious effect. Constantine tolerated certain pagan religious practices, but crucifixions were abolished, and pagan sacrifices became forbidden. Moreover, his reign gave the end to the gladiator contests, and there were several new laws against sexual immortality and ritual prostitution.

Constantine was a military commander and the emperor. In 328, he fought the Alemani with his son Constantius II, defeating the Goths in 332 and capturing the lost territories from the Dacians. He died from being ill in 337. The emperor ruled for 31 years. He was buried at the Church of the Holy Apostles in Constantinople, leaving the reign in the hands of his three sons: Constantine II, Constantius II, and Constans. Eventually, Constantinus II defeated his brothers to become the sole emperor.