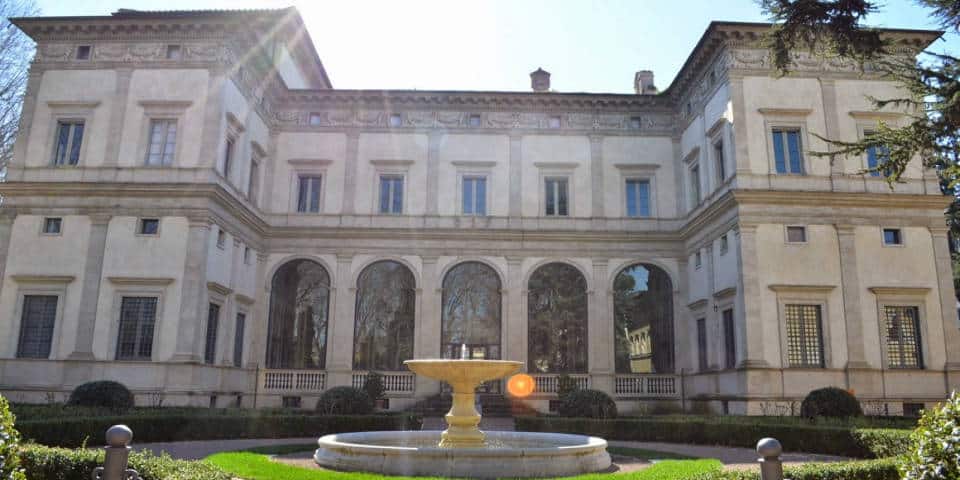 Villa Farnesina is a central mansion of Rome constructed between 1505 and 1511, where you will find artworks of famous Raphael. It works daily, except Sunday, and you can purchase tickets both by online reservation or at the ticket office.

Moreover, the villa is considered one of the most impressive buildings from the Renaissance period in the Eternal City. Additionally, it is set in the middle of a charming garden of bergamot trees, cedars from Lebanon, cypresses, laurel bushes, and evergreens.

The Villa is located in a famous Trastevere neighborhood. Baldassarre Peruzzi designed it during the times of the Italian Renaissance. Peruzzi was one of the most famous designers of his time, who lived and worked in Rome and Siena until he died in 1536. Additionally, he was buried next to Raphael in the Pantheon. Agostino Chigi, the villa owner, commissioned artists such as Giulio Romano, Il Sodoma, Sebastiano del Piombo, and Raphaello Sanzio da Urbino, famously known as Raphael.

Chigi was a wealthy and influential banker from Siena. His interest in business influenced the mission of the villa, where Villa Farnesina wasn’t devoted to leisure but was meant to serve business purposes as well. Since it is located in the city center, the building attracted noblemen, cardinals, and popes. There were comedy and poetry evenings to entertain its guests, while Chigi was popular for his extravagant banquets. Undoubtedly, the main purpose of the villa was to impress its guests. 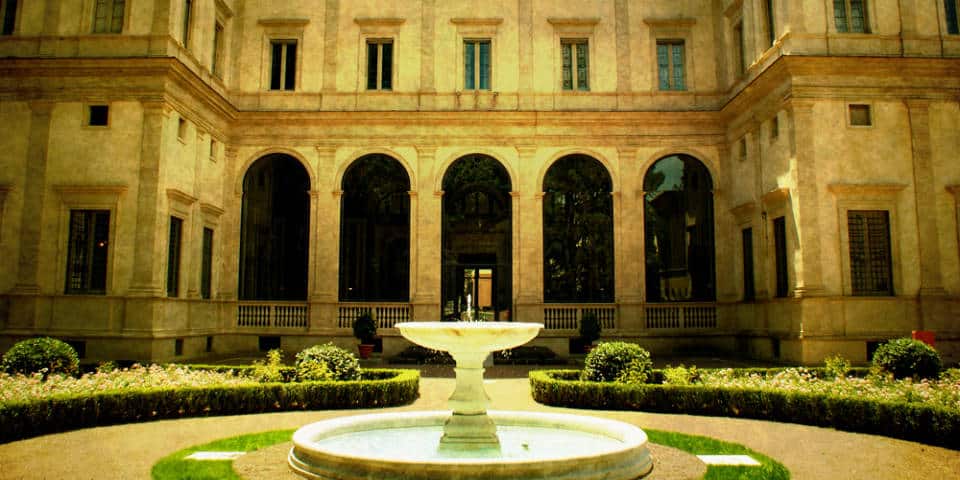 The villa owes its name to its second owner, Cardinal Alessandro Farnese

Once he became Pope Paul III in 1534, the wealth of the Farnese family continued to increase. It is important to note that the famous Borghese family, which was also powerful and wealthy, was a main rival of the Farnese one. They were always competing for the most lavish villas. Today, tours are possible to both Villa Farnesina and Villa Borghese.

There are a central block, two small wings, and two floors. Moreover, you will find very rich décor with various frescoes from favorite artists like Raphael, Sebastiano del Piombo, and Peruzzi.

The first floor contains frescoes of the Sala di Galatea, one of the most famous Raphael masterpieces. Also, the ceiling is covered with astrological paintings that show the position of the stars during the day when Chigi was born. Agostino Chigi is the first owner of the villa, a wealthy banker from Siena.

The second floor contains the Sala delle Prospettive, another majestic room. Its décor is based on the optical illusion from frescoes that show the Eternal City through marble columns.

Villa Farnesina is considered a luxury mansion that predominated in Italian society during the Renaissance. One of the most important reasons the building is that famous and impressive is its frescoes. Undoubtedly, it is worth visiting the villa. 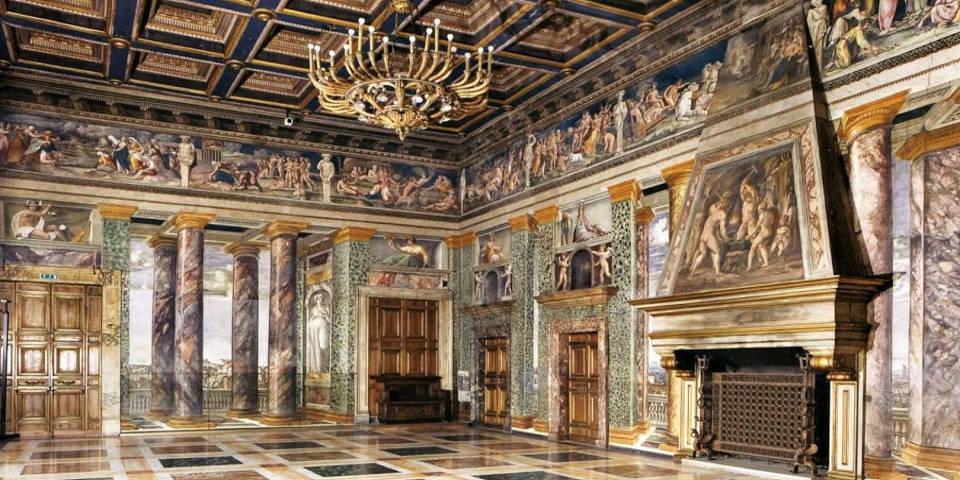 When entering the Villa, there is a selection of Raphael’s mythical frescoes, including the legendary Cupid and Psyche and The Triumph of Galatea

The Loggia of Cupid and Psyche

An entrance of the ground floor leads to the Loggia di Psyche, where you will find frescoes painted by Raphael and his pupils Giulio Romano, Francesco Penni, Raffaellino del Colle, and Giovanni da Udine. The loggia was decorated in 1518, five years after the creation of the Galatea. The frescoes represent episodes from the fable of Psyche, also known as Apuleius’s Golden Ass. 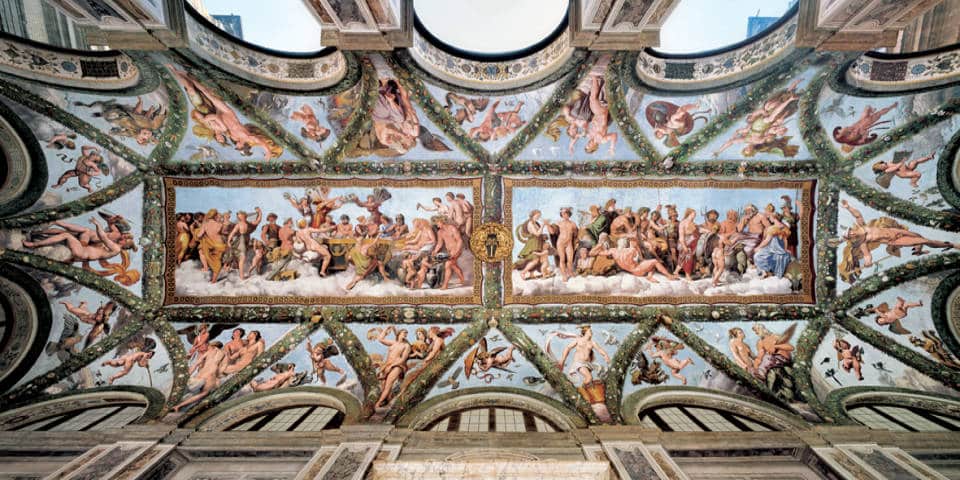 The Loggia of Galatea

To the right of the loggia is the Hall of Galatea, which contains the magnificent fresco depicting the triumph of the nymph Galatea. The subject represents a poem by Angelo Poliziano, a poet from Florence. It embodies how the giant Cyclops, Polyphemus, performs a love song to the sea-nymph Galatea. Moreover, the fresco shows how Galatea rides across the waves with two dolphins, laughing at his song and a company of gods surrounding her. 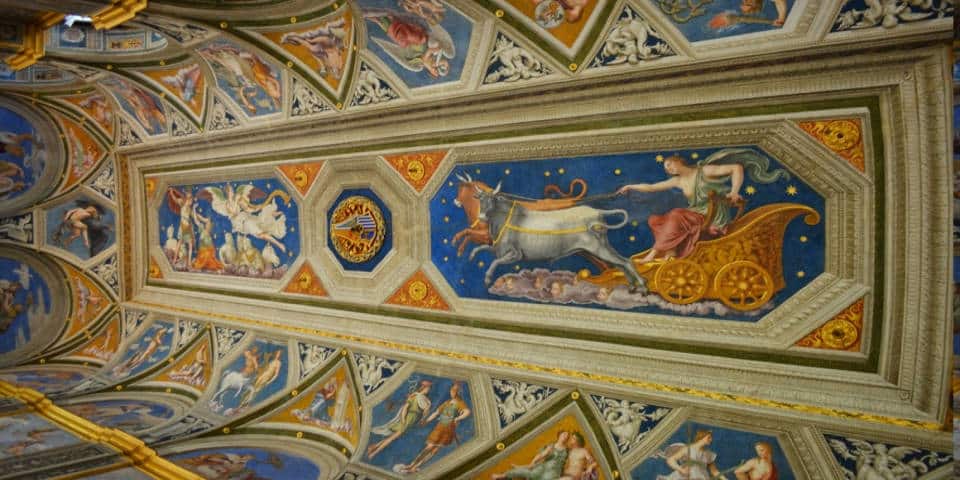 The landscapes around the fresco were painted by Gaspare Dughet, while the lunettes embody several myths, and the square near Galatea is made by Sebastiano del Piombo. Moreover, the roof painted by Peruzzi represents the twelve signs of the zodiac with planetary gods located in some of them. 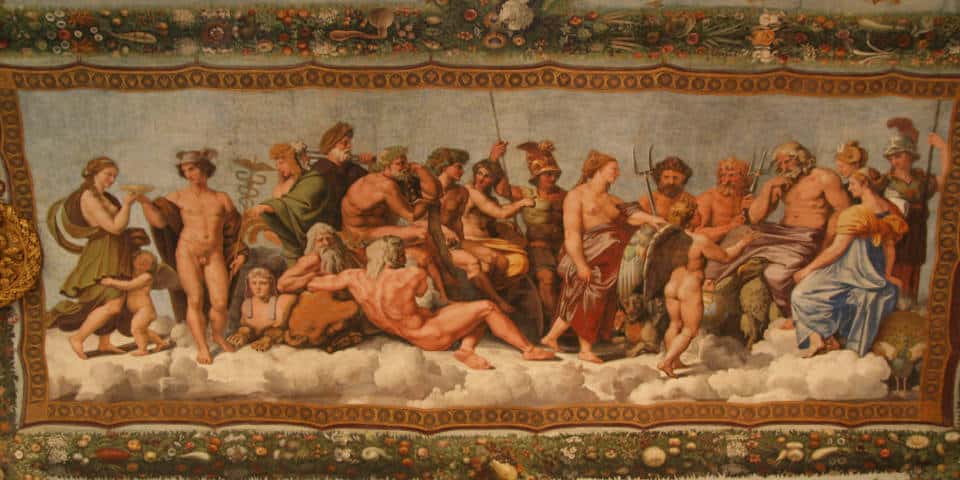 Villa Farnesina is a luxurious mansion in the center of Rome. It contains masterpieces from such great artists as Raphael. Undoubtedly, it is worth visiting this villa and exploring beautiful frescoes that went through centuries!