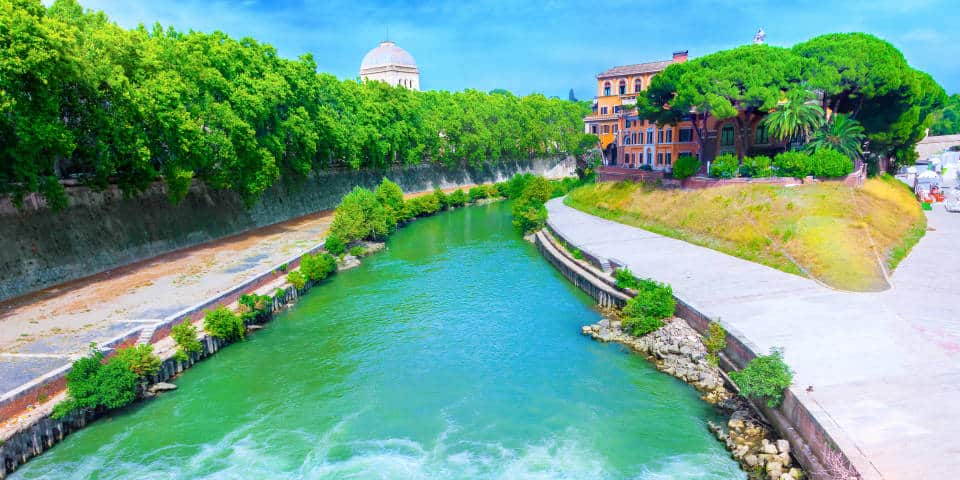 The Tiber Island (Italian: Isola Tiberina) is a unique part of Rome, situated on a sheet of water between the right and left banks of the Tiber River (Italian: Tevere). A neat boat-shaped piece of land is the only island in the river! It is connected to the two banks of the capital with the help of bridges since the days of antiquity.

The ancient name of the island is “Insula Inter-Duos-Pontes” that means “the island-between-the-two-bridges”. The Pons Fabricius (Italian: Ponte Fabricio, meaning “Fabricius’ Bridge”) connects the road leading to the Campus Martius (Latin for the “Field of Mars”, Italian: Campo Marzio) on the left bank of the Tiber River to the north-eastern part of the island. Meanwhile, the Pons Cestius (Italian: Ponte Cestio, meaning “Cestius’ Bridge”) allows you to walk from the southern part of the island to Trastevere, located on the right bank of Rome. 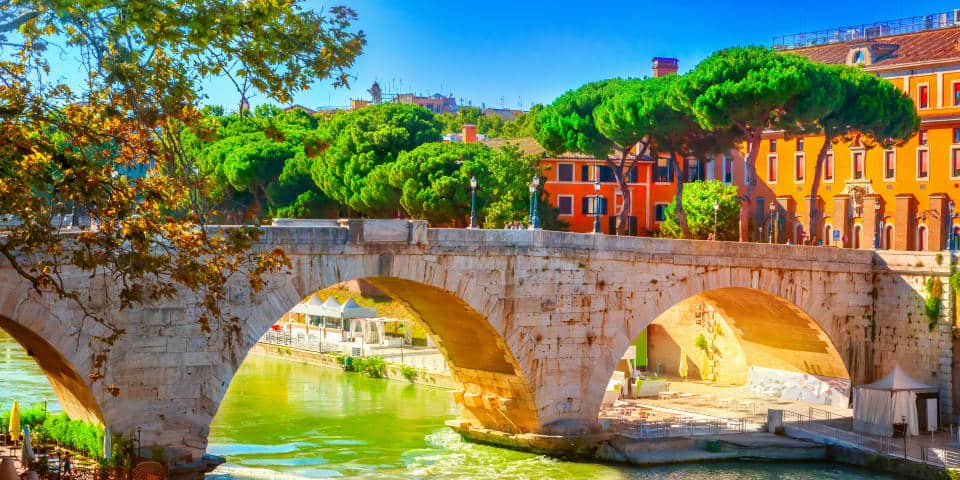 There is a legend about the Roman tyrant Tarquinius Superbus, who ruled an empire in the 6th century BC. He was so cruel and unjust to his people that the Romans dethroned him and drowned in the river. The tyrant’s body has gone to the bottom where the river mud and dirt formed an underwater grave around it. Over time, the place above this grave grew into the Tiber Island.

Since the Romans hated the dethroned ruler, the island remained not civilized until the 3rd century BC. By the end of the 3rd century, they decided to arrange a hospital – the Temple of Aesculapius on the territory of the island during the height of the plague.

Another legend says that the island, as a place for the construction of the temple, was chosen not just by chance. The Romans took a serpent, as an ancient symbol of medicine, and paddled with it in a boat down the Tiber. The coiled serpent left the boat and swam to the island. Thus, god Aesculapius (Latin for Asclepius) let them know where he wanted to see his temple.

Historians tend to believe that the temple was built on the island because of its remoteness from the main place of Romans’ residence. Over time, the temple of Aesculapius acquired a high status among the inhabitants of the capital and the Tiber Island became a revered and sacred place. The banks of the island were covered with travertine to make it look like a ship. In the center of the island, an obelisk was placed to symbolize a mast. 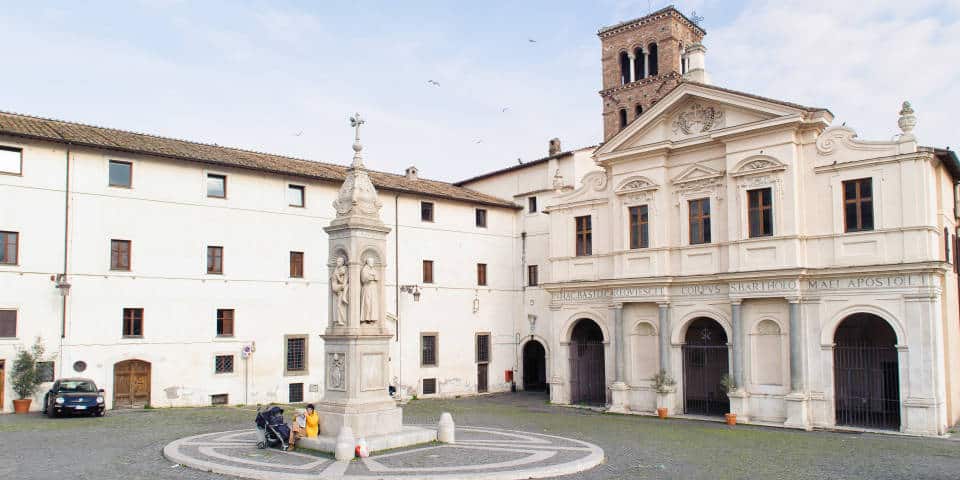 In 1584, the island became famous as a place associated with medicine again: a hospital (Italian: Ospedale Fatebenefratelli), which operates even nowadays, was opened there. The building is located in the western part of the Tiber Island and is subordinated to the Hospitaller Order of St. John of God (Italian: L’Ordine ospedaliero di San Giovanni di Dio).

The ancient obelisk was destroyed in the Middle Ages. In 1868, Pope Pius IX ordered to replace it with a new pillar. Architect Ignazio Jacometti created a monument decorated with statues of the four saints: St. Bartholomew, St. Paulinus of Nola, St. Francis and St. John. Fragments of the ancient obelisk are now kept in the museum in Naples. 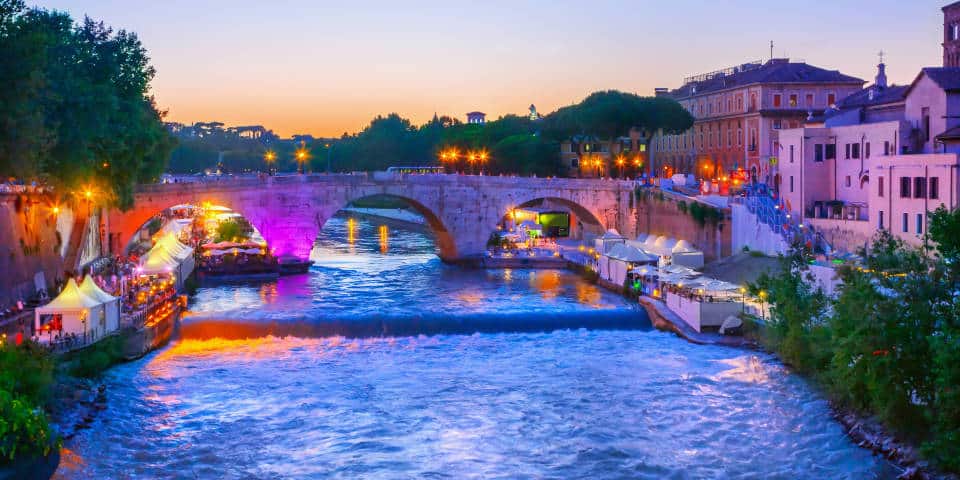 The island has been hosting an annual cinematographic festival “Isola del Cinema” every summer since 1995. Romans and visitors of the Italian capital can go into new Italian, European and world cinema on the big screen installed in the open air, from the middle of June till September. In addition, there are meetings with representatives of the film industry, poetry and literary events, short film competitions etc. 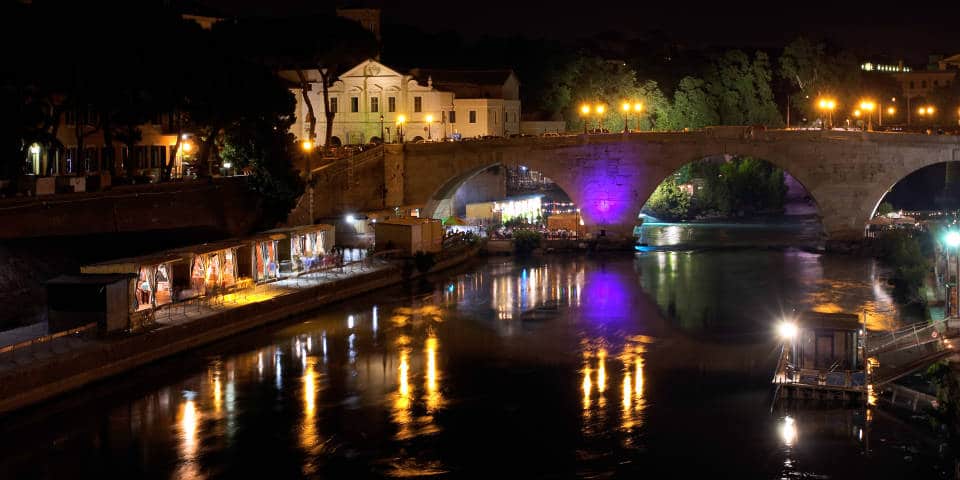 From the middle of June till the end of the summer on the waterfront from the island to the Pons Cestius, there is an evening fair with cocktails, snacks and live music – don’t miss it.