How to Get from Rome to Pompeii 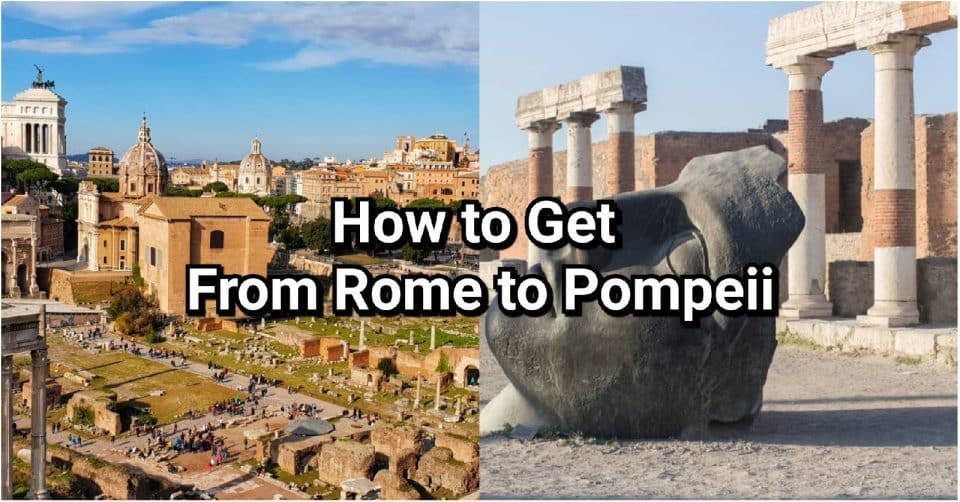 It is an amazing idea to visit the ruins of Pompeii from Rome, which is Italy’s most popular archaeological excavation. Since there is no direct train, the best option is to get to Naples from Rome and then to Pompeii. The distance is 242 km. The journey will take from 2 hours 30 minutes to 4 hours.

Train from Rome to Naples

There are about 16 trains per day that you can take to reach the station nearest to the Pompeii ruins from the Roma Termini train and bus station. If you travel from the Rome Fiumicino Airport, you have to take the Leonardo Express shuttle train to the Termini railway station. Then, it would be best if you had a train which goes to Naples (Napoli Centrale). Talking about Rome Ciampino airport: take a bus or taxi to Termini station and then a train to Naples.

There are different types of trains that run between Rome and Naples: 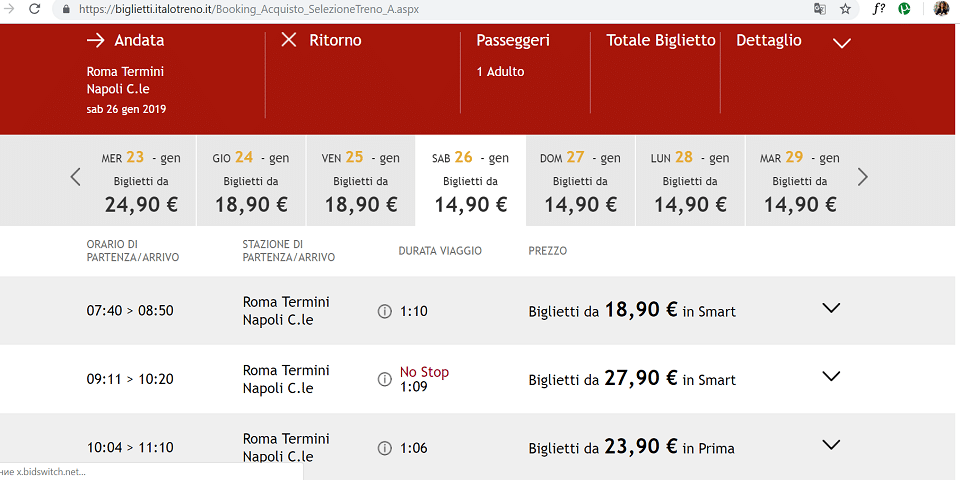 There are two main companies that provide train tickets: Italotreno.it and Trenitalia.com

You can easily purchase train tickets online or at any station. Note: prices for tickets are much lower if you buy them in advance. In addition, both companies often provide customers with special offers and discounts. However, such kind of tickets is not refundable.

Train from Naples to Pompeii

When you reach Naples, take a Regional train (Regionale) to Pompeii. There are two train lines: the Metropolitan Railway that runs between Naples and Salerno with a stop at Pompeii and the Circumvesuviana train service that stops during the journey to Sorrento. You can buy tickets online app.italiarail.com. 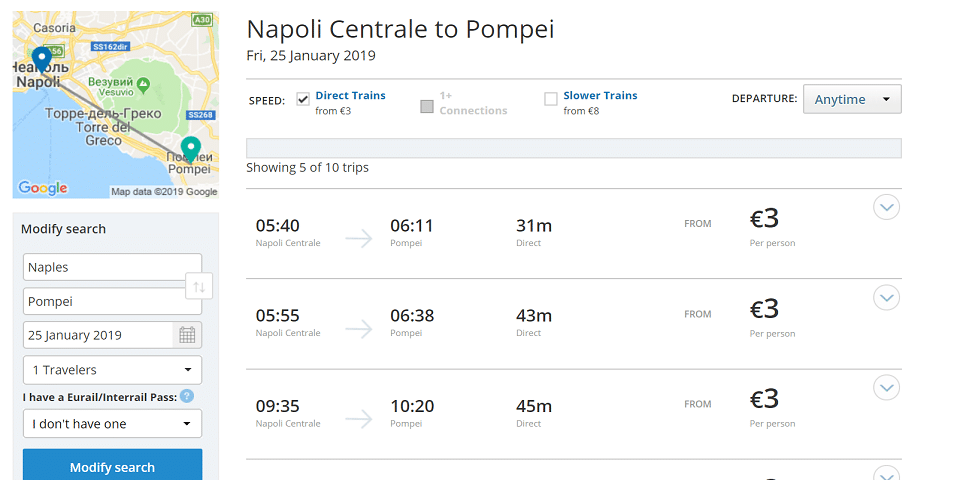 The Circumvesuviana trains are more popular. The train station is right next to one of the main entrances at Pompeii. Both Circumvesuviana and Metropolitan Railway trains run from Naples Garibaldi station, which is physically part of Naples Centrale Station

Another option is to get to Pompeii from Rome by traveling from the Rome Tiburtina station (on the Metropolitana subway blue line) by bus – we recommend buying tickets online on flixbus.com.

This option is the cheapest one since the one-way ticket price starts from 9.99 euro per person. 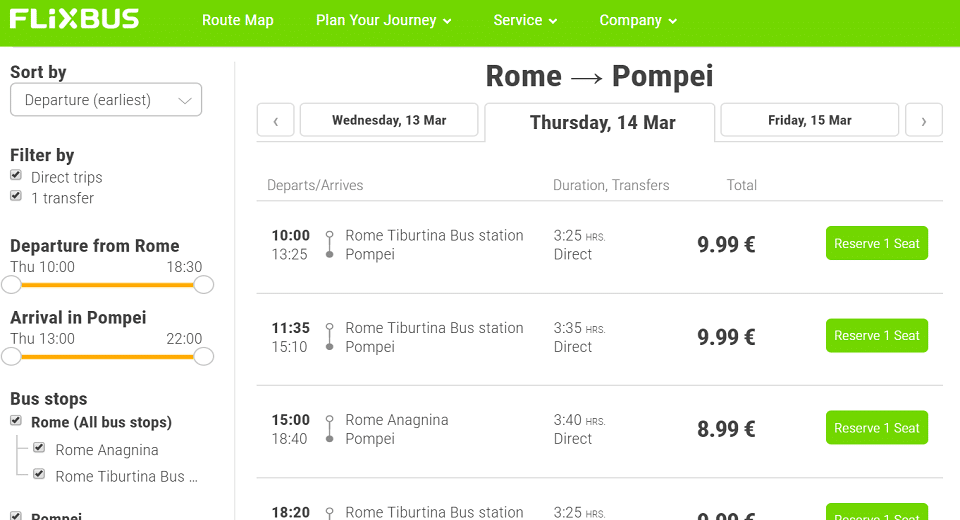 There are direct buses from Rome Tiburtina station or Rome Anagnina to Pompei. The journey takes about 3 hours 25 minutes. You can buy tickets online here

You can reach Pompeii from Rome by car in 2 hours 50 minutes. The distance is 242 km. Moreover, there are many interesting and beautiful cities and towns nearby Pompeii. For instance, you can visit towns of the Amalfi Coast, such as Sorrento and Positano. Of course, it is worth visiting Naples during your trip to Pompeii. One of the best ideas on what to do in Naples is to try the famous Neapolitan pizza. 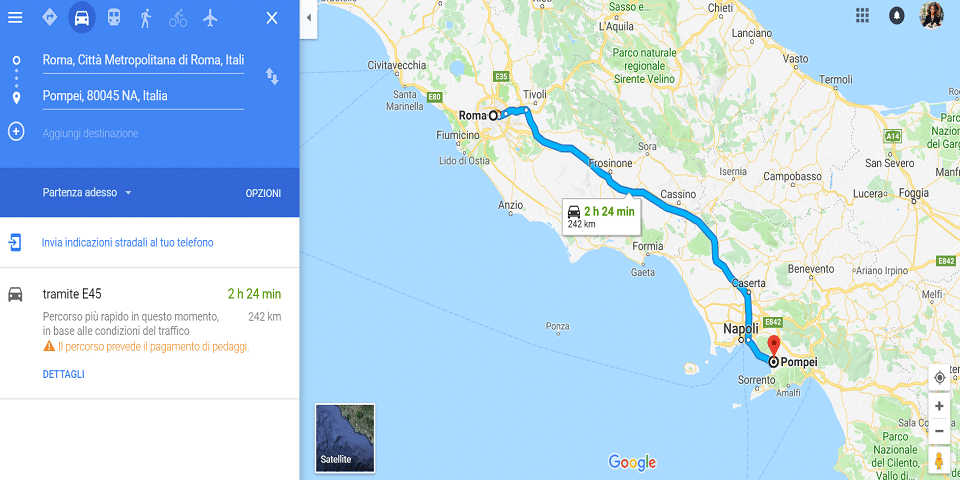 You can rent a car by www.rentalcars.com online service. Prices for car rental from Rome Fiumicino airport start from 10 euro per day

First constructions on the site date back to the 8th century BC, when the Oscans, citizens of the central part of Italy, founded five villages there. Later, when the Greeks arrived in Campania from around 740 BC, Pompeii entered into the orbit of the Hellenic people. During that time, the most important building was the Doric Temple, and the cult of Apollo was introduced. In addition, the location was used as a safe port by the Greek and Phoenician sailors.

Around the 6th century BC, a single community was created, which territories located on the crossroad between Cumae, Nola, and Stabiae, surrounded by a tufa city wall. Later, in 524 BC was the first settlement of the Etruscans. The same as the Greeks, the Etruscans did not conquer the city militarily. Pompeii became a member of the Etruscan League of cities.

Many important buildings were created in that period as Jupiter’s Temple and the Basilica, the House of the Faun, the Temple of Iside. Under Roman rule, Pompeii became at first a “municipium” and then a colony “Veneria Cornelia Pompeianorum” since it was ruled by the dictator Publio Cornelio Silla (89 BC). Thus, Roman architectural and cultural styles highly influenced Pompeii, and many patriciate families lived there. Moreover, the Temple of Augustus and the Building of Eumachia were created in 1 century AD.

In 62 or 63 AD, there was a strong earthquake, and the Roman senate ordered the town’s reconstruction. However, on 24 th of August 79 AD, an eruption of the volcano Vesuvius destroyed the whole Pompeii, Herculaneum, Stabiae, and Oplonti. Thus, all forms of life disappeared from the territory of famous ruins that nowadays millions of tourists visit every year.

The last eruption of the Vesuvius volcano happened in 1944. Despite the fact that today people are aware of its danger, the area around the volcano is highly populated

You can buy tickets at a ticket desk or for an additional cost of 4 euro per adult, and there is a pre-purchase that will allow you to skip the ticket queue. You can buy skip-the-line tickets to Pompeii on www.getyourguide.com.

Have you ever visited the ruins of Pompeii? 🙂

How to Get from Ciampino Airport to Rome City Center

How to Get from Rome to Tuscany

How to Get from Rome to Milan

How to Get from Rome to Pisa

How to Get from Rome to Positano

How to Get from Rome to Sardinia