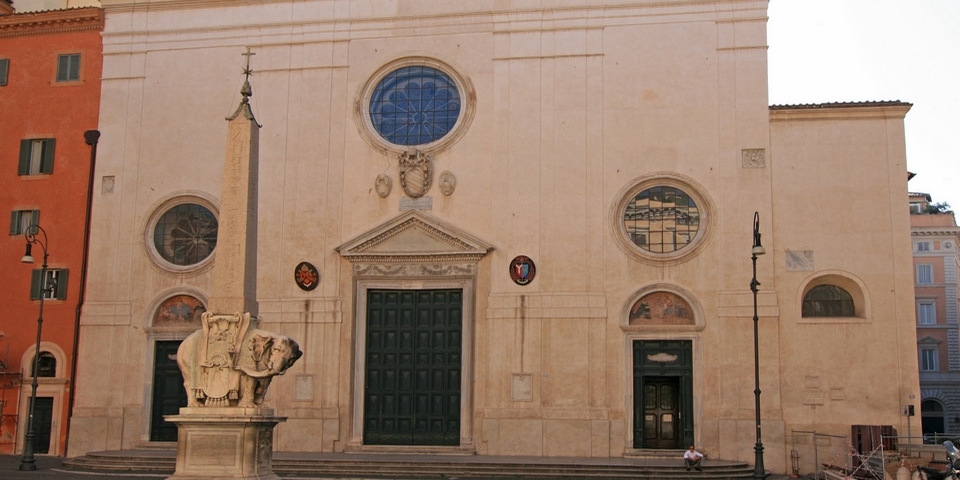 The basilica has its name because it was built directly over the ruins of foundations of a temple dedicated to the Egyptian goddess Isis, which had been ascribed to the Greco-Roman goddess Minerva

In the area nowadays occupied by the Basilica of Saint Mary above Minerva and by the former ex-convent, stood three temples dedicated to Minerva, Isis and Serapis. In the 8th century, next to these temples stood a small church that pope Zachary conceded to Basilian nuns who fled the East.

In 1255, by the order of Alexander IV the church run into belongings of the Benedictines of Campo Marzio

Later, in 1256, the brother preachers settled there and in 1275, they also received the property of the Church because of the intervention of brother Aldobrandino Cavalcati. The convent of Saint Mary of Minerva remained for about 10 years under the direction of the first Dominican convent of Rome: that of Santa Sabina.

At the beginning of the 14th century, the Dominican reality became one of the most significant in Rome and welcomed more than fifty brothers. Later, from 1557, the first titular cardinal of the church, Michele Ghislieri, became the Pope in 1566 under the name of Pius V.

In 1577, Giovanni Solano (buried in the Basilica) established in the convent of the St Thomas Aquinas college, which is the Pontifical University of Saint Aquinas (Angelicum) nowadays, in order to ensure an intellectual and spiritual formation for Dominican brothers from Italy.

Between 1797 and 1814, during the French occupation of Rome, the convent was used as infantry barracks, which led to serious damage. In 1810, there were changes because of the suppression of religious orders as the brothers were forced to abandon their convent and to disperse. They managed to return in 1825.

Absolutely dispossessed in 1871 by the Italian State, which is the current proprietor of the convent, the brothers could only get the authorisation to return in 1929 and to utilize certain parts in order to officiate the Basilica

In 1288 the theology component of the provincial curriculum for the education of the friars was moved from the studium provinciale at the Roman basilica of Santa Sabina to the studium conventuale at Santa Maria sopra Minerva which was redesignated as a studium particularis theologiae. At different times in its history this studium served as a studium generale for the Roman province of the Order.

Offices of the Inquisition

On 14 September 1628, by papal proclaim, the convent of Minerva was assigned as the seat of the Congregation of the Holy Office. It in this way became the place where the tribunal of the Roman Inquisition set up by Paul III in 1542 held the Secret Congregation gatherings during which the sentences were read out.

It was in a room of the Minerva Convent on 22 June 1633 that the father of modern astronomy Galileo Galilei, after being tried for heresy, abjured his scientific theses in support of the Copernican theory

In the late 18th and early 19th century the suppression of religious orders hampered the mission of the Order and the College of St. Thomas. During the French occupation of Rome from 1797 to 1814 the College declined and indeed briefly closed its doors from 1810 to 1815. The Order picked up control of the convent once again in 1815, only for it to be expropriated by the Italian government in 1870. 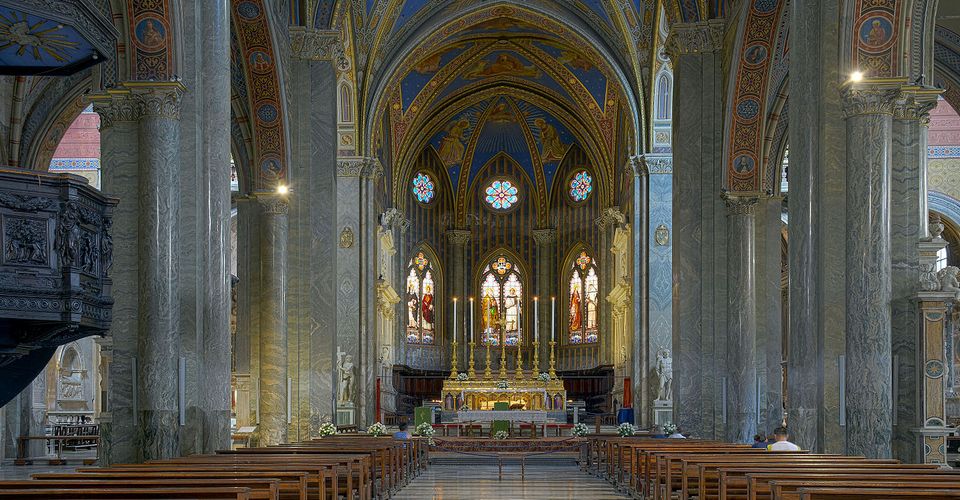 Among several important works of art within the church are Michelangelo’s statue Cristo della Minerva (1521) and the late 15th-century (1488–93) cycle of frescos within the Carafa Chapel by Filippino Lippi. The basilica too houses numerous funerary monuments counting the tombs of Doctor of the Church; Saint Catherine of Siena (1347-1380), who was a part of the Third Order of Saint Dominic; the Dominican friar Blessed John of Fiesole (Fra Giovanni da Fiesole, born Guido di Piero) better known as Fra Angelico (c. 1395-1455); and ornate monuments to the Medici Popes: Leo X (born Giovanni de Medici, c. 1475-1521) and Clement VII (born Giulio de Medici, c. 1478-1534), designed by Baccio Bandinelli.

The Carafa Chapel, with late 15th-century frescoes (1488–1493) by Filippino Lippi, was commissioned by Cardinal Oliviero Carafa in respect of Saint Thomas Aquinas. There are two Marian scenes, the Annunciation and the Assumption; over the altar is his St Thomas showing Cardinal Carafa to the Blessed Virgin, and on the right-hand wall his Glory of St Thomas. It was introduced in 1493, and is additionally known as the Chapel of St Thomas Aquinas.

The relics of St Thomas Aquinas were kept in this chapel until 1511, when they were moved to Naples. Designed by Pirro Ligorio in 1559, the tomb of Gian Pietro Carafa, who got to be Pope Paul IV in 1555, is also within the chapel.

The chapel is also known as the Chapel of the Rosary. The stucco ceiling was made in 1573 by Marcello Venusti. The chapel contains the tomb of Cardinal Domenico Capranica by Andrea Bregno. 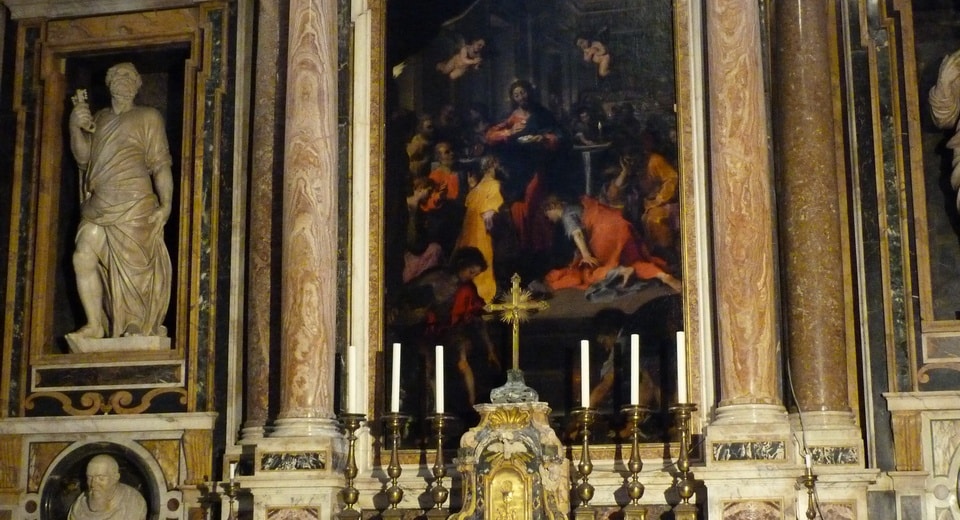 The Aldobrandini chapel was planned by Giacomo della Porta but it is Carlo Maderno that completed della Porta’s venture (after 1602). It was consecrated in 1611. The canvas portraying the Institution of the Eucharist and dated from 1594 is by Federico Fiori. The monument to the guardians of Pope Clement VIII, Salvestro Aldobrandini and Luisa Dati, is by Giacomo della Porta. The primary Confraternity of the Blessed Sacrament to be approved by the Holy See was set up in this chapel, with St. Ignatius of Loyola as one of its earliest members.

The chapel devoted to Raymond of Penyafort houses the tomb of Cardinal Juan Díaz de Coca, by Andrea Bregno. The ceiling fresco Jesus Christ as a Judge, between two angels is by Melozzo da Forlì.

The Risen Christ by Michelangelo 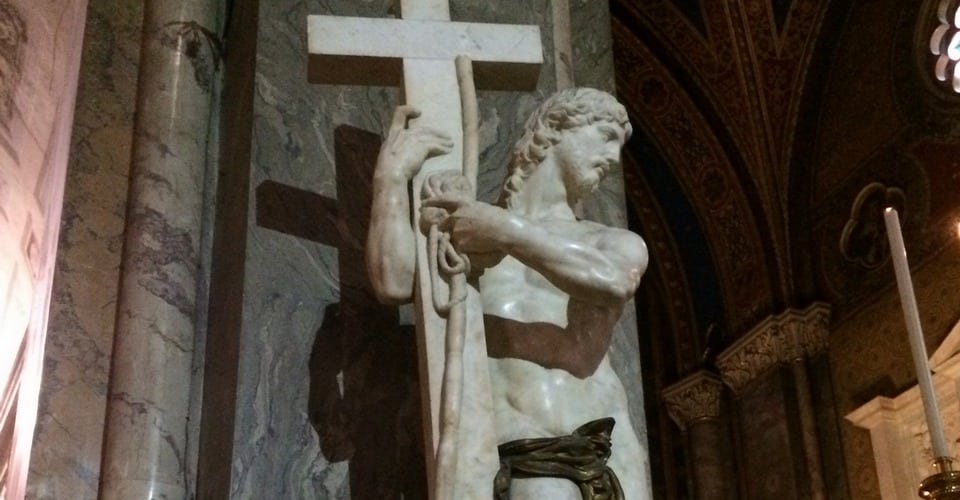 The Risen Christ, Cristo della Minerva in Italian, also known as Christ the Redeemer or Christ Carrying the Cross, is a marble sculpture by Italian High Renaissance master Michelangelo, finished in 1521.

The work was commissioned by the Roman patrician Metello Vari, who claimed that only the nude standing figure would have the Cross in his arms, but left the composition entirely to Michelangelo

Michelangelo had a problem because the marble he started carving was defective and had a black streak in the area of face. The master had stopped work on the “Risen Christ” due to blemish in marble and he started to work on another project, the San Lorenzo facade. However, he ordered a new marble block from Pisa which was to arrive on the first boat. The “Risen Christ” was finally finished in 1521 and transported to Rome. Michelangelo’s assistant, Pietro Urbano, installed the statue at the left pillar of the choir in the church Santa Maria sopra Minerva.

The Elephant and Obelisk

Elephant and Obelisk is the base of the smallest obelisk of Rome. There are other 12 ancient obelisks present in Rome nowadays. The statue is a sculpture designed by Gian Lorenzo Bernini. The elephant was probably executed by his assistant Ercole Ferrata, while the Egyptian obelisk was uncovered during nearby excavations. It was unveiled in February 1667 in the Piazza della Minerva in Rome, adjacent to the church of Santa Maria sopra Minerva, where it stands nowadays.

The Basilica located right behind the Pantheon in the historical center of Rome. Read more about top 30 attractions to visit during your stay in the Eternal city.