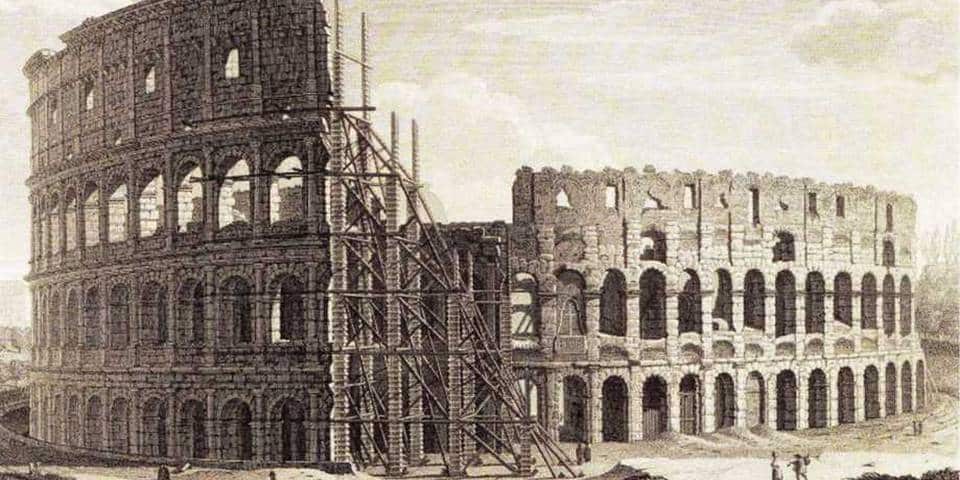 The Colosseum (Colosseo) construction began under the emperor Vespasian in 72 AD and was finished in 80 AD under his son Titus. The site chosen was a flat area between the Caelian, Esquiline, and Palatine Hills. In addition, a canalized stream ran through the site. The area was inhabited by the 2 century BC and was devastated by the Great Fire of Rome in 64 AD. Consequently, emperor Nero used the main part of the area as his domain. Domus Aurea and an artificial lake surrounded by pavilions, gardens, and porticoes were built there. Consequently, much of the Domus Aurea was removed, the lake was filled in, and the site became the location for the Colosseum.

After the war, around 100.000 Jewish prisoners worked on the massive construction. Moreover, the enslaved people undertook manual labor. For instance, they worked in the quarries as Tivoli, where the travertine material was quarried and transported stone 20 miles from Tivoli to Rome. Along with them, teams of professional Roman engineers, painters, builders, and decorators worked on the construction. As a result, the Flavian Amphitheater was constructed with wood, limestone, cement, mortar, and tuff materials.

How Large is Vatican City?

How much does it cost to get into the Colosseum?

How far is the Colosseum from Rome city centre?

How far is it from the Colosseum to train station?