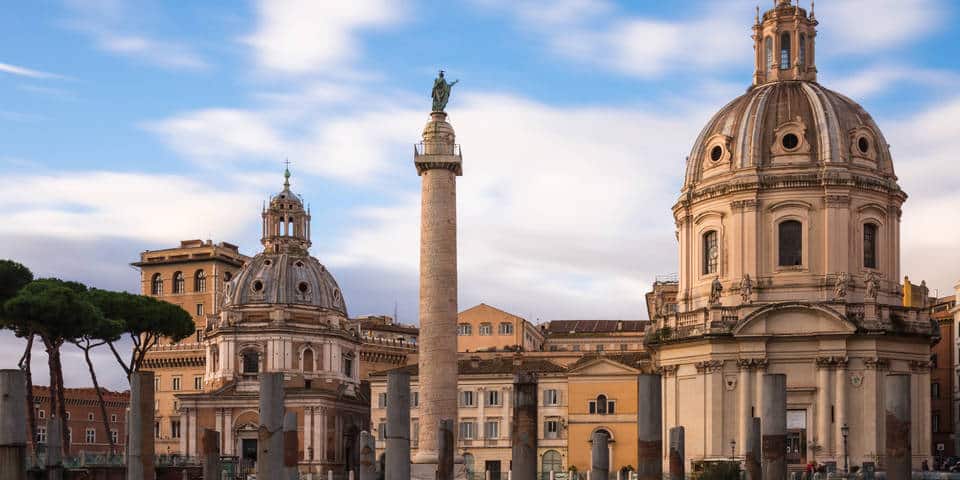 There are many amazing architectural corinthian, doric, and ionic columns and ancient Egyptian obelisks in Rome, where most of them were erected to the glory of the emperors. However, the most famous Roman pillars were created in the centuries of the rule of Marcus Aurelius, Trajan, and other significant historical figures.

The creation of memorable columns is closely connected with the concept of Triumph (Latin: triumphus). In ancient Rome, the column was a monument designed and dedicated to the emperors who won many battles. 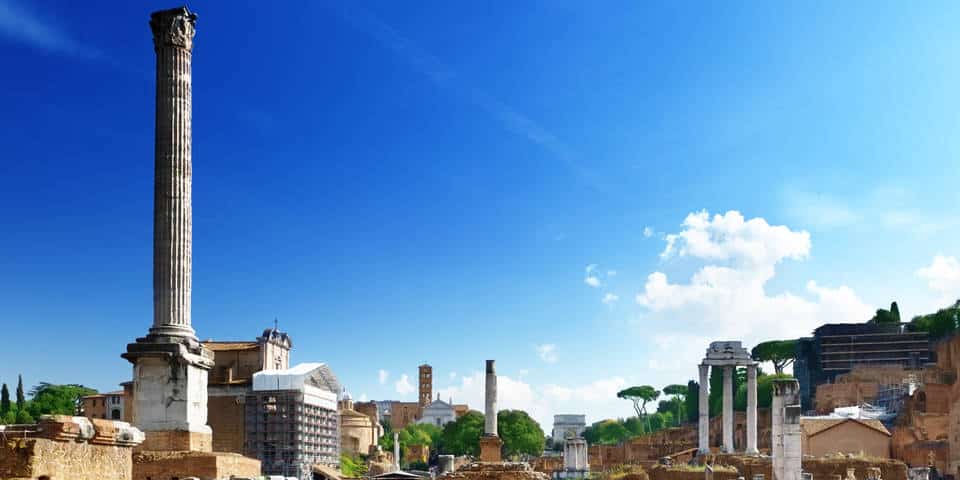 The Column of Marcus Aurelius (Colonna di Marco Aurelio) was built in 176 A.D. to celebrate the emperor’s victories and is located in front of Palazzo Chigi. It has 42 meters high, and there are many reliefs along a spiral column with the bronze statue of Marcus Aurelius on the top. However, the statue was destroyed and replaced by the bronze statue of St. Paul in 1589. 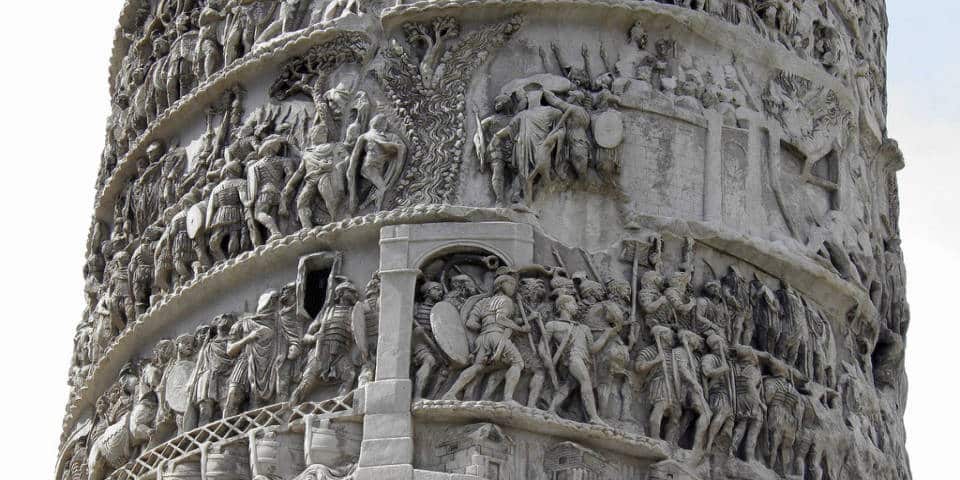 There is a belief that the tradition of establishing triumphal columns in ancient Rome began precisely at the time of Emperor Trajan (Latin: Marcus Ulpius Nerva Trajanus). The Roman ruler conducted a protracted military campaign against the tribes of the Dacians (Latin: Daci). As a result, it was possible not only to crush the generals in battle but also to annex the territories of the Dacians by the new region of the Roman Empire.

In 113 A.D., Trajan asked the artist and architect Apollodorus of Damascus (Latin Apollodorus Damascenus) to start works on the stone pillar. As a result, the commemorative obelisk was made of Carrara marble, weighing about 40 tons. Moreover, the total height of the memorial is 38 m, and it is made up of 20 parts.

The Column of Antonius Pius (Colonna di Antonino Pio) was built in 161 A.D. Initially, a column of red granite was placed on a pedestal, decorated with carvings, and topped with a statue of Antonius Pius. After the fall of the Roman Empire, the column was for a long time in an abandoned state. The memorial’s foundation went underground; part of the column was irretrievably lost.

Finally, in the 17th century, the column was removed from the underlayer of earth, thanks to the efforts of Carlo Fontana. The pedestal survived well; it was restored and preserved for descendants. But the surviving part of the granite column was later used for facing the obelisk in Montecitorio (Palazzo Montecitorio). 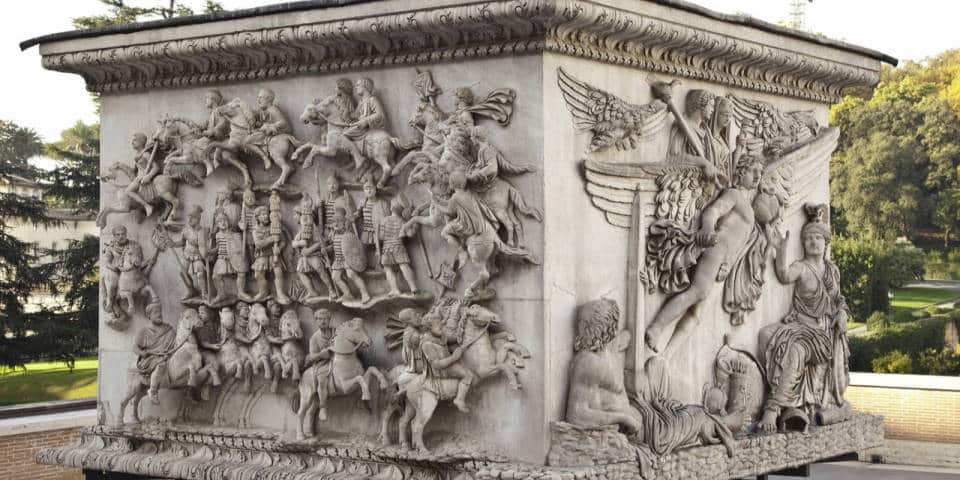 Today, you can admire the memorial of Antonius Pius during a visit to the Vatican Museums (Musei Vaticani). Only the surviving pedestal is displayed, depicting the emperor rising to heaven. Symbolic images of Rome and the Mars field are distinguished among other reliefs.

The Column of Phocas (Italian: Colonna di Foca) is the final point in constructing the Roman Forum (Latin Forum Romanum). In 608 A.D., a white marble column which is 13.6 m high was installed nearby Oratorium Tribune and is dedicated to Phocas, the Byzantine emperor.

When Christianity was not divided into Orthodoxy and Catholicism, the friendship between Byzantium and Rome was strong enough. It is believed that at the top of the column stood a gilded statue of Phocas, commissioned by the Pontiff Bonifatius IV. It is noteworthy that after the overthrow of Emperor Phocas, all references to his greatness were destroyed, including the column established at the Forum. 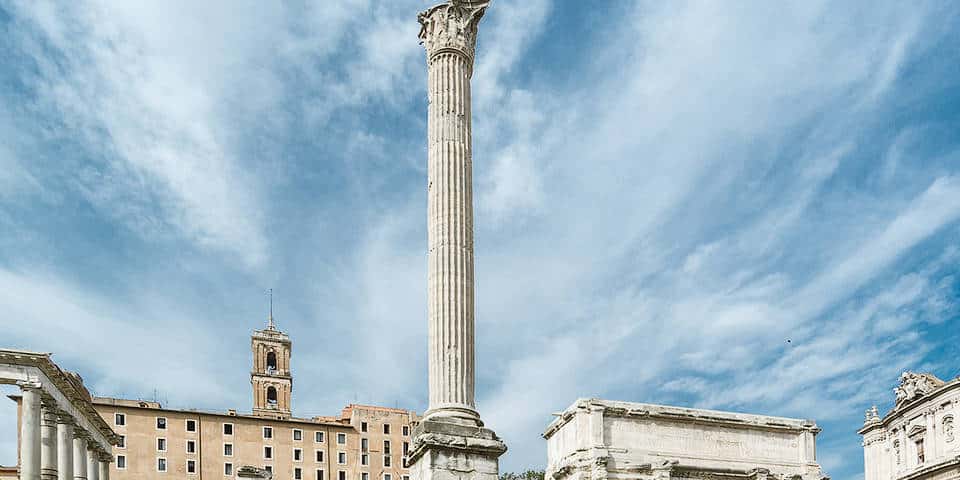 Column of the Immaculate Conception

The Column of the Immaculate Conception (Italian: La Colonna della Immacolata) is located on the Spanish square (Piazza di Spagna). At the end of the square was the embassy of Spain, and the column was erected in 1854, dedicated to the Virgin Mary’s birth.

The column was designed by Luigi Poletto, while the statue of the Virgin Mary was created by the sculptor Giuseppe Obici. Ferdinand II, the king of Sicily, ordered the construction of this monument. Starting from December 1953, the pontiffs annually place a bouquet at the foot of the column as a sign of respect for the Immaculate Conception. 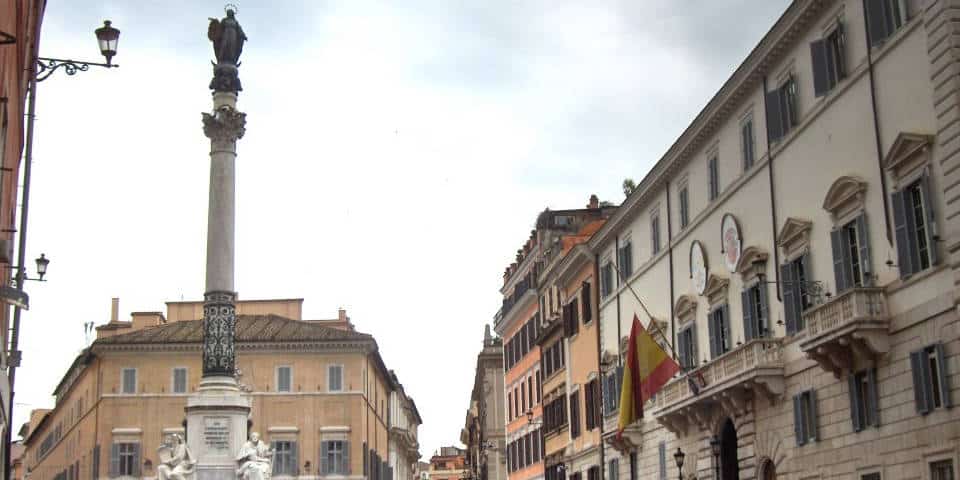 At the foot of the 12-meter marble column are the four biblical sages: Moses, Isaiah, King David, the seer Ezekiel

All Columns on Map

I would like to highlight the importance of unique ancient columns located in the Eternal City. Their significance and impressive details went through centuries; even nowadays, columns are an irreplaceable feature of Rome.

Thank you for article and column man, really helpful.