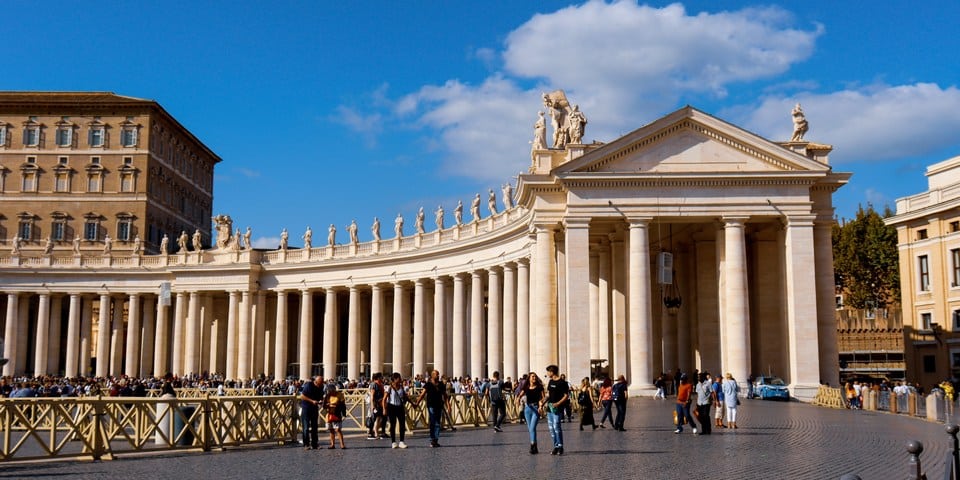 The Vatican’s history as the seat of the Catholic Church began with the construction of a basilica over St. Peter’s grave in Rome in the 4th century A.D.

The Pope used to rule the Papal States, which included most of Italy. Catholic popes tried to stop Italy from becoming one country because they feared to lose the control of at least one of the Papal States. In 1861, Italy was unified under the King of Savoy, but Rome and Latium remained unconquered. On September 20, 1870, Italian troops invaded and Rome became capital of the new kingdom. In 1929, Benito Mussolini decided to sign an agreement with the Holy See, called the Lateran Treaty, which established the Vatican State.

One night I was drawing a scene from the inside of the Basilica, a scene from within the main hall i believe. I spent about an hour on the pencil drawing before having a lengthy conversation with my father on the phone for much longer than we usually talk, then I retired to my bed for the night. When I awoke I noticed that someone had written what at first appeared to be just jargin, in the form of a few sentences, right across the page and just beneath where I had spent an hour the night before creating my drawing.
I at first assumed that someone was playing a prank or a joke on me, you know, a friendly but unwelcome or unwanted act. Immediatly I walked down the hall to investigate who the culprit was. Only to find that there were no people upstairs to even interrogate. Upon going downstairs and questioning my aunt Diana, I find that there was no one home that night and everyone was accounted for and known to be elsewhere for the entirety of the previous evening. Once finding this out I go upstairs again and down the hall to the back bedroom where the notepad was sitting on the bed. Upon closer examination, the more that I looked at the writing, I started to realize that the words were written in my own hand writing!
Now, I have never been known to be a sleep walker, a sleep talker, sleep eater, or sleep writer. Before this incident, I had never know of an instance where I did any one of the things mentioned. Even more unbelievable for me, was once I looked even further at the writing, I realized that half of the words in the three sentences which looked like jargin to me at first appeared to be an actual script of some kind, I just wasnt familiar with which kind or what language it was. After using Googles search engine I was quickly able to discern that it was, and unbelievably so, actually Hebrew! Now, my right hand on the holy bible, I can swear by everything ive ever believed in, that I did not believe what I was seeing for my own eyes,  and futhermore that I know nothing of any kind of Hebrew whether that of the verbal, written, nor the read word variety. What the words translated to completely, and instantly floored me right to my seat. If anyone knows of this type of experience happening to anyone and might be able to shed some light on to these happenings for me, I would very much so greatly appreciate it a million times over. I know it means something important and I literally have not even the slightest clue what, or what to make of all of this. It must not be a coincidence that I was drawing a scene from the Vatican church on that piece of parchment the night before. I was visited by, and communicated with by an entity that I very much do not understand or recognize.